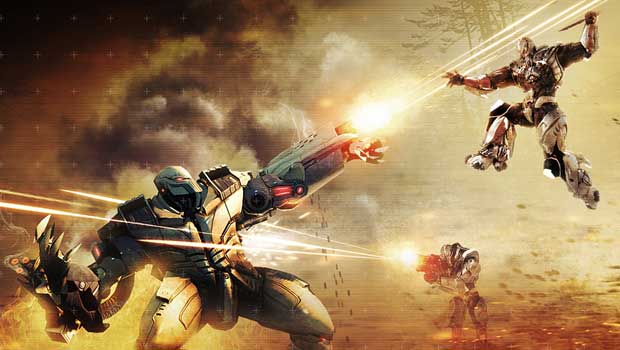 Section 8: Prejudice is literally one of those games that comes out of nowhere. Set in the distant future at a time when Man has reached to the stars and began colonizing off world, the game features some of the best elements of our all time favorite Sci Fi releases. Prejudice takes place several years after the events of the original Section 8 game, the Hybrid Super Soldiers, once created to enforce Earth’s will across the galaxy have been disbanded, hunted and destroyed. Now a new force, the USIF and their Armored Infantry serve the role of peacekeepers and find themselves embroiled in a conflict against seditious forces who are receiving support from an unknown party. You start out as Alex Corde, descendant of the protagonist from the original title. A top enemy general has been captured, and then released during a daring daylight attack. You and your team of USIF Armored Infantry, code named Section 8, must pursue him and get to the bottom of the mystery surrounding his unidentified support. “In the distant future, humanity will call on its most fearless defenders to confront an emerging threat determined to eradicate all human life as we know it. Section 8®: Prejudice™ is a sci-fi first-person shooter with dynamic combat, where every decision – from customizing equipment to activating team based objectives – drastically impacts the battlefield.” – TimeGate Studios

Outstanding Multi player Experience – On or Offline, you can enjoy the Multi-player aspects of this game. In the Co Op Swarm Mode, you by your self or with a friend face an ever replenishing army of bots and must hold onto a control point for a set time. That’s not too bad, but what I liked was the ability to start a full Multiplayer Conquest Mode and populate it either entirely or at least partially with bots. So if you are up for some Multi player action, but either have no online connection or are just feeling antisocial, you can still get your game on.

Intelligent AI – Not really certain how much I really liked this, but I have to give the game credit. In either Single or Multi player, the AI did a wonderful job. You’ve got several levels of difficulty, but even at the easiest level the enemy will take cover and attempt to outflank you. You be surprised, and probably frustrated as the enemy forces heal one another, use tools to drain your health, and camp on Supply Depots that not only replenish their ammo, but their health too. At one point in the game, I had to revert to camping on the Depot myself just to withstand the onslaught.

Great Graphics – TimeGate did a wonderful job here, not only is the tried and true Unreal Engine a good choice to build upon, but the actual animations give you an almost space opera feel to the game. Visually it is very similar to Halo in a lot of ways, but with elements of WarHammer 40, 000 thrown in. I noticed no major hiccups during game-play at all. The animated cut scenes stand out nicely, and do not detract from the overall game, but rather serve to move it along to the next level.

Jetpacks! – Hey, any game where you can zip along above your enemy, firing rocket launchers as he runs away is okay in my book. Section 8 has the jetpack assisted leaps, which allow you to hover for a short period of time, or reach a higher elevation. Forward movement is possible so you can breach gaps, collapsed bridges and other obstacles. Another mechanic in the game is Overdrive, which allows you to run blindingly fast after a short sprint. With Overdrive, you can often outrun enemy forces and get to your next destination rather quickly. Best yet, you can combine the two, toggle your Overdrive and begin moving, then jump and watch as you get catapulted across the map faster than a politician backpedaling.

Value – For all the features included, and the promise of more free DLC to come, TimeGate has created a title that could easily garner a 40 Dollar price tag, or even higher. But by keeping the downloads digital and staying true to their word, they instead handed us a title that cost about 15 Dollars USD.

Storyline- You know what? Every game has it’s drawbacks, so I have to point out a few here. I have no problem with the length of the storyline, it is just the execution. Rather than focus on developing plot detail, cliffhangers for future releases, and a little more background on the story, I was felt with a sense of being an errand boy, running from location to location for that next assignment. The action was good once you got there, but offered little in the way of difference from one scene to the next. Without playing the Single Player some though, you will be completely lost during Multi-player, as everything from actions to weapon customization are covered.

Variable Difficulty – At times it felt like the game’s difficulty level varied. Even though I kept it at a specific setting throughout my play-through, at times I found it nearly impossible to cross certain points. One of the earliest points is a level where you are trying to breach a secured fortress. In addition to hacking consoles at multiple locations and engaging enemy forces, you must also dodge the occasional friendly bombardment, thoughtfully plotted out for you on your HUD, but in a different location each time. And when I say bombardment, I mean just that, a full on artillery barrage, not just one missile or two.

Multiplayer Menu – As much as I love the Multi-player mechanics of Prejudice, I found actual menu portion a little difficult. While I could definitely start and host a game, I found no way that another player and I could go head to head with a second controller enabled. Of course, you won’t be able to do that with the PC version either, but to me it feels like I am missing out.

It doesn’t matter which platform you choose or prefer, we all have things we wish were done for us by the developers, TimeGate gave us everything we could ask for as a Gamer, and then took it a step further. With ongoing free DLC Support, Dedicated Servers, Integrated Bots, and the ability to have the same Multi-player experience while offline, you simply cannot go wrong. Could the game be better? Yes, but not by much.