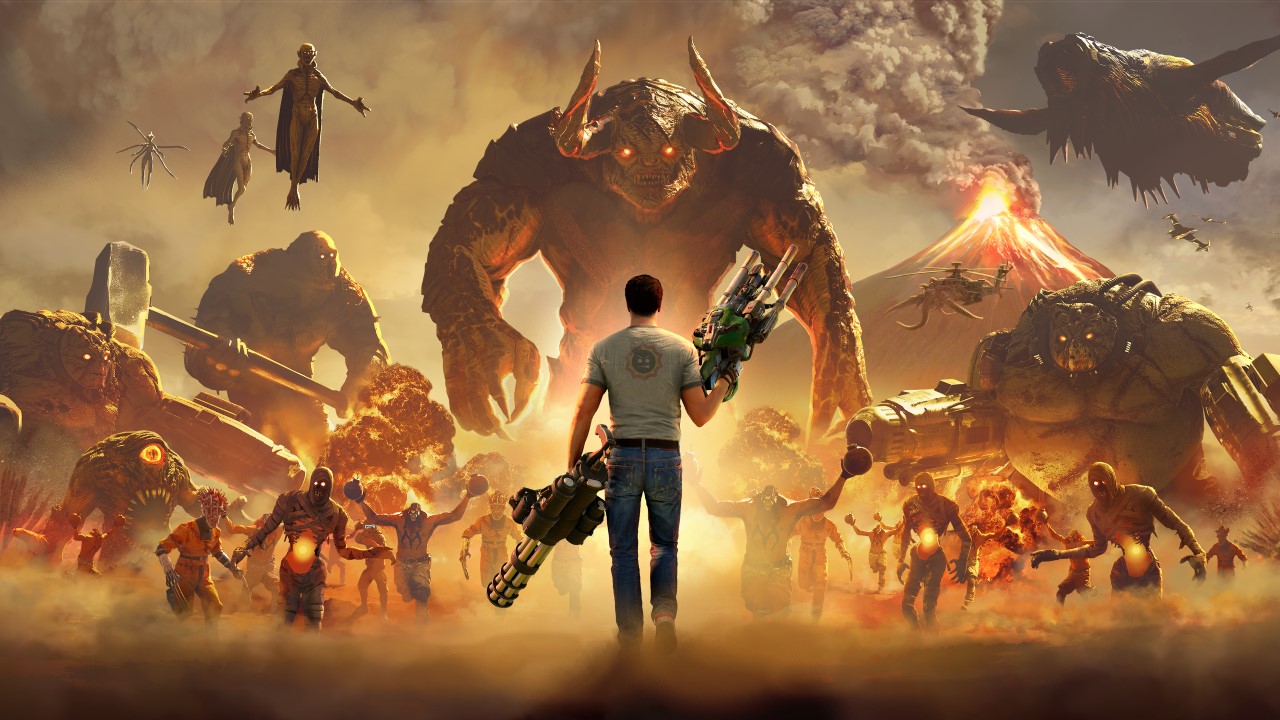 Serious Sam 4 “doesn’t fix what ain’t broke”, but after playing it I was left wondering what still worked. Croteam’s latest entry in the long-running franchise plays it too safe for comfort, and its marque new feature – the Legion System – isn’t worth the performance issues it creates. Serious Sam 4 has some serious problems, and unless you’re a diehard fan its many faults may be more than you can stomach.

Serious Sam 4 is as “boomer-shooter” as a game can get in 2020; one that often feels like it came out in 2008. The gameplay in Serious Sam 3 felt a bit out-of-date back in 2011, and Serious Sam 4 has done little to move the needle forward. If you’re an existing fan you may be overjoyed to hear this: you’ll still circle-strafe and backpedal around arenas killing hordes of enemies before they gib you. On the surface it’s still fun to franticly dash about spitting hot lead, and there are brief moments of brilliance within Serious Sam 4. Problem is, the game’s antiquated design often hinders more than helps.

Let’s start from the top: Serious Sam 4 is a prequel to Serious Sam 3. Mental is laying waste to what remains of the human race on Earth, and at this point in the story Sam is more concerned with acquiring the Arc of the Covenant than jumping back in time to ancient Egypt. He and his small team from the Earth Defense Force have been dispatched to Rome to grab the relic, and it’s on Sam to ensure Mental’s forces don’t get to it first.

Croteam pulled the co-writer of the exceptional The Talos Principle and his partner – Jonas and Verena Kyratzes – to pen the script for Serious Sam 4, and . . . bless them, they tried. Serious Sam 4 has an actual, honest to Mental story. There are cutscenes aplenty, a full lore page in the menu, and even audio logs to pick up. Considering Serious Sam as a franchise has always been more concerned with turning vast armies of aliens into a bloody pulp it’s a bit strange. Unfortunately, it’s also very boring.

The dialogue is as generic as it gets, and any attempts to humanize the members of Sam’s team come off as superficial at best. This is a rote story with forgettable characters that detracts from the main attraction: mass alien murder. If there is one highlight it’s Sam’s increased reliance on wit over one-liners, but even these lines are hit and miss. It doesn’t help that all the characters emote about as well as a storefront mannequin. The eyes – oh, the eyes! I’ve seen better facial animations and more expressive eyes in my Air Force training programs. They’re stiff, lifeless, and the lip-syncing seldom lines up with what’s being said.

Human NPCs all look like they came out of an HD remaster of an early-generation PS3 game, and not a good one. They make it hard to invest in the story, and the story isn’t worth investing in to begin with. I wish I didn’t have to spill all this ink about story, but it often feels like it detracted from what made this franchise great: wholesale slaughter with little to no downtime. Had the story and characters been worth a damn I wouldn’t have cared, but I’m stopped whenever I reach a checkpoint. I’m stopped whenever I find a side objective. I’m stopped far too frequently for some plot-beat I could care less about, when all I wanna do is point the business end of my pump-action shotgun at a gaggle of meaty bullet piñatas.

Croteam’s attempt to tell a worthwhile tale further handicaps the game via the stale level design. Do you like generic Italian streets and crumbling ruins? Cause that’s the game for the entire first half, barring one level that changed things up just a wee bit. The best part? The back half really isn’t any better. Don’t let the short first mission fool you: 80% of Serious Sam 4’s level design is seriously stale. This is a franchise set in the future during an alien invasion; there’s creative soil to till here. Serious Sam 4’s level design is excessively dry. 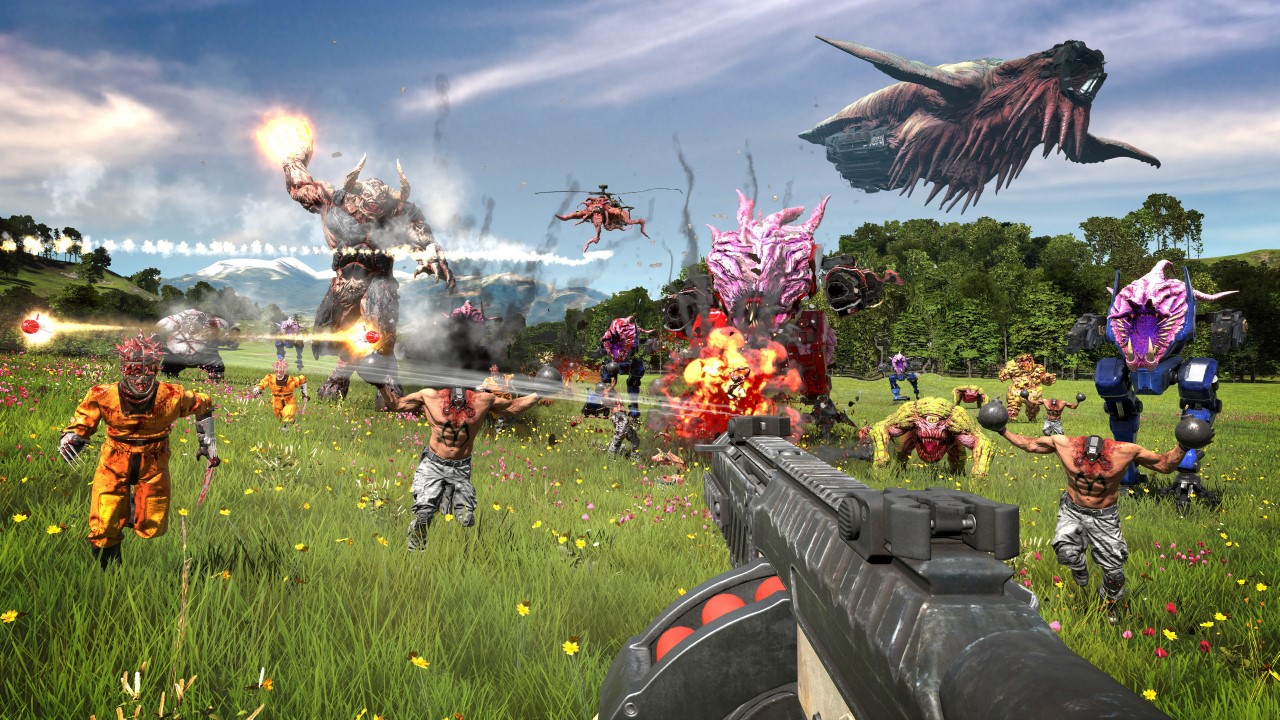 This affects the quality of the fights as well, because most of the arenas you find yourself duking it out within have geometry that’s easy to backpedal into, halting your movement and opening you up to a deathblow. So much for being a big, bold badass fighting off an invasion single-handedly. Even ancient Egypt in Serious Sam: The First Encounter, as repetitive as it was, felt better designed for a fight than the locales within Serious Sam 4.

Speaking of older Serious Sam games: Serious Sam 3 came out in 2011, and Serious Sam 4 often feels like a sequel that was released a couple years later, not a full nine. This game looks rough in motion. It barely holds up to today’s standards (the LOD distance is absurdly short, for instance), despite the bajillion graphics settings in the game. And the worst crime? Performance is subpar for how it looks. Framerates frequently ocillated between 130 FPS and 50 FPS with noticeable hitching and stuttering for no discernible reason, even at “Medium” settings on my arguably punchy rig (an i7-8700K @ 5.0Ghz and GTX 1080 Ti, with 16 GB of 3400Mhz RAM, while running at 2K resolution). The game automatically set me up with the Ultra preset, but that was rarely stable and led to multiple memory crashes.

Serious Sam 4 also loved to crash whenever its new Legion System got into full swing. I know the “recommended” specs suggest an 8-core CPU, but I expected the game to at least run when the screen was packed with enemies. Not well necessarily, yet not crashing to my desktop either. Despite a massive day-1 patch all these issues remained, which is worrisome.

There are good things to be found here though. Serious Sam 4 does come with some fresh improvements over previous games that are mostly good. There’s a skill tree now with unlocks that’ll allow you to dual-wield weapons, melee large enemies to death, and reload while sprinting. None of it is particularly inventive, but when the focus of your game is to kill everything as fast as possible they prove valuable in the mid to late game. Double-fisting two rocket launchers is a quick and efficient way to level the playing field, and punching a werebull to death is somewhat delightful (despite the terrible animations). There’s fun to be had here, and side objectives in each level tend to grant a new weapon, alt-fire, or gadget that shifts how you approach each fight.

These are good things, except for one itty-bitty problem: the Legion System will throw everything at you, and there are paltry few ways to stay alive in a fight within Serious Sam 4. Circle-strafing and dodge-jumping will only get you so far when there are literal hundreds of enemies assaulting you at once, both ranged and melee. Doom (2016) largely solved this problem by giving you a means to top off your health and ammo via combat, and Eternal even threw armor into the mix. Serious Sam 4 has two talents that kinda fit this purpose, but they provide such anemic amounts of resources they’re damn near worthless.

I’m complaining about this, because Serious Sam 4 has fights where health, armor, and ammo are respawned between waves, and it works! Yet, there were an equal number of fights where you’d be left with your thumbs up your ass, which caused the difficulty to spike randomly throughout the game. When combat in Serious Sam 4 sings, its an opera. When it doesn’t it’s like drunk karaoke with your coworkers: you may be surprised by one or two performances, but its mostly bad. 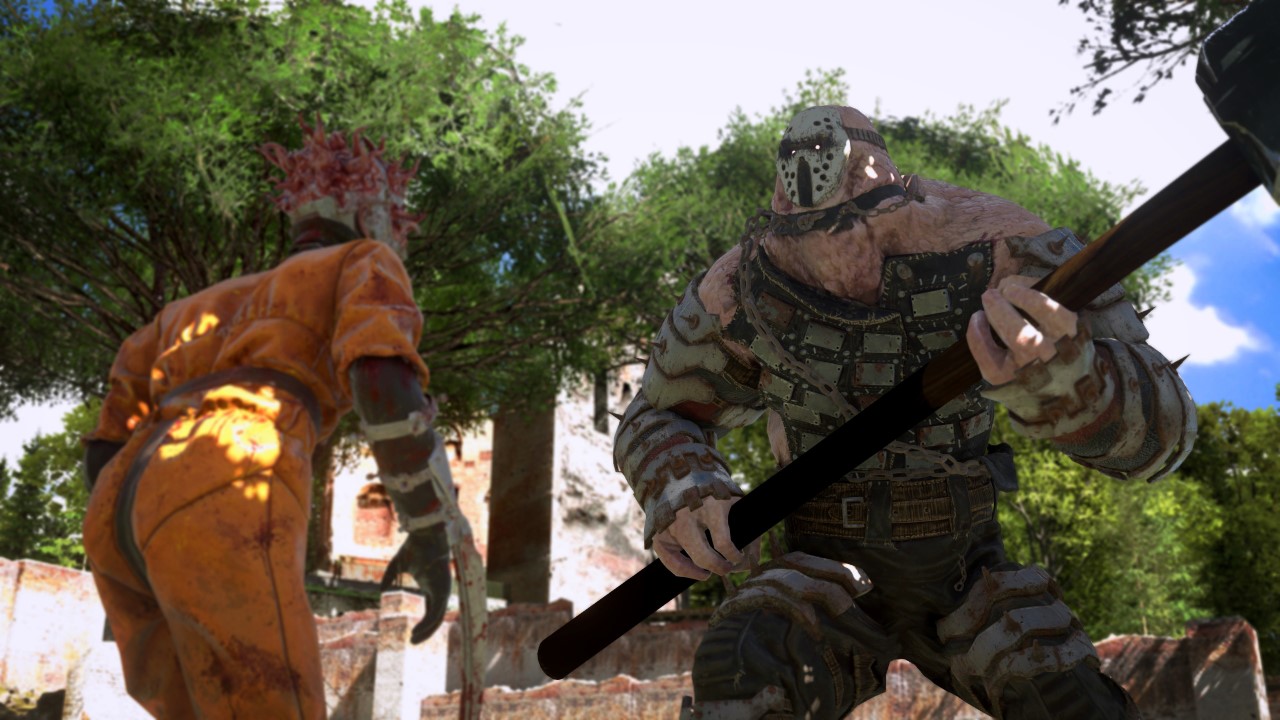 It’s such a shame, all of it. There are moments where you can steal the slimmest glimpse of greatness in Serious Sam 4. When combat is firing on all cylinders, and the Legion System isn’t crashing your PC, Serious Sam 4 is a decent slice of old-school shooter goodness. Yet, in sticking to its guns, Serious Sam 4 ends up being an aggressively mediocre experience.