Shinsekai Into the Depths Review

I still can't fathom how this started as an iPhone game. 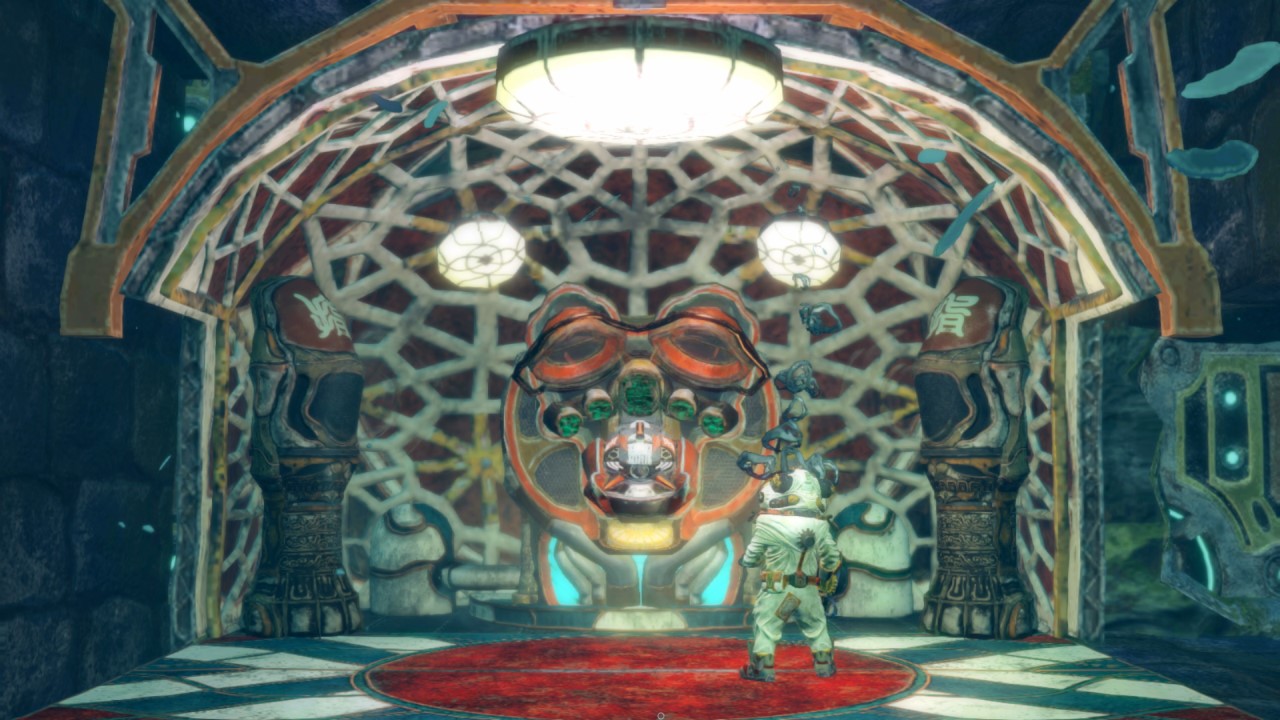 If you had told me during Nintendo’s Direct Mini that Shinsekai Into the Depths made its debut five months ago as a mobile game I would have called you a liar. As one of the Android faithful I’ve only heard of the Apple Arcade through friends and a few cursory articles from other websites, so I had little to no idea what sort of games were on it. But, I heard good things! Far as I knew they were standard mobile fare, but decent. No, I hadn’t a clue Sayonara Wild Hearts was on it either.

I’m tacitly throwing myself overboard here, because Capcom’s Shinsekai Into the Depths is of such high quality it’s changed how I view the mobile game market. If it wasn’t for the solid Nintendo Switch port I would have never known it existed, and having completed the game that would have been a damn shame. 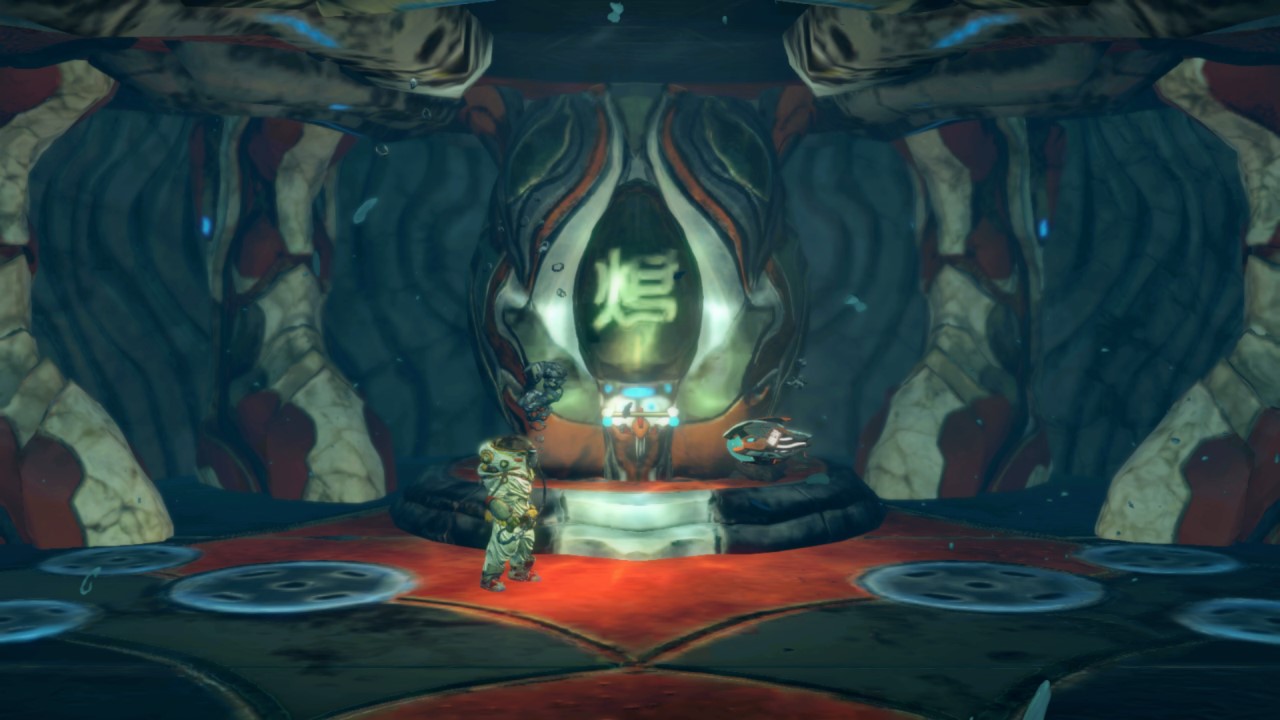 I dunno if that sentence tickles you as pleasantly as it does me, but I’ve a weakspot in my heart for good Metroidvanias, and Subnautica is perhaps the only survival game I’ve ever enjoyed. The idea of exploring a vast forgotten civilization under the murky blue, and having to push deeper and deeper still – well, it excites me! I’ve been scuba-diving for almost twenty years now, and I feel video games haven’t adequately covered what lurks below the surface of the sea near as much as I’d like, tortuous water levels aside.

Enter Shinsekai Into the Depths: a subnautical Metroidvania featuring a cryptic story, gorgeous storybook-meets-ancient Japanese maritime art aesthetic, and some of the best sound-mixing in an underwater title that looks like it released on the Xbox Arcade circa 2007. Graphically the game looks a full decade older than it actually is, which belies its mobile origins. The stellar art-design and hauntingly beautiful soundtrack do all the heavy lifting here (though the phenomenal audio-mixing certainly carries its weight as well). Witness Shinsekai’s humble birth and respect it, because every other aspect of the game is rock-solid.

You play as a nameless, voiceless protagonist in a diving suit with a mask that reminded me of a horseshoe crab. You live underwater, hiding from what appears to be the vast freezing over of the entire planet. Of course we need a call to action, so some descending ice destroys your home and forces you downwards. You float and jet-stream about some truly wonderful environments, always keeping a steady eye on oxygen reserves that also double as your health. Yep, land too hard or get smacked by one of the ocean’s more hostile denizens and you’ll lose a bottle of precious, precious air. You have to carefully judge your every movement for fear of an untimely death. Do you have enough oxygen to make it to the nearest pocket of air or save point? Are there fresh tanks nearby in case one of your bottles breaks?

As you panic over whether or not you’ll be able to breath you’ll stumble across a myriad array of harpoons and progression-advancing upgrades, to include a helpful little aquatic drone and a submarine with a drill that extends out of a goblin shark-esque mouth. It’s all rather charming, and mechanically familiar to anyone that has ever played one of these games before. Explore, find shiny things that unlock new areas, advance to said new areas and repeat. Shinsekai doesn’t deviate too far from the established formula, though it doesn’t quite share the same emphasis on combat as its contemporaries. 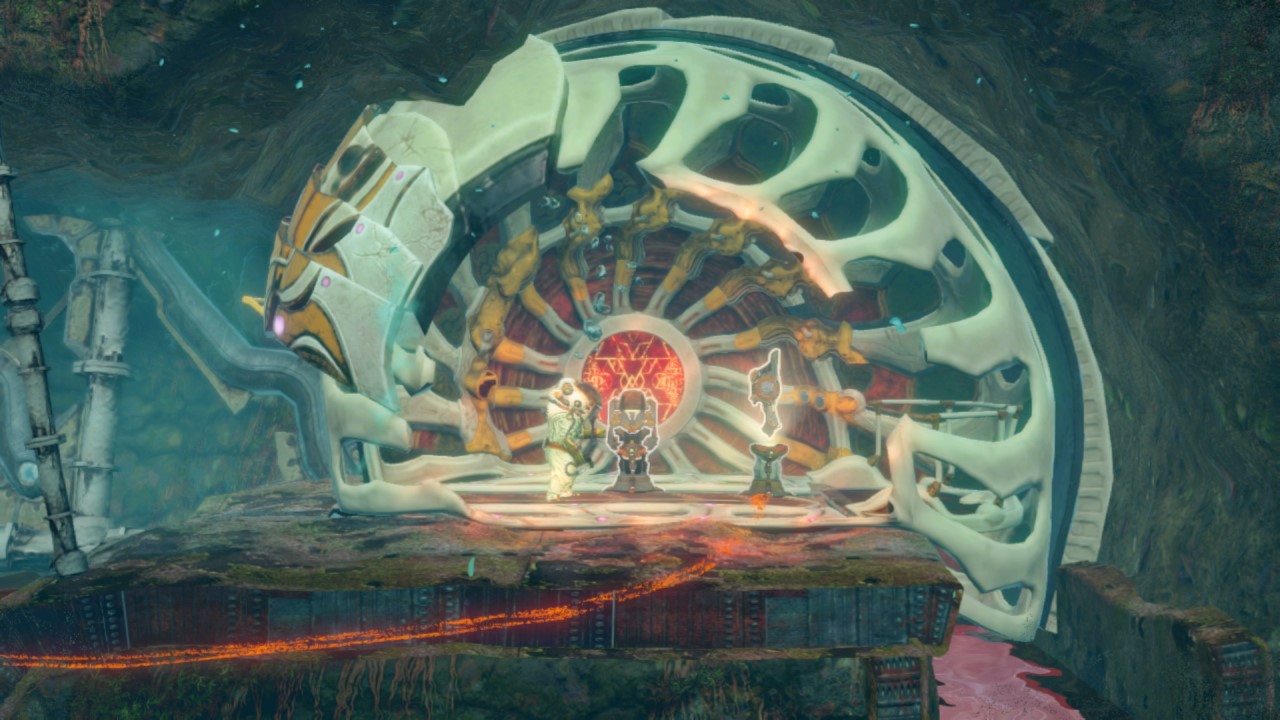 I mean, it certainly tries. There are boss battles and hungry sea critters aplenty, but fighting them isn’t all that fun. You have a melee attack and a growing arsenal of harpoons at your disposal, but the duality of oxygen acting as your health means encounters are something best avoided, unless there is some sort of mineral worth pillaging from the dead.

Yes, Shinsekai Into the Depths has a crafting system. It’s how you increase your carrying capacity for healing items, or learn to jet about without consuming near as much oxygen (did I not mention movement outside of walking and climbing also depletes your oxygen reserves?).  The crafting isn’t novel, but it works well and positively contributes towards Shinsekai’s more survival-oriented design. You’ll need minerals all the time. Ammo, oxygen, repairs, suit upgrades…oh, and the special ore required to upgrade your suit’s pressure resistance.

Recall, if you will, how I likened Shinsekai to Subnautica. My reasoning is simple: both games have you pushing further into the faceless fathoms of the abyss chasing a foreboding secret, all while trying to find a way to avoid getting crushed to death by the immense pressure as you descend. In Shinsekai it’s done via ore you collect that bolsters your diving suit’s tolerance, and not only does the map do a good job funneling you in the right direction, but a handy sonar system highlights the necessary ore nodes on the mini-map. Just pulse the water with your submarine, or wack your melee weapon on the ground to illuminate all the collectibles within a radius around you. It works well and ensures you never lose focus or get too lost.

But the seas are not entirely tranquil in Shinsekai, for the game suffers a few minor swells that rock the boat. For one, performance is a mixed-bag in both docked and handheld. Sure, the game is a mobile port, but that hasn’t stopped the framerate from bouncing about like a skiff in a hurricane. It’s not problematic, and the game never quite dips into unplayable territory, yet it’s noticeable and jarring when it does occur. This is especially true during one of Shinsekai’s lackluster boss fights. 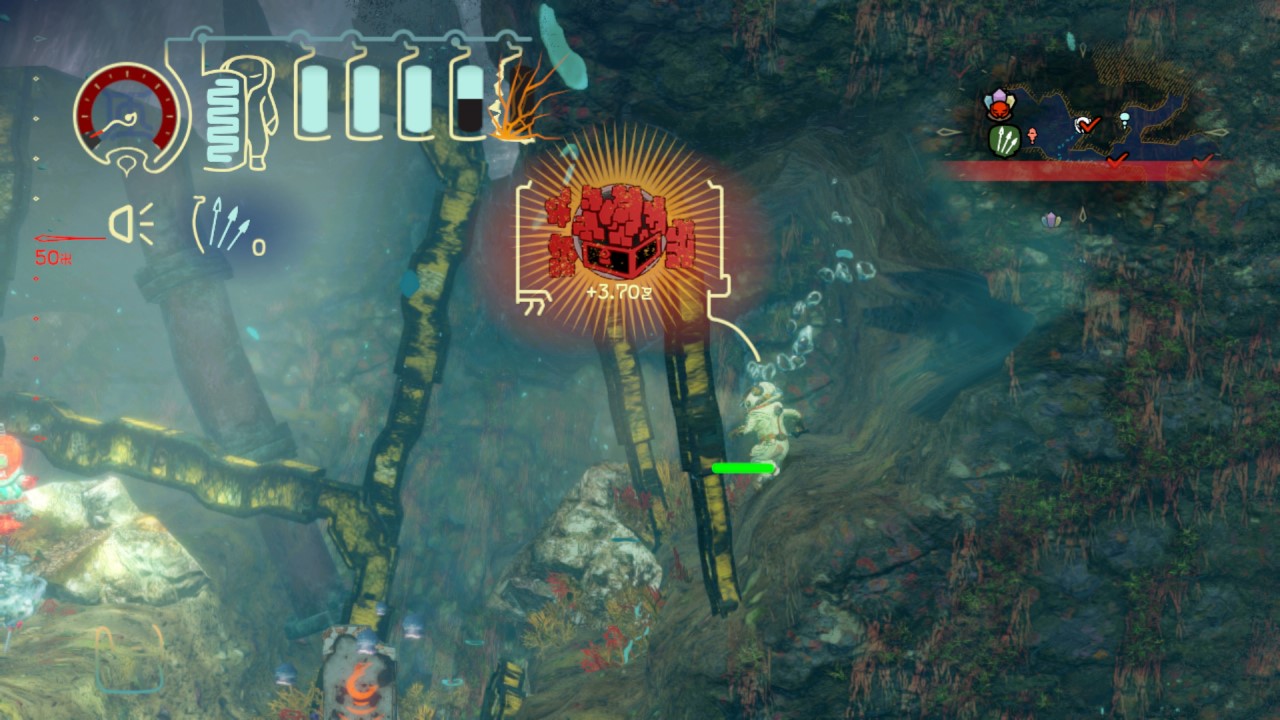 Look, I get it: it’s a Metroidvania so it needs to have boss fights! Problem is…they’re not very good. Most are resource draining slogs where you do your best to not drown, and every hit you take makes that effort exponentially harder. The less oxygen in your reserves the more frantic things become. One of the bosses avoided this “my oxygen is my health, and my health is my oxygen” dilemma entirely, but the monkey’s paw granted us a dull, brain-dead encounter instead. I don’t believe Shinsekai needed boss fights – the game is magical enough thanks to it’s well-balanced take on both exploration and survival that the mediocre combat didn’t need to be brought into the fore even once.

Shinsekai also overstays its welcome, though thankfully not long enough to sour the experience. It’s a seven hour game if you don’t meander about mining every material scattered about the game, and that’s roughly two hours longer than it needed to be. Once you get comfortable with the core loop of upgrading your suit, pushing deeper, then upgrading it again the game stops throwing exciting new ideas at you, and the final handful of levels would have bled together entirely had the fantastic art direction not shouldered the burden. It may go on for longer than it needs, but Shinsekai wraps up right as fatigue sets in, so it’s not the worst mark against what is an otherwise great game.

And that’s what Shinsekai Into the Depths ultimately is: a standout title that feels like a long lost sunken treasure from a forgotten era. It has some pacing issues, wonky combat and some needless bloat in the form of its boss encounters, but these blemishes don’t make it any less magical. In fact, I’m still stunned this game started off as something only available on a phone (blasphemy I say, blasphemy)!

Fans of whimsical, artful indie titles will find much to love about Shinsekai Into the Depths, and ardent Metroidvania purists will get a kick out of its aquatic take on the genre. It’s not going to be everyone’s favorite game for the Nintendo Switch, but I’ll be damned if it doesn’t top at least one person’s list.

Shinsekai Into the Depths