A fine addition to the series that may not be for everyone.

What started out as a simple entry in the 2013 7 Day FPS Game Jam, Superhot has since gone on to become an independent success. The minimalist shooter where time moves only when you move has gone on to spawn a standout VR title, a card game, and now the standalone Superhot: Mind Control Delete. What started out as free expansion to the first game, Mind Control Delete ballooned in scope, and here three years later I’ve had the privilege of playing the final product for myself.

Superhot: Mind Control Delete is not a sequel, but a spinoff of sorts. The narrative from both Superhot and Superhot VR carries over, sure, but how you interact with Mind Control Delete couldn’t be more different in execution. You’ll still punch, shoot, and slice your bright red foes into oblivion, all while avoiding their attacks yourself, yet this time around you’ll be doing so within the framework of a more traditional roguelike.

Superhot’s origins as a participate in the 7 Day FPS Game Jam were belied by its length: while it featured a few hours of entertainment at launch, it banked of replayability over breadth. Superhot: Mind Control Delete is a larger, bolder game than the older sibling it was initially created to expand, though not always for the better.

In Superhot: Mind Control Delete you’ve become one with the system, and the fundamentals remain largely unchanged. Levels are white playing fields filled with black interactable objects that you’ll use to stun and kill an onslaught of red enemies eager to end your life. The visuals are sharper and performance is better in Mind Control Delete than they were in the first Superhot, but the visual language hasn’t changed an iota. This isn’t a complaint: the simple, easy to parse art is part and parcel why Superhot works as well as it does.

The series has always been a bit of a cerebral shooter, as you slowly piece together a plan of action to tackle the opposition, with time trickling by until you make your move. The minimalist art style ensures players are able to focus on the action without being bogged down by too much visual noise. That, and it frankly wouldn’t be Superhot is it looked any different. It’s one of Superhot: Mind Control Deletes strengths, though it unfortunately enhances the fatigue caused by the heavy repetition and randomization found throughout the game.

Unlike the first Superhot or Superhot VR, the majority of levels in Superhot: Mind Control Delete are not scripted affairs. With this release SUPERHOT Team has decided to try something a little new. Rather than work your way through a sequence of curated levels, players instead work through a gird of sorts, where each node possesses a set number of random levels to clear in sequence before opening up the next node in the grid. 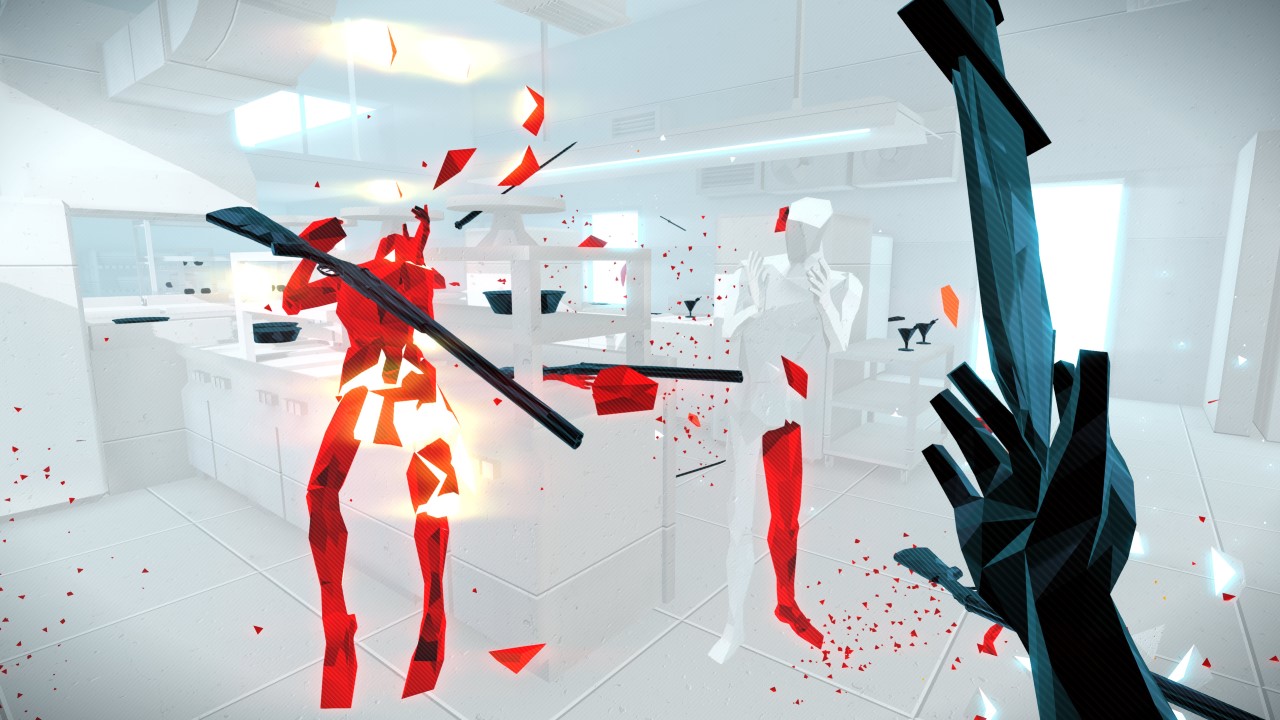 Each of these levels are well designed in isolation – from the your typical bar with a pool table in the center, to a wide open disco featuring deadly vinyls to toss – but the selection you’ll overcome per node is shuffled each time you die. Unlike the first Superhot, Mind Control Delete gives you more than one “life”, largely because you are clearing five to fifteen levels in a single run. There are multiple “classes” (.cores in Superhot parlance) to unlock, but you’ll never have fewer than two lives until a late game .core grants you access to a “Pure” class with a single life.

The first .core you start with is the “tank” class, so to speak, and comes with three lives out of the gate. These are indicated by hearts in the top left of the screen, and whenever you take a hit you’ll lose one. Lose all your hearts/lives and you’ll have to start the gauntlet over, and the levels will be reshuffled. For fans of roguelikes this randomization will likely not bother them, but coming off the original game and Superhot VR I found it could be more frustrating than entertaining.

Part of what made Superhot amazing was knowing I would restart a failed level right at the beginning with the same enemy and item placements, forcing me to master each level through death and repetition. I’m adverse to trotting out a Dark Souls comparison here, but it was this similar “die, learn, repeat” loop that endeared me to the game in the first place. Superhot: Mind Control Delete abandons this principle for a strictly randomized affair.

Every node is filled with a random assortment of levels, and the enemy spawns are constant and follow no discernible pattern. There is some consistency to be found here and there, such as advanced enemies that only spawn on certain nodes (such as the horrifying spiky foes that explode into a shower of bullets upon death), but Mind Control Deletes insistence to alter after every death means defeat sometimes feels cheap. 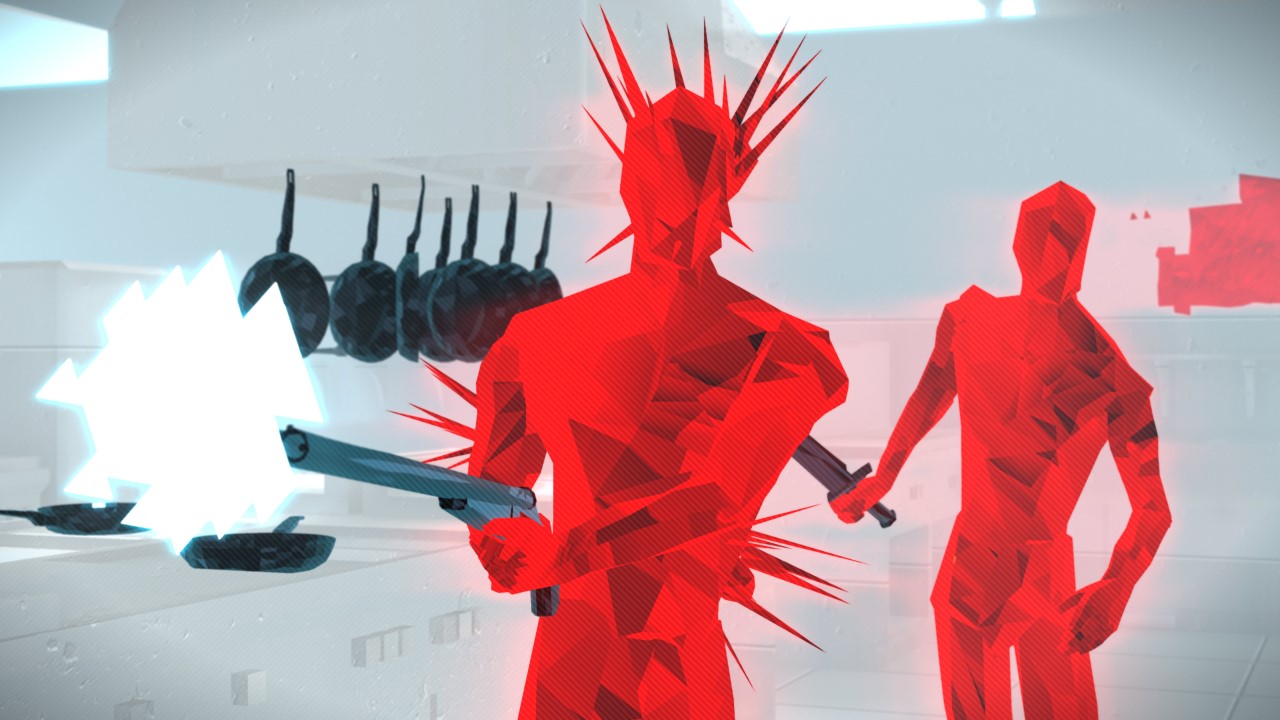 More than a few times I’d spawned into a level near the end of a run only to find myself staring down the barrels of two enemies too far to melee, with nowhere to run and no way to effectively counter. My run would come to an end and I’d be sent back to the start of the node, yet since the levels were a new arrangement I couldn’t take the lessons learned from the previous run into the next one.

Further exacerbating this issue are the new .hacks found throughout the game. On their own these .hacks are simple: abilities that augment or alter how you interact with the game. One .hack would instantly reload my held weapon when I killed an enemy, and another would gift me a katana at the start of every level. When combined they create deliciously deadly builds that alter how you tackle levels, and the game is objectively better for their inclusion. These are not permanent unlocks however, because like any good roguelike they have to be earned in the middle of a run.

Once you’ve unlocked a .hack proper it enters your overall .hack pool, filled with other .hacks you’ve earned and those exclusive to explicit .cores (such as the .hack that allowed me to hold onto an enemy’s weapon after using the HOTSWAP ability on them). While working through a node these .hacks are unlocked between completed levels, though their placement is also randomized. Once you reach one of these .hacks checkpoints you’re given two random ones to choose from. This means you can just as easily end up with a powerful build as a terrible one.

Notice how many damn times I’ve said the word “random” thus far. It’s this belligerent emphasis on randomization that often makes Superhot: Mind Control Delete a pain to progress through. Unlike Superhot and Superhot VR failure doesn’t feel like it comes from poor decision-making alone, because the dice can and very well will roll against you at any time, stalling whatever momentum you’ve built. While repetition is a core theme within the games, the constant shuffling of the deck can make it more tedious than enticing. 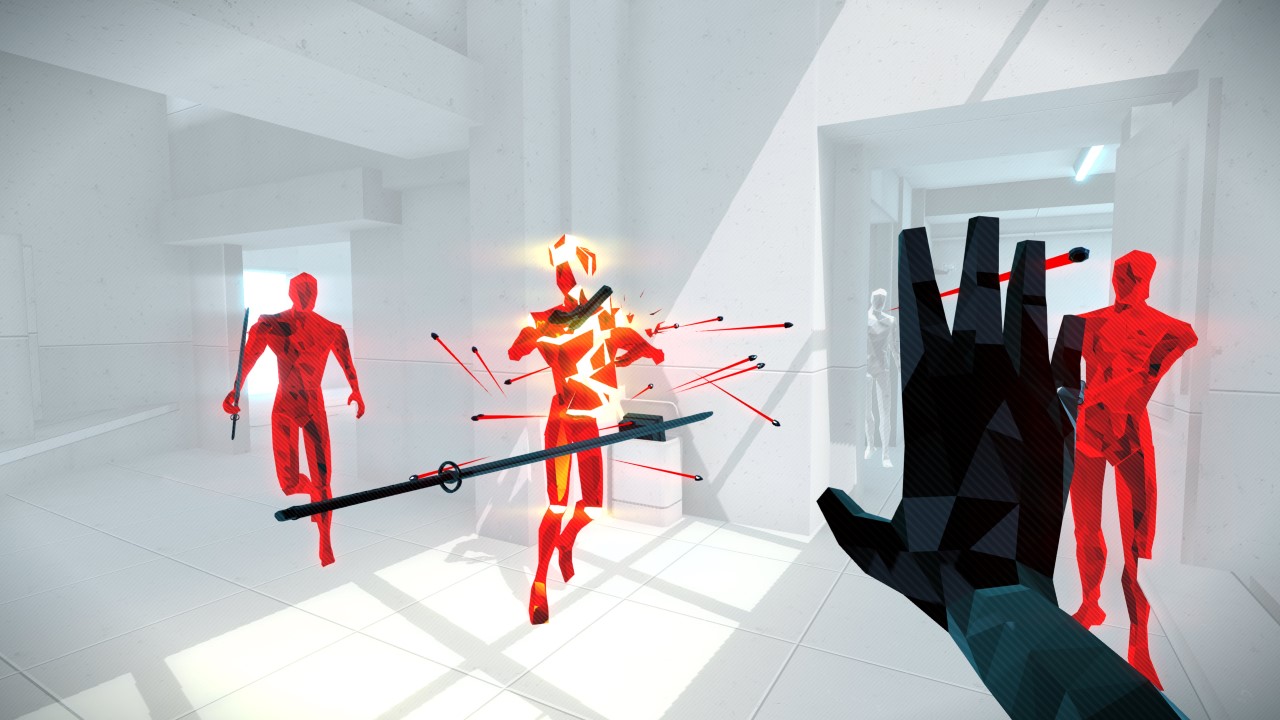 This is all repeated ad nauseam as you work through Mind Control Delete’s grid. The randomization means most nodes bleed together, and it frequently seems like your playing an extended “Endless” mode with checkpoints (that, and there is an actual “Endless” mode you can unlock in the game). The few points where a genuinely new wrinkle is introduced to the fold are welcome at first, but even these quickly wear out their welcome. Instead of feeling like a sequence of ever escalating hurdles, Superhot: Mind Control Delete can be an exercise in banal repetition.

Here’s the rub: I still enjoyed my time with the game. Well, for the most part. Despite my complaints with the structure of the title, the base gameplay remains fantastic. It speaks volumes to the quality of Superhot’s core loop that I still found myself enjoying Mind Control Delete despite the massive divergence in approach. Grabbing a knife and flinging it into some goon’s head, only to rush forward and steal their shotgun, then blow the bastard pursuing me with a katana into a thousand shard-like bits while delicately controlling time with my movement remains as captivating today as it was when Superhot debuted in 2016.

That’s why I’m a torn: as a roguelike Superhot: Mind Control Delete is a great addition to the ranks, even if it relies too much on randomization for my tastes. As a fan of the first two titles I can’t help but be somewhat disappointed and frustrated by the lack of curation. But I have to remind myself SUPERHOT Team is a small cadre of developers, and it took them three years to get this out of the oven. Superhot: Mind Control Delete may not be what I wanted from a follow-up, but that doesn’t make it a bad game.

To extrapolate a little further, fans of Superhot and roguelikes will undoubtedly love Mind Control Delete. It still has the bizarre meta-narrative pulling everything along, the core gameplay loop remains sublime, and despite my qualms the level design, new enemies, additional weapons, and the game altering .hacks and .cores are all excellently designed. Fans eager for more of the same may not click with it in the same fashion as the original, but if they knuckle down and make peace with Superhot: Mind Control Delete’s deviations from the established formula they’ll find a deeply enjoyable game here.

Of course, there is a secret weapon here I have yet to discuss: Superhot: Mind Control Delete will be free to all existing Superhot owners (that’s over two million players). So long as you bought the original before Mind Control Delete’s July 16th release date it won’t cost a dime. Even if you missed out on this offer the game is only $25, and while it’s length is largely padded by the repetition and randomization, that’s not a bad deal. You’ll see the same 30+ levels again, and again, but once you come to terms with that there’s plenty of compelling gameplay to dig into, warts and all. 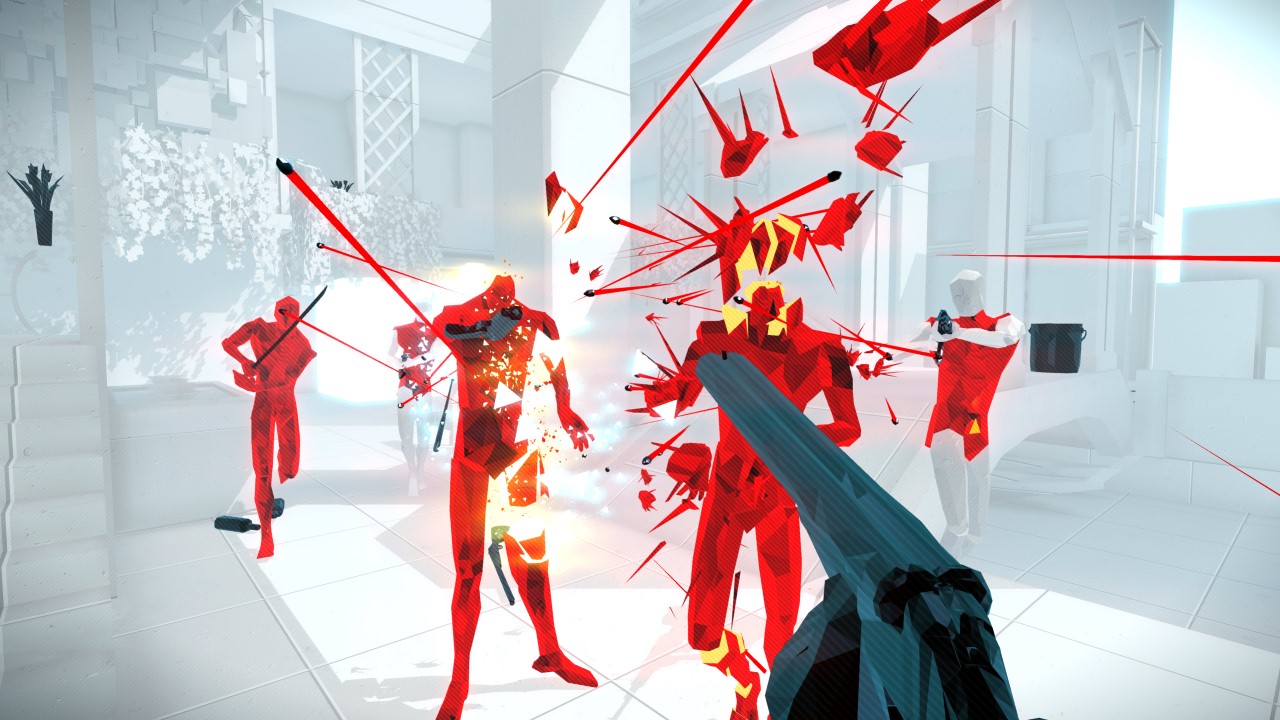 This brings me to what will surely be the most controversial portion of this review. Despite all my gripes listed above Superhot: Mind Control Delete is a good game. Hell, it’s a fantastically fun romp once you’ve accepted it’s not trying to be a direct sequel. SUPERHOT Team opted to try something new with the formula, and for the most part it works. Your mileage will vary depending on what you wanted from the next entry in the series, but Mind Control Delete is able to coast by thanks to its continuously excellent core loop.

If you wanted more of the same then Superhot: Mind Control Delete’s idiosyncrasies will probably frustrate you more than entertain, but if you look beyond them you’ll find a wickedly addicting game beneath. Mind Control Delete may rely too heavily on rolling the dice to extend its playtime, but fans willing to put their qualms aside will discover yet another fine entry in the series. Give up control, and accept it for what it is.