The latest news in the world of video games at Attack of the Fanboy
September 2nd, 2015 by Kyle Hanson 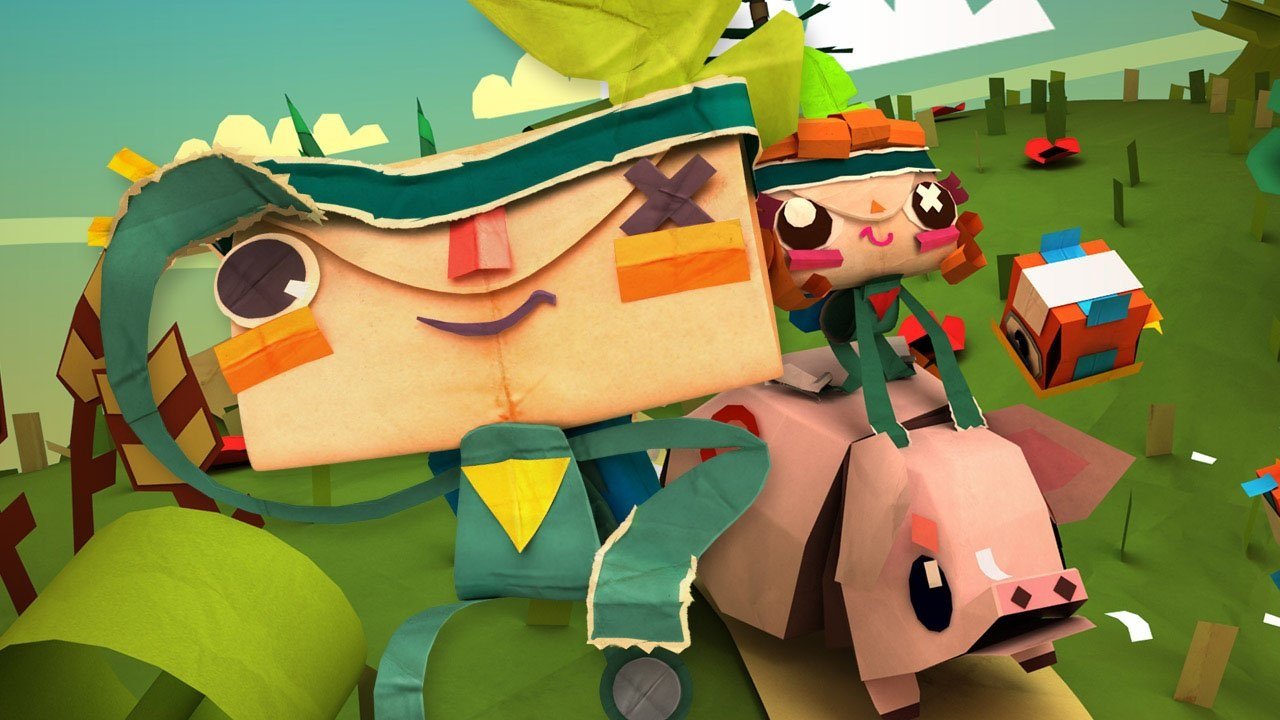 Ever since the launch of LittleBigPlanet in 2008, developer Media Molecule has crafted their own signature style for video games. With the release of the original Tearaway on the PS Vita that style took on new life and a new form. Changing from player-created levels to a more tailored gaming experience, and shifting from yarn to paper, Tearaway crafted a world that was both vibrant and intriguing. Now the game shifts to the PS4 with Tearaway Unfolded, a retelling of the original that brings with it the same charm and whimsy, while altering the gameplay for the bigger, but less feature-rich platform. Two years later, Tearaway can still impress, especially in the visual department, but the experience feels a little bit more lackluster this time around.

Tearaway Unfolded has you play the character of, well, “You”. The game isn’t afraid to break, or even smash through the 4th wall, bringing you into the game in fairly unique and interesting ways. A hole in the sky has opened and evil creatures are pouring through. It’s up to you and your trusty friend to set things right.

The character that you control in the actual game world is named Iota. Much like Media Molecule’s other creation, Sackboy, Iota is a ridiculously cute and lovable character that will easily become a favorite for many. The fact that his entire look is customizable only endears him more to the audience.

That customization is essentially the key feature and gameplay mechanic of Tearaway Unfolded. Choosing from a wide variety of shapes, colors, and objects, you can make Iota and many other things in the game into whatever you want. You start with a decent selection of random shapes and objects that can be used, but the other options have to be unlocked by collecting confetti throughout the game. These are scattered about in the levels, but also hidden behind challenges that can be completed or skipped entirely. 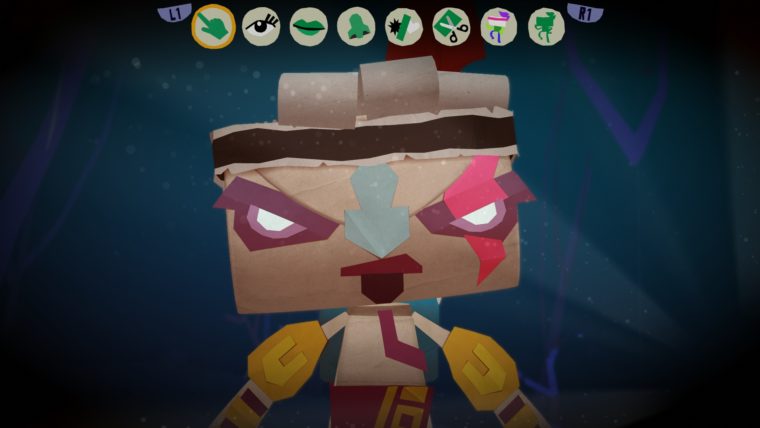 You can also create your own objects via the robust crafting system Using the touch pad on the DualShock 4, players can draw anything they want and put it into the game. These can include butterfly wings, snowflakes, or random symbols for various characters or areas. These things that you craft will then pop up throughout the game in different ways. It’s always fun to spot something you drew showing up in the background of some random area.

Drawing on the DualShock 4’s touch pad can be a bit impractical though. The area to draw is rather small, and while you can reposition things afterward, actually figuring out where to draw objects can be tough. You essentially have to stare at the TV and hope that you do things right, and if you lift your finger at the wrong time, you’ll either have to do a hefty amount of editing or start all over.

The biggest question that still lingers after my many hours with Tearaway Unfolded is, is this mechanic fun? I would enjoy the occasional moment of crafting, as I tried to figure out what to draw for whatever was being asked. And going off-book, perhaps drawing a random image instead of what was being asked, could elicit a chuckle here and there. But overall the drawing simply became tedious later on.

The main issue is that there’s no challenge to it. You are asked to draw something, and no matter what you end up with the other characters will praise it and you get the usual amount of rewards. It has the feeling of “everybody wins” where no matter what you do you are praised and the game pushes you forward. This leads into an issue that has plagued Media Molecule for some time. 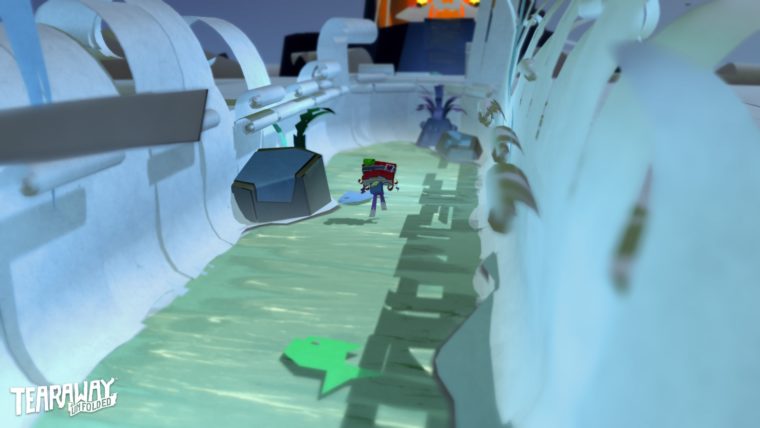 Despite their amazing ability to craft unique worlds and populate them with interesting and fun characters, it has always felt like Media Molecule was just a few steps short of greatness. LittleBigPlanet is thoroughly enjoyable, but it always had a few issues that held it back. The main one being the question of who the audience is. Is Tearaway Unfolded made for adults or children? It sort of tries for an all-ages feel, with some darker humor hidden within the campy and fun world, but the gameplay just doesn’t hold up under modern adult scrutiny.

Taking what was already a fantastically realized world and pushing it to PS4 has truly made Tearaway Unfolded come to life.

Tearaway Unfolded, once you get past the crafting and drawing elements, is essentially a platformer. You control Iota as he runs through various levels, with different environments used to keep things interesting. Tacked onto this are some touch and motion features, such as the light you can summon and direct around the screen by moving the controller, and the wind that you can control with a swipe of the touch pad.

Looking at various sections of the game reveals that you spend a good portion of your time simply walking from one place to the other. The world around you reacts to your presence in various ways, coming to life, or becoming dark and scary. You might run into an enemy or two, but the combat is extremely straight forward and easy for a large amount of the game. The problem here is, if you aren’t as enamored by the amazing looking papercraft world, and don’t find joy in the drawing element, Tearaway Unfolded could feel like a fairly lifeless experience.

However, as stated, that papercraft world does look amazing. Taking what was already a fantastically realized world and pushing it to PS4, with all of its 1080p/60FPS glory, has truly made Tearaway Unfolded come to life. Players will easily find themselves marveling at various sections, as the ingenuity that went into the design of Tearaway Unfolded’s visual palette can easily impress. The way everything is created with paper is just the beginning, it eventually evolves into fascinating design structures about how to make movement work, such as the constantly ripping and curling waves of the ocean, or a waterfall that is always in motion. In visual terms alone Tearaway Unfolded is a marvelous success, and more designers should take note of the way Media Molecule is constructing their games. 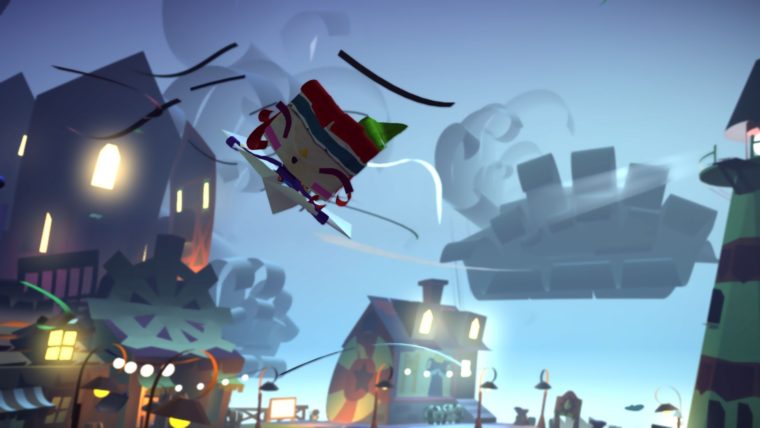 Another great thing about Tearaway Unfolded is the sheer variety of the features that the game uses. While the game itself is rather straight forward, it was first born on the PS Vita, which had a ton of hardware features, such as two touch screens and cameras. The PS4 version had to work around the lack of these things, and did so rather well.

There is a second screen experience you can pull up on your phone via the PlayStation app that allows you to take pictures and draw objects for the game. Unfortunately you can’t use it to draw the items required in the campaign, instead just using it for random things that will appear on screen. The motion control of the DualShock 4 is utilized quite effectively, and if you have a microphone you can use it for a few fun items in the campaign. Overall Tearaway Unfolded is a great way to push your PS4’s lesser used features to their limits.

Tearaway Unfolded takes the enjoyable platformer from the PS Vita and makes it even better on the PS4. It might lose a little bit of its luster in the transition, mostly due to the two year timespan in between, but fans of Media Molecule’s gaming style will find a lot to love here. If you aren’t into the player created part of games though, Tearaway Unfolded might bore you with its reliance on drawings and other crafted items. No one can deny that the game is absolutely gorgeous and full of inventively crafted worlds though.