The Walking Dead: Michonne Episode 2 ‘Give No Shelter’ Review

The latest news in the world of video games at Attack of the Fanboy
March 30th, 2016 by Kyle Hanson 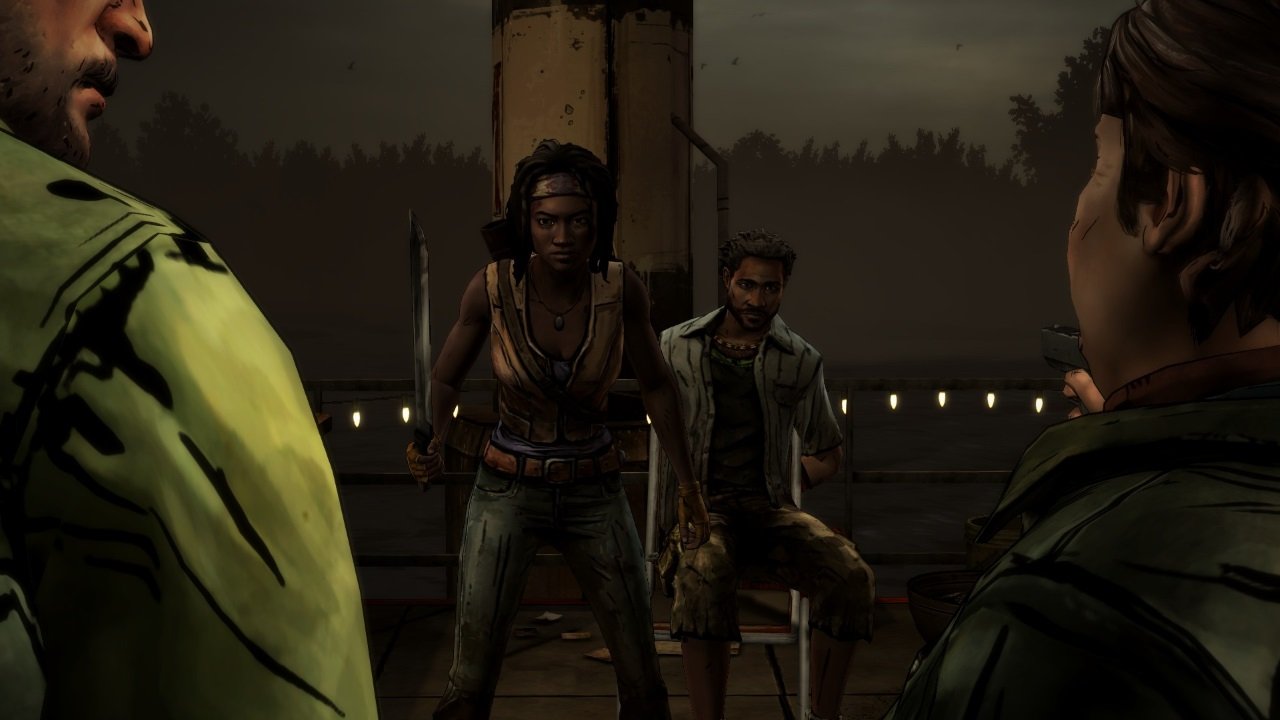 Telltale’s The Walking Dead series propelled the studio to international acclaim, and reshaped the gaming landscape in many ways. With that much success a sequel was inevitable, which came a couple of years later with The Walking Dead Season 2. It largely continued the high quality of the series, while introducing some new concepts of its own. Now we have a new spinoff series, based around the fan favorite character of Michonne from the original comics.

Taking place years after the initial outbreak, and well into the continuity of the comics, the question was, how well would Telltale take advantage of the massive opportunity presented with this spinoff. The answer, based on the first episode, was not very well at all. With The Walking Dead: Michonne Episode 2 ‘Give No Shelter’ there was a chance at redemption, but unfortunately it looks like we’re in for more of the same until this series is over.

The Walking Dead: Michonne Episode 2 ‘Give No Shelter’ picks up immediately after the conclusion of the first chapter. Michonne has been captured by a band of boat dwelling survivors. She has teamed up with another survivor and seeks to free herself and her friend Pete, whose boat she has been living and working on ever since the breakdown that caused her to abandon Rick and his group. As she tries to escape she will have to contend with her past and her personal demons, all while dealing with the murderous Randall and his sister Norma. 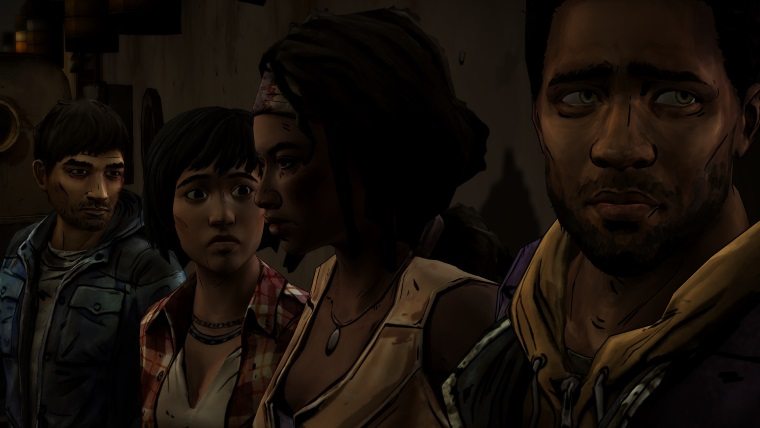 The Walking Dead: Michonne had quite a bit of potential. Comic fans know that this period in time is full of intriguing things going on, as it takes place well after the storyline of the TV show (no spoilers there, things are usually quite different between the two universes). Telltale could have went in a ton of different directions here, showing larger and more experienced communities, or having Michonne’s time on the boat expand an already much larger world than we’ve seen in these games. Instead they focused into a very small story.

This is a story we’ve seen and heard before, within these very games in fact

This also could have worked, as they are trying to explore a very important and much loved character. Diving into Michonne’s past has been something fans have asked for for quite some time. And telling a tale that is directly tied to the comics, rather than an ancillary story as the first two games were, could have been really engaging, even if it didn’t explore wholly new themes or elements of the world.

Instead we have a very rote zombie story, especially by The Walking Dead standards. Michonne is exploring, looking for resources, runs into trouble, gets captured, escapes, and is pursued by her captors seemingly for no reason other than revenge. This is a story we’ve seen and heard before, within these very games in fact, so having it happen all over again is disappointing to say the least. And it hurts that much more given the ripe territory that they find themselves in.

This isn’t the timeline of the first two seasons, it actually takes place far in the future. There is a whole lot going on in this world, and while it is understandable that Telltale wishes to not trample on what the comics have already done, they could have branched off at least a little bit. At the very least, give us a story where Michonne runs into a group that doesn’t immediately reveal themselves to be murderous jerks. 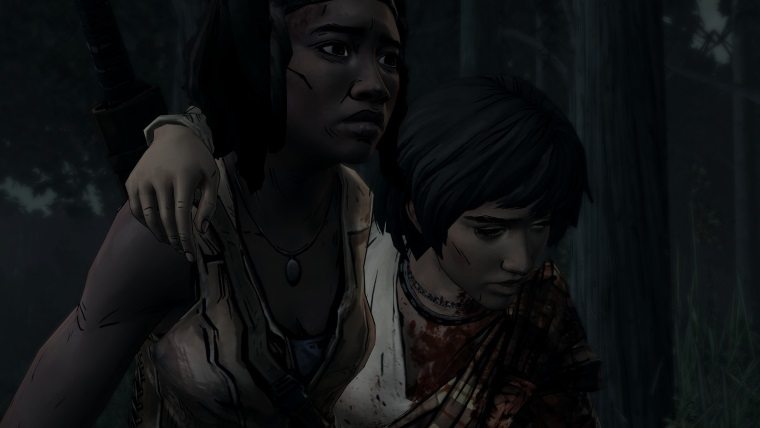 The game seems to hint at more going on underneath the surface, with comments from other characters implying that it’s actually Michonne who is escalating the conflict here. This would have been really interesting and refreshing, watching our hero become what they fear the most, and experiencing the consequences of her actions. It also would have been extra interesting if your choices actually played that big a role, with the player deciding whether to escalate or de-escalate the confrontations. However, after replaying to check, it is apparent that no matter what you do, you are forced down the path of violence that the game seems to be chastising you for.

Even still, some of this could have worked had The Walking Dead: Michonne presented gamers with a compelling villain. However, Randall and Norma are not that in almost any way. Randall is simply an asshole, throwing out insults and hurtful statements even in times where it isn’t appropriate for a villain to do so. Simultaneously, you aren’t really sure that he deserves what you are doing to him, making for a conflict that lacks feelings of either righteousness or true anger.

On top of the story problems come the usual technical issues, which seem to be much more prevalent in this series than any other. The game would actually lock up at times, freezing for over half a second or more. The graphics and presentation have been upped though, possibly being the reason for the increased hiccups. They are quite enjoyable, with button prompts appearing within the world in very fascinating ways. And the gameplay has actually been amped up quite a bit, with sections really feeling great, even within the confines of the graphic adventure genre. 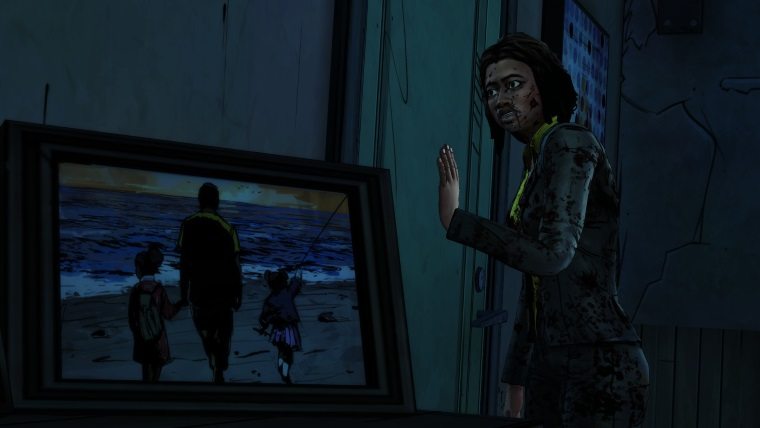 Another redeeming factor is the performance of Michonne by Orange is the New Black’s Samira Wiley. She nails the character about as well as Danai Gurira has on the show, and provides the proper gravitas to the events in the game. It is also great getting to explore this character’s past, as brief and repetitive as those glimpses may be. Controlling someone as smart and capable as Michonne also gives this spinoff a much different feel to the first two season. Fighting zombies feels like an afterthought at times, and other conflicts ramp up the tension significantly.

Unfortunately these moments are all too brief, as is the rest of the episode. The Walking Dead: Michonne Episode 2 ‘Give No Shelter’ might be one of Telltale’s shortest episodes ever, in fact. Clocking in at just over an hour, the episode ended before it really got anything moving. The conflict from the last episode was resolved somewhat, then things calmed for a few minutes, then things kicked back into gear and the credits rolled. Perhaps this is leading to a massive and sweeping finale in the third episode, but for now it feels like players got shafted a bit with this release.

The Walking Dead: Michonne Episode 2 ‘Give No Shelter’ does nothing to redeem the failures of the previous episode while tacking on some additional problems of its own. It is still a Telltale game, so the dialogue is engaging and the performances hold up well, with Samira Wiley’s Michonne being a particular standout. However, at just over 60-70 minutes long, this episode feels like just a sample, rather than an adventure of its own. Without a truly epic finale next month, The Walking Dead: Michonne is in trouble of tarnishing what has become one of gaming’s best series.