The Walking Dead: Michonne Episode 1 ‘In Too Deep’ Review 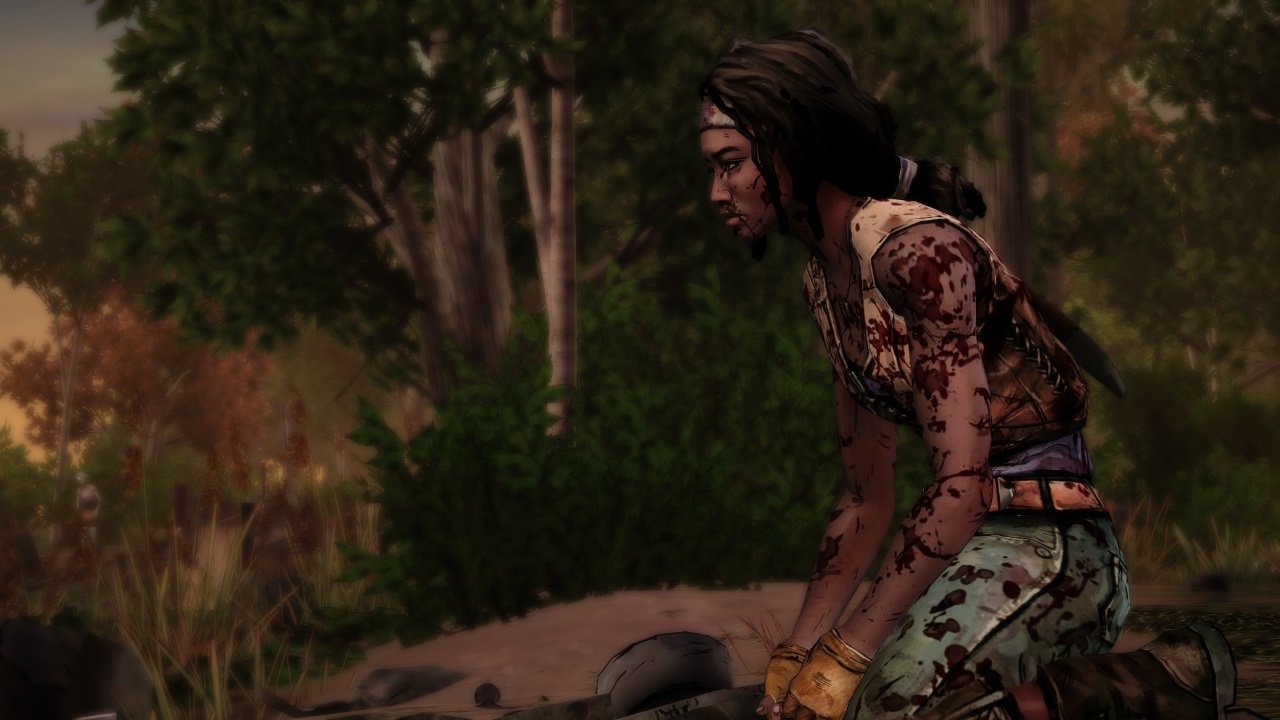 Telltale’s The Walking Dead series has been nothing but endless surprises since it debuted back in 2012. Taking a well-known property and turning it into a digital-only, narrative-heavy release just wasn’t as prevalent back then, but the resulting success propelled Telltale to become one of the most prestigious developers in gaming, while also garnering critical praise and high sales numbers. They went back to the series with The Walking Dead: Season 2, delivering much of the same quality storytelling within the universe that they had cut off from the overarching comics plot line. Now they are diving head first into the comic world that they only dabbled in before, with a three episode mini-series all about one of the most popular characters in the series. Unfortunately, while the promise of greatness is certainly there, this first episode does nothing but wander aimlessly, and create the feeling that Telltale might be out of their depth this time around.

The Walking Dead: Michonne Episode 1 “In Too Deep” picks up at a time within the comic continuity where Michonne is out on her own. I won’t go into too many details, in case you haven’t read the comics, but for a period of about a year’s worth of releases (which translates to an unknown stretch of time in the actual story) no one knew what was going on with her character, she was totally M.I.A.. Telltale has taken this period of time and inserted their own story into it, giving us a proper understanding of what Michonne went through during this tumultuous time. At the beginning of the episode, Michonne is at her lowest point in possibly her entire life. Alone and afraid, she ends up in truly dire straits, only to be rescued at the last second and given new purpose. Joining up with her rescuer, she is still haunted by her extremely dark past, but finds a new life on a boat amidst the zombie apocalypse. 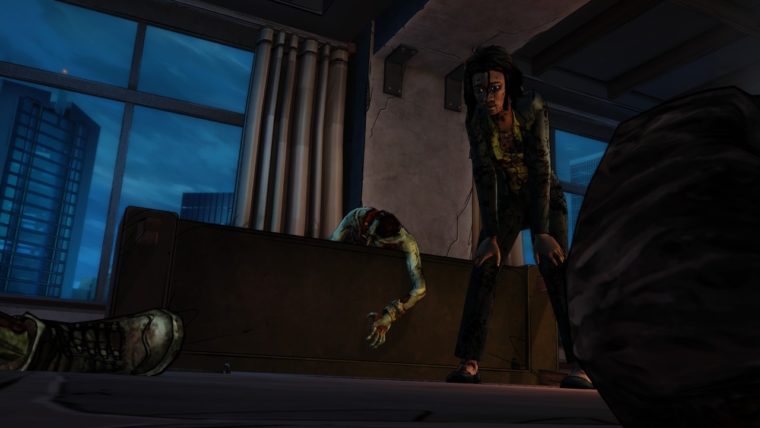 Telltale’s latest games have been a bit more of a mixed bag than usual. Tales from the Borderlands was arguably their best work, but Game of Thrones was on the other side of the spectrum, and Minecraft has waffled in between the two extremes. The Walking Dead has always been a series that delivered though, so there were high hopes for this miniseries spinoff. With just this first episode though many of those hopes are in doubt, as it shows a story with little innovation, and a game engine that continues to struggle against the tide of time.

The game engine problem isn’t all that surprising, as Telltale has continued to push the same technology for the last fours years or more. They’ve done an admirable job in The Walking Dead: Michonne to get it updated, adding some nice graphical touches and overall stability. But the animation is still stiff and janky, and glitches do still pop up. This might be Telltale’s best looking game so far, but it’s still a far cry from where the developer should be after all these years.

Going back to the story, with only three episodes in this miniseries one might assume that each would be jam-packed with content. This one had the unenviable job of setting up the overall conflict, while introducing players to the game’s take on Michonne. The latter is done very well, giving us a protagonist that many will become attached to right away. The voice acting overall is very well done, but Michonne, voiced by Orange is the New Black’s Samira Wiley, pulls off a stellar performance, without stepping on what Danai Gurira has done with the character on TV. 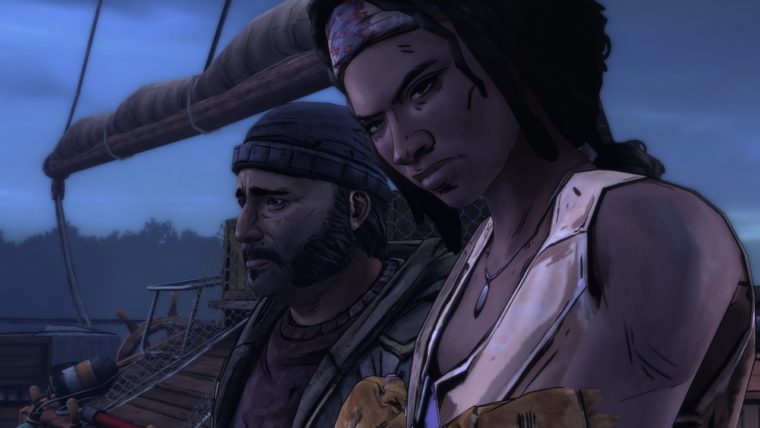 Unfortunately the story doesn’t really do justice to the character, at least so far. Everything here feels simultaneously rushed, and threadbare, with the 90-120 minute affair introducing a lot of characters and a somewhat intriguing conflict, but delivering on none of it, while pushing through the usual tropes for the series. You can almost guess at everything that’s going to happen before it actually does, as it fits so perfectly within the narrative shape formed by previous The Walking Dead entries. Of course, there’s only so much you can do within the framework of the zombie apocalypse, without going to extremes that is, but there needs to be something unique, besides diving into the past of a much beloved character, to justify this separate adventure.

Unfortunately the story doesn’t really do justice to the character

The most frustrating thing is that there seems to be something there, underneath the poorly paced story that is in this episode. There are definite hints of something deeper going on under the cliche surface, and if The Walking Dead: Michonne Episode 2 can deliver on them then it will make this a better episode in retrospect. However, nothing at the end of the episode, nor what was shown in the brief “next time on…” teaser is pointing toward this, so expectations should be somewhat lowered.

It is also frustrating that the character of Michonne is done so well, but everything around her seems so hacked together. There are some truly dark moments in just this one episode, and they are well earned with what we are being shown about Michonne and her past. Likewise, having a more capable protagonist, one who has survived years of the zombie apocalypse and knows what to do, and how to do it, is refreshing and enjoyable. Disappointingly the story doesn’t push this more, instead opting for the usual tropes that we’ve seen in this series already. 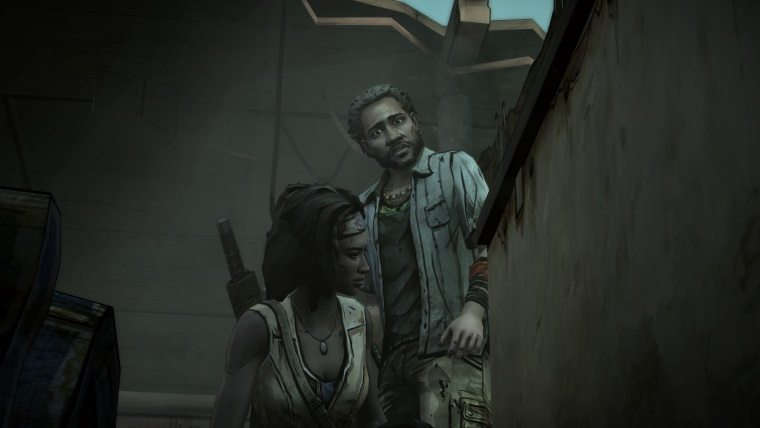 It’s not all bad though, along with the already mentioned excellent voice acting, the overall writing of dialogue and characterization works well. You get the sense that these are real people having real conversations, and some of your choices seem to have weight to them, though the end result isn’t that impactful given how rushed the preceding events were. Telltale still shows its talent in manufacturing interesting scenarios and events, and the gameplay in those events is actually pretty fun this time, with enhancements to your controls and the way the action plays out. It’s just regrettable that you feel less attachment and investment in what is going on due to the story and pacing issues.

The Walking Dead: Michonne Episode 1 “In Too Deep” gets the series off on a very rocky start. There are story and pacing issues throughout, and the overall feeling of the episode is that it setup the next two entries, without delivering on anything of its own. It is somewhat saved by the usual quality writing and a great performance by Samira Wiley. There are also hints that the story has something more planned, something deeper and more interesting than the usual good guy vs. bad guy setup. We’ll have to wait for Episode 2 to see if any of it pays off, but for now the series isn’t living up to its predecessors.