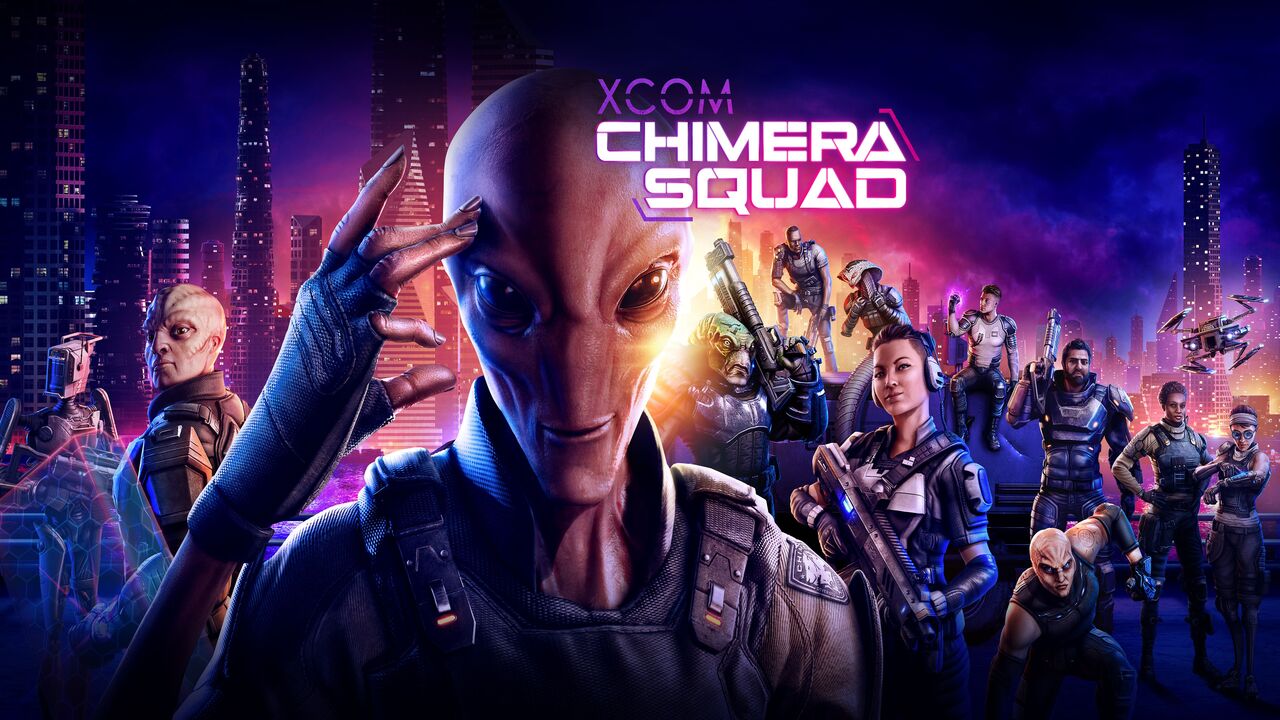 The heart of any strategy game is its characters. While not every strategy game attempts to flesh out its characters and world as much as something like last year’s Fire Emblem: Three Houses, even the faceless pawns in a game like Civilization live out their own unique stories over the course of a campaign, with each new ability and scar becoming a memento of a hard-fought victory. The modern XCOM games provide an excellent middle ground between fleshed-out characters and generic troops, providing you with an endless pool of random soldiers that you can then project a personality onto, whether that be your friends, your coworkers, or your favorite celebrities. It’s one of the primary reasons strategy fans are drawn to XCOM (other than it being a best in class strategy series), and when XCOM: Chimera Squad was revealed to be ditching custom characters entirely in favor of a predetermined cast, many fans were skeptical, myself included. That’s just the first on a long list of changes to the traditional XCOM formula made in Chimera Squad, but thankfully, these modifications come together to create a fresh, albeit safe, XCOM spinoff that is sure to satisfy longtime fans of the series.

XCOM: Chimera Squad doesn’t replace XCOM 2. The excellent 2016 sequel and its meaty expansion will still be the bread and butter of hardcore XCOM players, mostly due to their wealth of content and the enormous back catalog of community-created mods, but Chimera Squad doesn’t set out to be XCOM 3. Instead, it’s a fun diversion that serves as a sidegrade rather than a fully-fledged sequel. It looks like XCOM 2 and it plays like XCOM 2, but it’s the little things that give Chimera Squad its own unique identity that sets it apart from its grim predecessors. XCOM: Chimera Squad takes place five years after the events of XCOM 2, but you don’t really have to know any plot details from the previous games to understand what’s going on here. Rather than a large scale global alien conflict, Chimera Squad focuses solely on the criminal activities and shadowy organizations located in City 31, a model city that serves as a test bench for harmonious life between humans and aliens. However, not everyone is in favor of peaceful coexistence. Several unsavory characters are working behind the scenes to sow the seeds of chaos in City 31, and the elite Chimera Squad is brought in to destroy these underground threats. Despite the serious circumstances, what follows feels less like a dire last stand against an alien threat and more like a Saturday morning cartoon, and XCOM: Chimera Squad leans into that hard.

The game’s presentation and tone are easily the most noticeable changes. Bright, saturated colors replace the moody blue hues of Enemy Unknown and XCOM 2. Cutscenes and story sequences appear as if they’re lifted directly from the pages of a comic book. The agents of Chimera Squad banter with one another and crack jokes both at HQ and out in the field. This is a much more lighthearted game than the ones that came before it, and it offers a different perspective on a world we’ve only seen through the lens of war and resistance until this point. It’s a welcome change, and it really makes Chimera Squad feel like a new direction for the series. I wouldn’t be opposed to getting more of these fun, mostly inconsequential spinoffs in between tentpole XCOM releases in the future. The changes in aesthetic and tone don’t affect the core gameplay in any major way, but the game’s larger emphasis on story provides an extra layer of context that fleshes out the game’s world in some pretty interesting ways. The little touches, like hearing multi-species food advertisements on the radio or listening to different Chimera Squad agents discuss their involvement in the initial invasion, do a lot to make you care for City 31 and its inhabitants. The smaller scale also applies to XCOM: Chimera Squad’s mission structure. Missions are typically only comprised of one to three encounters that take place within the same building. Some missions take place entirely within one room, like a hostage situation in a convenience store for example, while others might see Chimera Squad working their way through an office complex to secure a VIP. It feels like a classic Rainbow Six game at times because of its emphasis on efficiently clearing rooms one at a time. Each encounter in a mission is separated by a new mechanic called breach mode, which allows you to choose the entrance each agent uses to enter a room and enables you to get preemptive shots off before the round starts. You won’t be able to clear an entire room of enemies during a breach, but taking out key foes can give Chimera Squad the upper hand in an encounter. Breaching never gets old throughout the campaign thanks to its awesome slow-motion camera, and deciding which combatants to prioritize during a breach feels like a natural extension of XCOM’s tactical decision making.

Claustrophobic encounters and breaching aren’t the only shakeups to the formula that Chimera Squad brings to the table. The customizable soldiers from past XCOM games are gone entirely, replaced by 11 predetermined agents, each with their own backstories and abilities. Designing your own squad is usually just as important to XCOM as the aliens, but Chimera Squad’s gambit of axing the feature pays off. Each of the Chimera Squad agents that you can recruit throughout the campaign is powerful and interesting, although some are clearly a bit more useful than the others in the beginning. Terminal, for example, can heal allies with a drone and even give allies an immediate action using one of her abilities. When planning for a mission, I almost always brought Terminal with me instead of someone like the melee-focused Zephyr. After being forced to use Zephyr for a few missions while Terminal was occupied elsewhere, however, she gained new abilities that made her a much more viable option for certain encounters. Even the weakest links of Chimera Squad can potentially grow into immensely powerful units with the right training, and by the end of my campaign, each of my units served very specific purposes. Also, the many agents of Chimera Squad play off of each other’s strengths, and squad synergy can allow for some rather inventive strategies. Tons of abilities modify turn orders in some fashion, and there’s even a universal “Team Up” ability that moves an ally up to the next turn for an immediate follow-up action. XCOM: Chimera Squad takes team play to the next level, and your team feels more like a squad than ever before. If you’re familiar with XCOM, only having 11 characters to pull from might not seem like a lot considering that the series typically features permanent character death, but Chimera Squad does away with this mechanic entirely. If a Chimera Squad agent runs out of health, they go down for three turns and must be stabilized before they bleed out and die. If an agent dies during a mission, it’s game over. You’ll have to either restart the encounter or load a save. Stabilized agents survive but remain unconscious, so they aren’t usable for the rest of the mission. To ensure you aren’t outnumbered, you can manufacture androids that serve as generic backup units in the case of someone going down in a firefight. The removal of permadeath makes XCOM: Chimera Squad less punishing than its predecessors, but that doesn’t make it any less difficult. Nobody can die, so you aren’t punished for mistakes as heavily, but because no one can die, every mission is designed around you having a full squad of high-level units, meaning you’ll be faced with a difficulty curve that ramps up steadily throughout the campaign.

The removal of permadeath also allows you to get attached to each of the Chimera Squad agents without worry, which is a godsend considering how great the dynamic between most of them is. Each character has their own backstory, and certain characters might comment on things that are happening if you take them on the right missions. Most of the conversations happen at HQ though, and that’s where you’ll get to know your squad the best. Some characters are shallow and are primarily there for comic relief, but other agents have genuinely interesting stories to tell that will make you want to wait and listen before selecting your next objective. Verge, a sectoid who served in the initial invasion of Earth, steals the show in particular, and his expressions of guilt and remorse for the things he did in the past shine a new light on the countless aliens we killed in Enemy Unknown and XCOM 2. I wasn’t expecting to be drawn into the story of an XCOM game (and don’t expect Chimera Squad to blow you away in any regard), but I was surprised at the number of times I felt compelled to listen to my squad open up to one another. While Chimera Squad only takes about 25 hours to complete, it’s designed with replayability in mind. It features a branching campaign with three major factions that can be tackled in any order you choose. The organization you choose to tackle first will be weak and ill-equipped, perfect for your fledgling Chimera Squad agents. The second and third, however, will be armed with more powerful weapons, more resistant armor, and more diverse enemy types. I saved Gray Phoenix for last in my initial campaign, and they were a force to be reckoned with during the final hours of that playthrough. Starting with them on my second campaign was much more manageable. The branching campaign adds a significant replayability factor to Chimera Squad, and that’s not even mentioning the mod support. Just like with XCOM 2, modders will be able to add on to Chimera Squad with their own creations, and if XCOM 2’s modding scene is anything to go by, there will be some pretty awesome things down the road.

Unfortunately, XCOM: Chimera Squad suffers from technical issues and a general lack of polish that took me out of the experience on multiple occasions. The game has a crashing problem that usually rears its head when returning to HQ from a mission, and I counted five crashes throughout my first campaign. Other than that, there aren’t any completely game-breaking issues, but there are a lot of minor annoyances that happen frequently enough to warrant a complaint. Sometimes, the roof of the building my characters were in would become opaque, obscuring the battle below. Other times, reinforcements would teleport to their cover locations, negating my soldiers’ overwatch setups. Another time, the enemies refused to take their turn and I had to reload a save. Characters frequently do not face the way they shoot. I wouldn’t call Chimera Squad incredibly buggy, but it definitely could have used just a bit more polish.

Despite Chimera Squad’s innovations, it still largely feels like just another XCOM game. It doesn’t evolve the formula in any major way, and it feels like XCOM 2 with a fresh coat of paint at times. XCOM: Chimera Squad should be viewed as a standalone expansion to XCOM 2 rather than a full-on sequel. That being said, the foundation is still as solid as ever, and the new additions and tweaks offer enough novelty to make Chimera Squad at least worth seeing through to the end. There isn’t much reason to stick with it considering XCOM 2 and War of the Chosen still exist, but it’s an interesting enough diversion that provides a more focused experience and provides more insight into the world of XCOM.