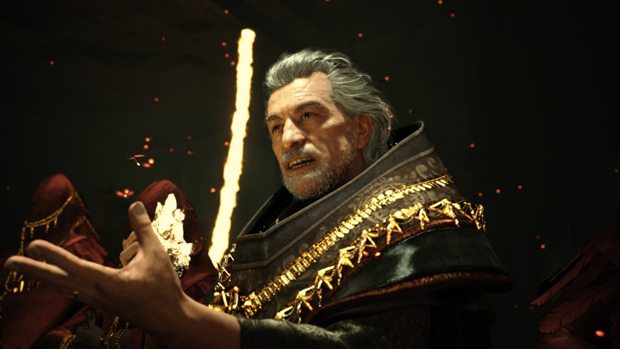 Square Enix had a lot of interesting games at their massive booth for E3 2012. We got a closer look at Tomb Raider, hands on experiences with Hitman: Absolution and Sleeping Dogs. Though midway through the expo, Square unveiled its next generation game engine: “Luminous Studio”.

It gave us a lengthy glimpse at what’s going to be possible when the next generation arrives, and it made their current-gen offerings look, well, paltry in comparison. The demo video below was produced entirely in the Luminous Studio, Square Enix’s game production engine for crafting “next generation quality games”.

The Luminious Studio is currently in development internally at Square Enix.

“Thanks to the Luminous Studio engine, the demo video can depict high quality “real time computer graphics” at the same level as pre-rendered computer graphics. The fine details of the characters, who express life-like humanity, are showcased through their rich facial expressions, subtleties of their pupils and hair, and their brilliantly flowing garments. The characters along with the vibrant monsters, transport the viewer into the world created by the Luminous Studio engine.”

Square wasn’t the only developer to show off a next generation game engine at E3 2012. Epic Games and Crytek were both present with their new wares, and Star Wars 1313 showcased some probable next-gen material as well. Though rooting this next-gen gameplay demo in the world of the Final Fantasy series got fans excited at the possibilities of the franchise when it’s time for the next generation to finally arrive.

About the Luminous Studio and Game Engine

The LUMINOUS STUDIO game engine aims to bring about greater productivity within game production teams, while simultaneously offering an environment to create games of fantastic quality. Furthermore, the LUMINOUS STUDIO game engine is planned to support game consoles, PC, smartphones, and the web, encapsulating the many platforms of the next generation of quality.
AGNI’S PHILOSOPHY showcases the level of quality that Square Enix is aiming for in next generation games.

A game engine is a development environment constructed of varied tools and libraries needed for game creation. Many elements are needed for game software creation: graphic technologies and physics calculations, artificial intelligence, motion, and sound technologies. In an engine, these elements are bound together with the intent of improving game development efficiency and quality.
The Square Enix Group has several engines in addition to LUMINOUS STUDIO, such as IO Interactive’s “Glacier 2” and Crystal Dynamics’ “Crystal Engine.”