Blightbound On Steam is Almost an Unplayable Mess

Maybe hold off until you read this. 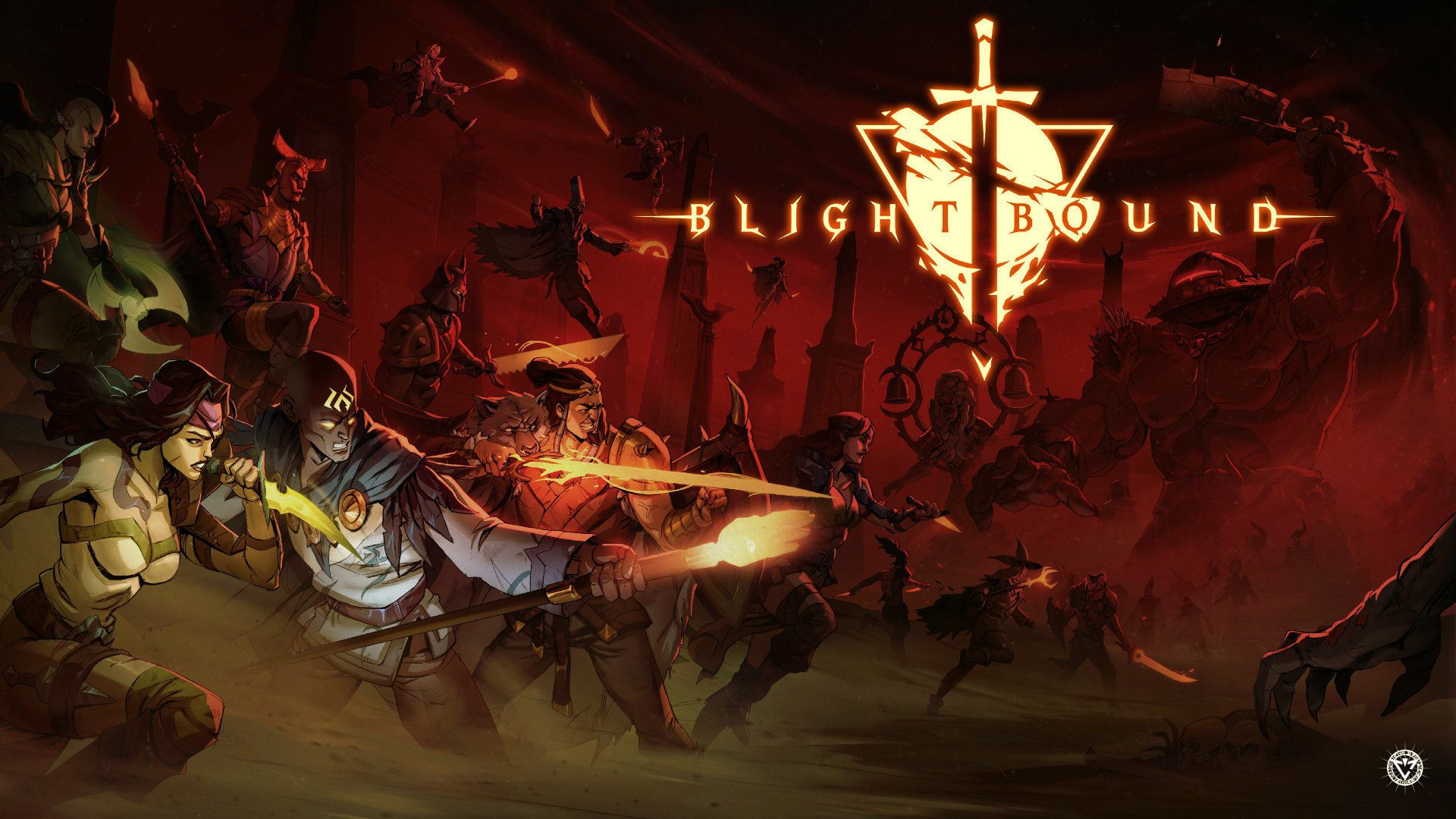 Blightbound is the latest game from developer Ronimo Games and published by Devolver Digital. Ronimo Games previously developed the well-received Swords and Soldiers as well as the MOBA-ish Awesomenauts. Blightbound is a sidescrolling multi-plane beat-em-up with RPG elements and a focus on online co-op gameplay. At the time of this writing, the game stands at a decisively mixed rating on Steam and it’s for good reason. For all of its positives, the game is immediately undermined by its many, many bugs. Attack of the Fanboy received a copy of the game and I was tasked with writing up some articles to showcase it. However, after trying my hardest, here I am on August 4th giving up. Not because I refuse to cover it mind you but because I literally can’t play it as it’s meant to be played.

To begin, allow me to provide a baseline of what Blightbound is supposed to be when everything is working right. Blightbound is a co-op-centric game that puts players into the role of an assassin, warrior, or mage as they embark on epic three-player dungeons to progress through the story, level up, and earn epic loot as well as prestige. Prestige can be spent to upgrade the refuge, a hub world unlocked after the opening section of the game and unlocks perk such as extra experience, stat points, etc. In the refuge, you can also swap between the three classes if you’d like to try something new as well as queue up for online matchmaking or play with bots if you’re lacking online compatriots. The world itself is a medium-high fantasy setting with a very dark aesthetic and the gameplay itself is decent. That said, that’s only if it works.

As of August 2021, and seen in many of the negative reviews on Steam, the tutorial has caused many mid to high-end gaming machines to crash for no reason whatsoever. On July 29th, one steam user, Exire, relayed, “I can’t get through the tutorial because the game keeps crashing. This is happening to many others as well. These issues persist despite using a high performance PC with an Nvidia RTX 3080. Disappointing.” My experience was unfortunately very similar. 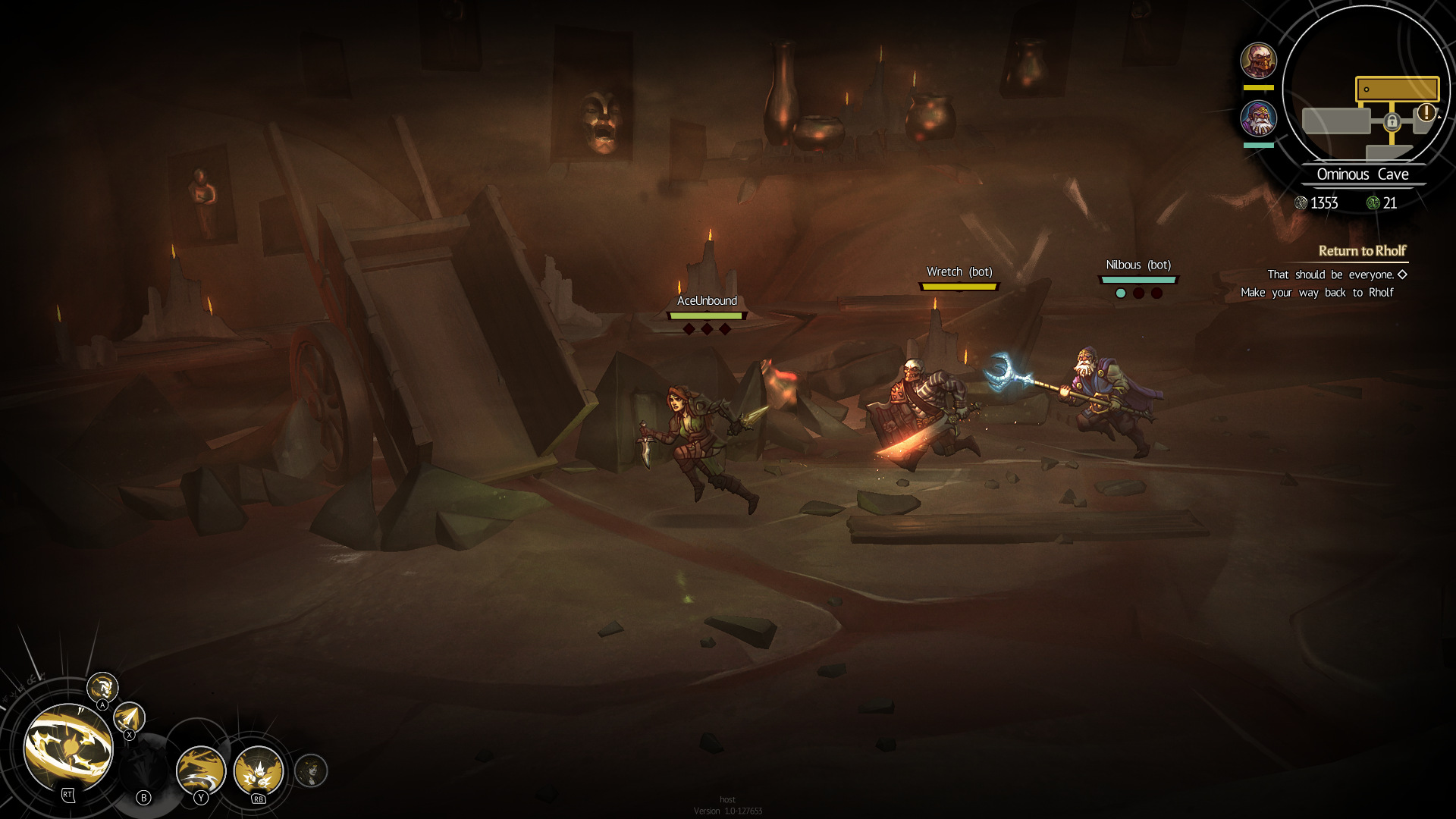 During my time with Blightbound, within the first fifteen minutes of booting it up, the game crashed a total of four times before I was forced to give up on the tutorial. That may seem like a small gripe but if a game recommends a tutorial, it usually means there are some nuances to learn here that will not be present in the main game. This was certainly the case as each class has its own passives, active abilities, and even an ultimate (similar to hero shooters or MOBAs) so getting to know at least the basics before playing with others would have been great. What’s odd though is how it crashed. When walking through the tutorial, it seemed to happen at different random spots. I convinced myself it was occurring because I was walking to a specific spot in the map after it crashed two times so on the third attempt, I went the other way instead to see what would occur and it let me play for another five minutes before crashing yet again. My fourth attempt was the quickest of all as I loaded up the tutorial, walked forward two steps, and was met with my Tales of Arise windows desktop background. Nice. So I skipped the tutorial but the main game had just as many issues.

As mentioned before, Blightbound is intended to be played with people. As such, the game cannot be played without some sort of matchmaking being done. Players can queue up to join two other would-be warriors online or bots to quickly get in and play. As I was originally planning to cover this for AOTF and share my full experience, I attempted to play online, and, well, it wasn’t successful.

During my first queue and after everyone confirmed the level, one player backed out ending it prematurely. I was surprised to find the other player still in my party as I queued up again and after a few moments, we were loaded in and ready for adventure! My new online friend and I had a bit of fun smashing enemies while the Mage Bot we brought along made us look like total n00bs. As the assassin of the group, I loved being able to backstab enemies as the stranger I queued with, a warrior, soaked up the damage. To its credit, this was a great deal of fun and I was excited to see more. However, this was cut short as we hit one of the doors required to move forward and received a warning that a party member was still in combat even although all three of us were standing conflict-free in the doorway. 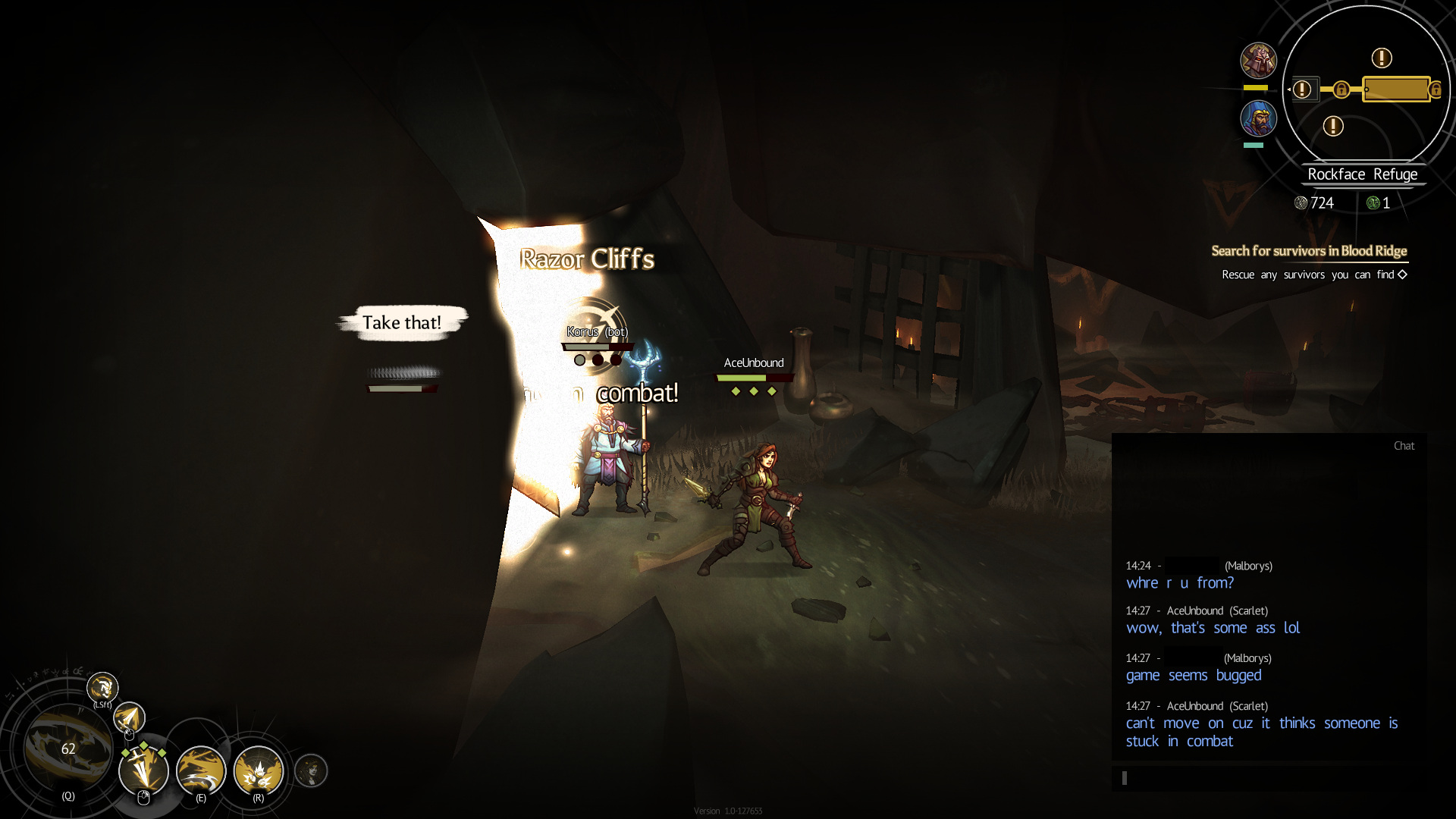 Dungeons are laid out in Blightbound similar to an old school beat’em up. Players will enter a room, defeat all of the enemies inside, then move through the flashing door to the left or right of the screen to continue forward. So this specific door not opening for our party was effectively a roadblock in our online adventure. Noticeably confused, the online stranger and I ran back and forth a few times looking for enemies or anything that would indicate to the game that we were in combat. I could have sworn I saw the mage bot shrug his shoulders after our fourth or fifth trip through the level before we all gave up. Without any way to progress forward and no magic “stuck” commands, we abandoned the match and that was the only online game I tried out.

I did play with bots which worked far better but as the game is intended for “teaming up” with online players, this was yet another glitched-out feather to add in its hat. The progress I made with my party of bots however was also hampered by crashes in many parts of the game or enemies falling through the floor making them unkillable for our ragtag team. After days of fighting my way through the bugs, to make matters worse, I launched the game today in hopes of putting in a nice long session (with some meditation tracks playing in the background), and guess what, I and others literally can’t get back in due to the game being unable to connect to the game’s servers. Apparently, this is an issue that started back in the .5 version of the game that has re-emerged and is tied to an online connection being required to track and verify player progress. So with the game unable to communicate and my patience finally run out, I’m here writing an article to warn would-be adopters of what they may encounter. Caveat emptor and all that jazz. That said, these major bugs shouldn’t spell the end of the game’s life on Steam.

Time To Get To Patching 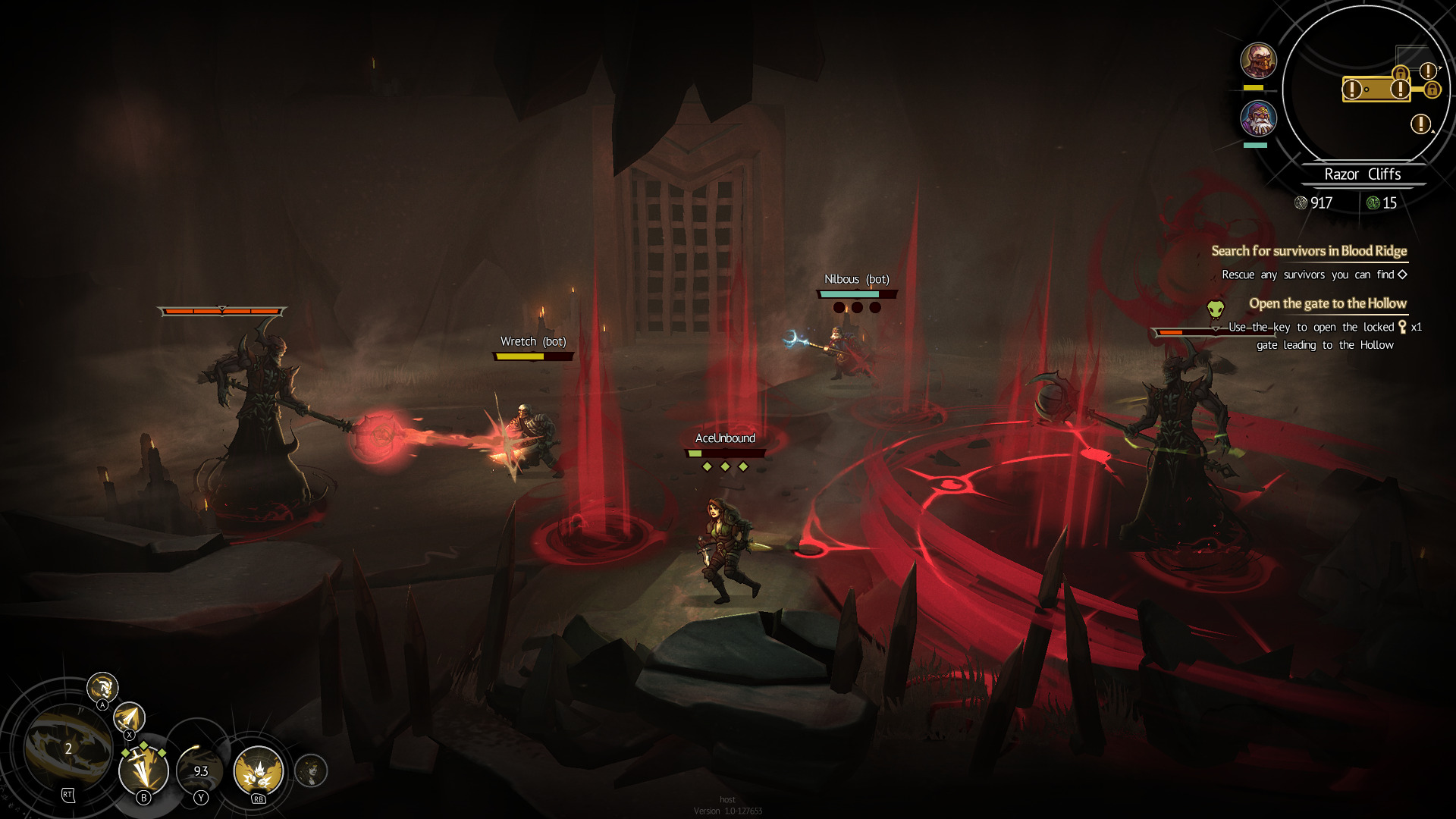 Blightbound is an ambitious game for an indie studio. Even after twelve months in early access building it up, having an online-centric title completely free from bugs is near impossible. Luckily in the current day and age, studios can continuously patch a game to make it better and eventually become playable. I’m uncertain how much was invested so far into this title but with a bit of elbow grease to at least get the game to a stable point where everyone can try it out, the team at Ronimo can turn to content and really making their vision come to life. Personally, that should have been done before claiming the game is ready for a full release but I digress. I may revisit Blightbound in a few months but as it stands today, I can’t in good conscience recommend anyone pick up this game on Steam.

Blightbound is available now on PC, PS4, and Xbox One.