The latest news in the world of video games at Attack of the Fanboy
June 13th, 2017 by Jelani James 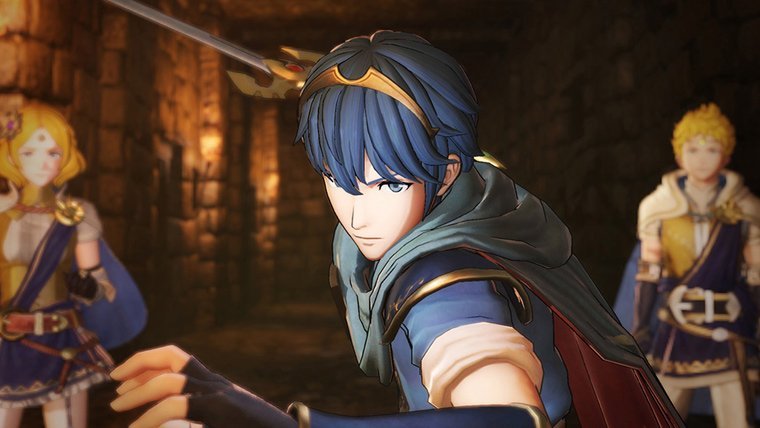 During its press conference at E3 2017, Nintendo released the latest trailer for the Koei Tecmo developed Fire Emblem Warriors for the Nintendo Switch. The latest trailer shows off glimpses of its story (there’s another dragon!) and three more playable characters: Corrin, Ryoma and Xander.

As a fan of the series ever since I played Fire Emblem Gaiden when I was younger, anything bearing the Fire Emblem name will be an instant sell. Despite that, however, I can’t help but feel slightly disappointed with Fire Emblem Warriors at the moment — the roster is too “safe” and the series as a whole isn’t really represented. Don’t get me wrong: I like the three newcomers — despite any reservations I might have about about Fire Emblem Fates itself. However, by including three characters from Fates, Nintendo has effectively represented the series with characters from the same four games yet again.

Of course, I understand why these titles have been repeatedly used by Nintendo to represent the series. For example, Shadow Dragon was the first Fire Emblem game in the series and Path of Radiance was the first Fire Emblem available outside of Japan on a console. But it strikes me as odd that a series with twelve entries only consistently has four games representing it, especially when Nintendo has made it clear it is trying to increase the popularity of the brand.

Showing off characters from some of the lesser known entries is exactly what Nintendo needs to do in order to attract newcomers (sure, there’s Fire Emblem Heroes, but many people steer clear of Gacha games) and keep the attention of those who have just recently started out. Not only that, but some of these entries are among the most unique and influential in the series. For example, there’s Genealogy of the Holy War which was the first game in the series to have a pre-promoted Lord character, as well as “child” units and the skill system. With that in mind, why not include Sigurd or Julia (who would add some variety since she’s a magic user)? Meanwhile, there’s Thracia 776 which is regarded as the most difficult entry in the series; so why not include Leif? Then there’s also The Sacred Stones, which introduced trainee classes and the branching class-change system; so maybe Eirika and Ephraim would like to enjoy some time in the limelight.

Then, of course, there’s Gaiden or Fire Emblem Echoes: Shadows of Valentia as its presently known. Not only is it set in the same universe as Shadow Dragon, but both games are connected to  Awakening. If Nintendo is serious about remaking its previous games using “Echoes” as the moniker, then it has to add references to the game when it can — especially since its the “newest” game in the series. That said, Celica would be an awesome addition to the game, as she’s not only important to the game’s lore, but she is interesting gameplay wise with her ability to use swords, as well as black and white magic.

All in all, I have faith Fire Emblem Warriors will have an interesting cast, but I’m worried it won’t have a varied cast. Sure, you could only include characters from the more popular titles and the game would still be great, but if the game truly wants to showcase “heroes from other worlds” then Nintendo will have to include characters from more than just four or five of them. Fire Emblem has a long and interesting history, and now is the time for Nintendo to show that off.

E3 Fire Emblem Koei Tecmo Nintendo
You May Like