Mount & Blade II: Bannerlord – The Most Fun I’ve Had in an Unfinished Game

Calradia is unforgiving, rewarding, and janky. I’m deep within Aserai territory, having agreed to escort a Lycaron trader’s caravan across the southern-most kingdom. I was feeling pretty damn confident at this point – I had a sizable army and what I thought was a healthy fortune of Denars stored in my clan’s coffers. I had been playing as an honorable mercenary company up until this point, so why not assist some local businesses exchange their goods without looters or raiders stealing everything?

Fifteen minutes later the caravan had become a burning pile of corpses after I lost sight of it for two minutes, and my army had been whittled down by half.  I no longer had the money or food required to keep them happy, because I foolishly upgraded every unit the moment I could. I was broke, starving, and in desperate need of work, but no one was hiring.

I finally broke, and raided my first settlement. I returned with my ill-gotten goods to the Southern Empire with shame haunting my every step. That was until I pawned everything off and found myself with more Denars than I started my failed venture with. Not a mere coin or two more – oh, no! –  but a clean twenty grand now sat pleasantly in my pockets. I had spent hours struggling to hit half that amount, taking on whatever work I could find and slaying all wayward looters who fell upon my roving warband. This though – this changed everything. 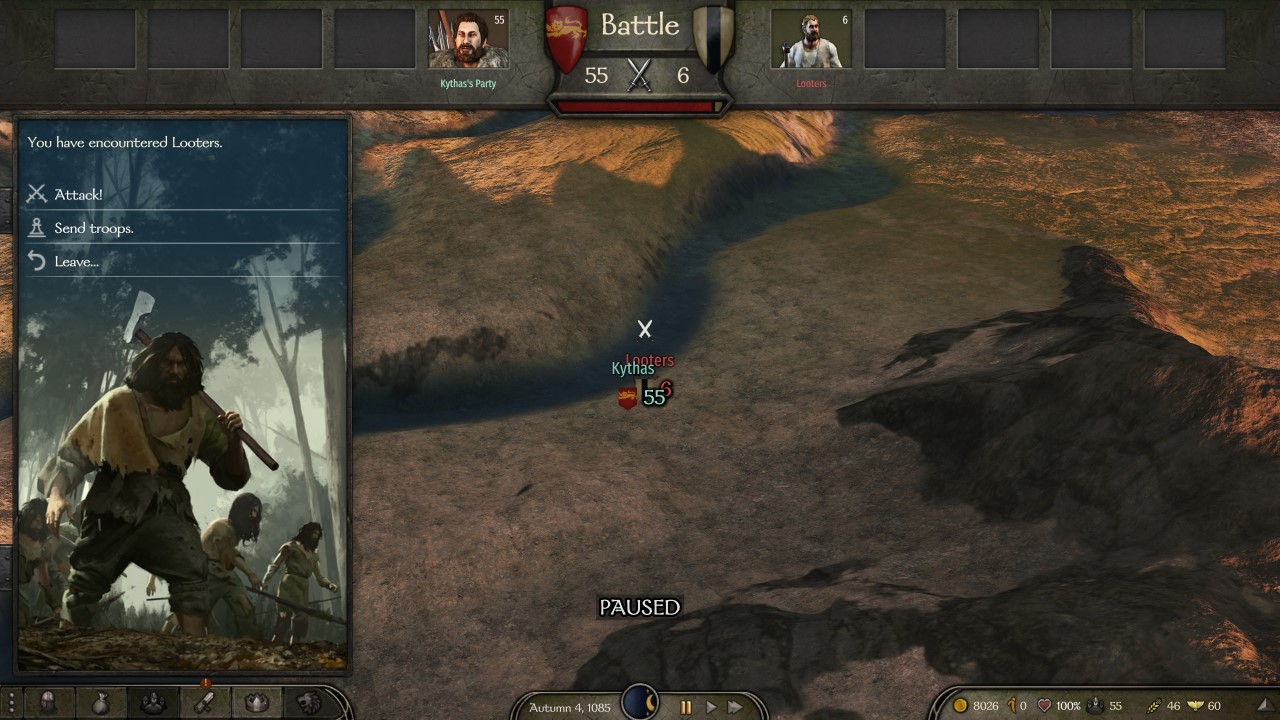 An hour later I was a vassal for the Southern Empire with my own fief and over seven million Denars in the bank. Turns out being a pillaging bastard paid well.

That’s been my experience with Mount & Blade II: Bannerlord thus far. TaleWorld’s long-in-development sequel to Mount & Blade: Warband had a bombastic first week, where as an Early Access title it beat out AAA heavy-weights like DOOM Eternal to become the best selling game on Steam in 2020. For a title largely regarded as “niche,” hitting over 170,000 players on the first day certainly cemented the series’ appeal.

And, so far, it’s sunk its teeth deep into me. Confession time: I typically dislike sandboxes, and I’m not a fan of the medieval setting. By no means am I saying they’re bad; they’re just not my jam, kinda like bananas (it’s a texture thing). Color me surprised then after I blinked and found twenty hours had evaporated after installing Mount & Blade II: Bannerlord. Perhaps setting everything to Very Easy helped (I am a new player after all), but I’ve been able to settle in and really learn what makes this series special. There is something about the game that’s clicking with me. Hell, there are many things about the game that are clicking with me. I love the idea of roving around this large map playing pawn within a massive kingdom and joining their war parties to besiege castles. I like that I can sit back and create a trade empire if I feel so inclined, or work to capture and execute as many nobles as I can find. It’s a strange sense of freedom only found in sandboxes, and TaleWorld’s latest has led me to re-evaluate my prior thoughts on the genre.

I believe the elements that sold me entirely on the game are the large-scale battles and accompanying combat. The directional-based fighting is still kicking my ass in ways, but I’m slowly mastering it and I enjoy having to learn where in my weapon’s swing I deal the best damage. Baiting, feinting, and properly blocking all require some nuance, and long-time fans are already in multiplayer soaking the grassy fields in my blood.

The best part of the game are the sieges, with hundreds of troops pushing against each other to take a keep. The giant field battles are cool too, but often I feel my commands go ignored. Sieges, on the other hand, are big belligerent bashes over a bastion that feature catapults, battering-rams, and a swarm of angry archers pelting the attackers with a storm of arrows from the bulwarks. There are plenty of performance issues that sour sieges somewhat, such as the broken pathfinding that not only sees your troops running into the walls, but strangles your CPU to near death, yet I can’t help but throw myself into the fray whenever the opportunity arises. 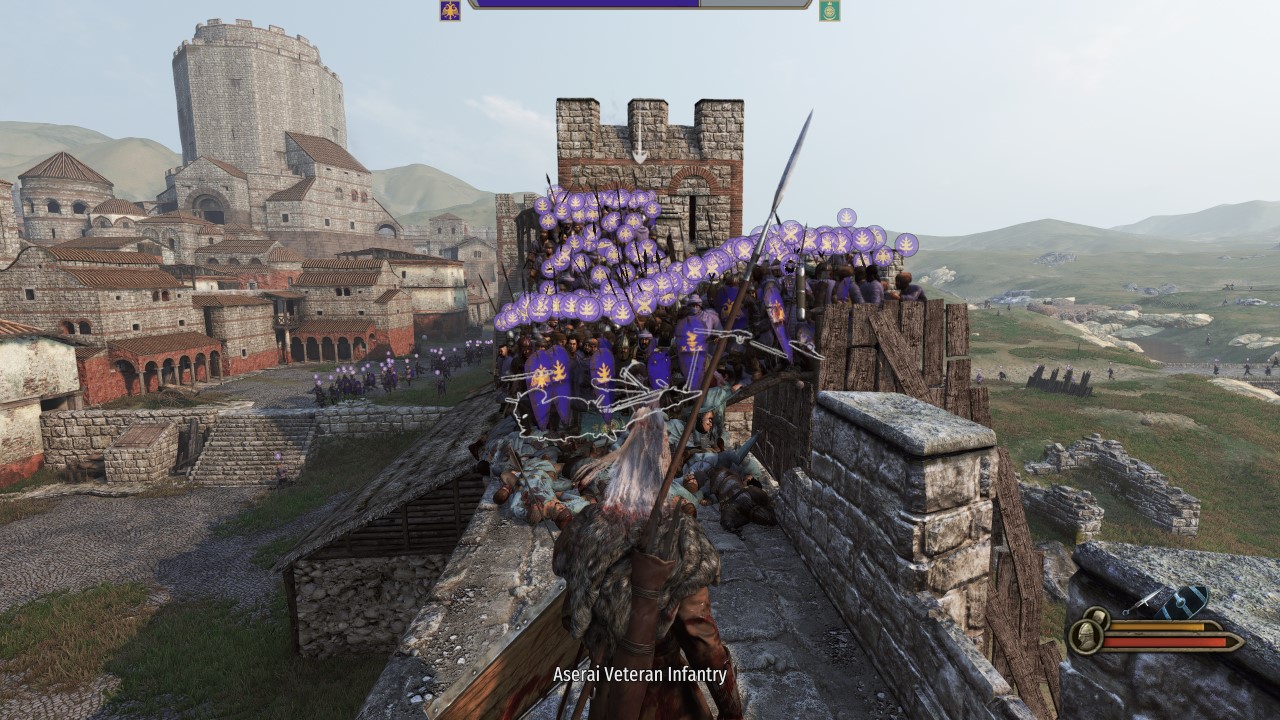 On that note, the game is clearly an Early Access title with many features missing or straight-up broken. I can’t create a kingdom of my own quite yet, so I’m stuck faffing about as either someone else’s lackey, or as a for-hire mercenary company. Raider hideouts are poorly designed, though TaleWorlds seems aware of this. Kingdoms have a habit of snowballing the entire map (though work is being done to address that), and trade balance feels off. Actually, balance in general needs leagues more tuning, but it’s not broken to such an extent that it renders the experience bland.

In some ways the unbalanced systems are a part of the charm. Watching looters capture the same nobles and leaders over and over again is mildly amusing, and seeing a kingdom slowly consume the entire continent can create a tense game of survival and intrigue as you work your way into the conquering nation’s favor. All of these systems need further fleshing out (such as diplomacy), and dialogue options practically don’t exist at the moment, but the groundwork TaleWorlds has laid has me excited to see what comes next.

I’ve still not entered into a marriage, or fully explored setting up workshops and crafting my own weapons. For all that is either missing or broken there is still plenty to do in Mount & Blade II: Bannerlord, and I’m still poking at the edges of it all. I need to learn how to better manage my fief and build up a proper garrison. I have yet to figure out how to swap alliances without getting demolished by my former allies. 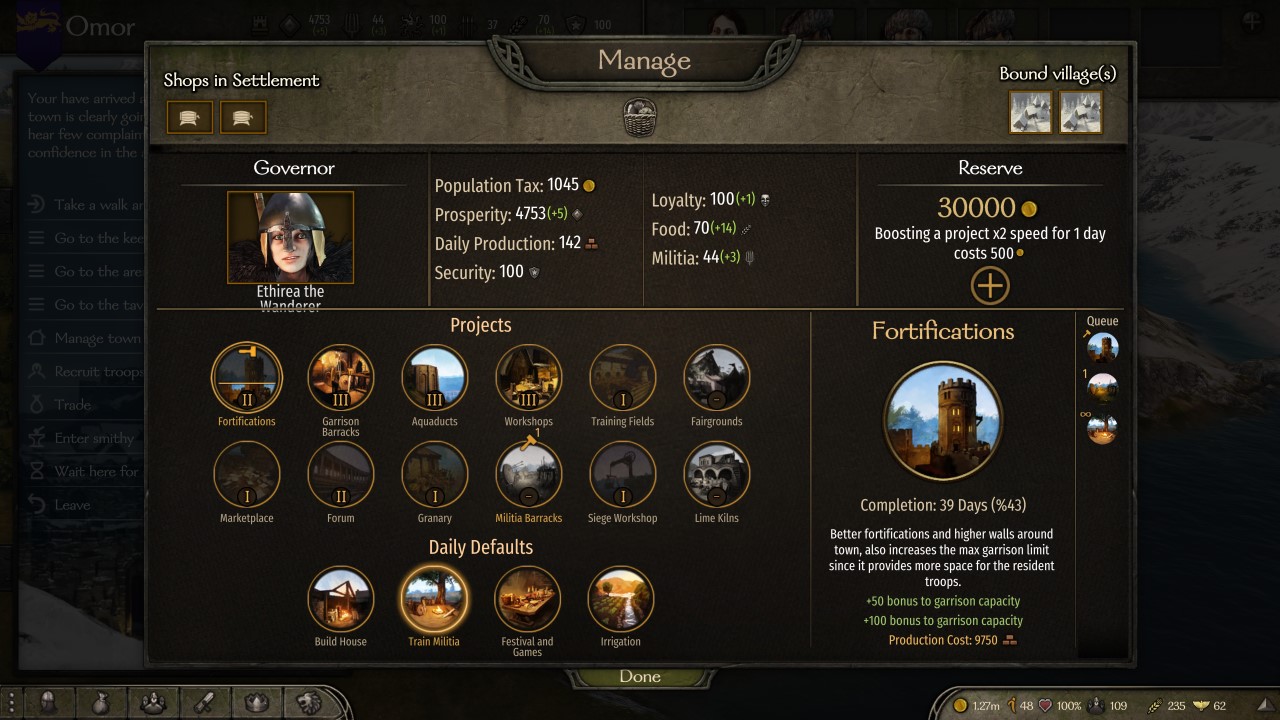 I’m pretty sure the seven million Denars I made was a bug, so I have to learn the proper ways to make a fortune as a landowner, and how to leverage my Influence. I’ve barely touched on the various ways I can level and build not only myself but my companions, and when all the perks are working as intended I imagine the skill trees will lead to all sorts of divergent play.

TaleWorlds has been patching the game damn near every day since launch, mostly to fix the abundance of crashes plaguing the game (thankfully I’ve only suffered two), but they have been tweaking the game as well. I want to start a new run on a higher difficulty to see what I’m missing and to take advantage of the faction alterations made (snowballing is apparently less of an issue now).

If this sort of dedication is what we can expect hereon out from TaleWorlds then I can’t wait to see what Mount & Blade II: Bannerlord morphs into when it finally leaves Early Access. Throw in a wide-range of current and potential mods and I can see myself losing hundreds, if not thousands of hours of my life in Calradia.

Maybe medieval sandboxes are my thing after all?

Home / Original Articles / Mount & Blade II: Bannerlord – The Most Fun I’ve Had in an Unfinished Game