Opinion: This Whole SNES Classic Fiasco is Getting Ridiculous

The latest news in the world of video games at Attack of the Fanboy
November 16th, 2017 by Dylan Siegler 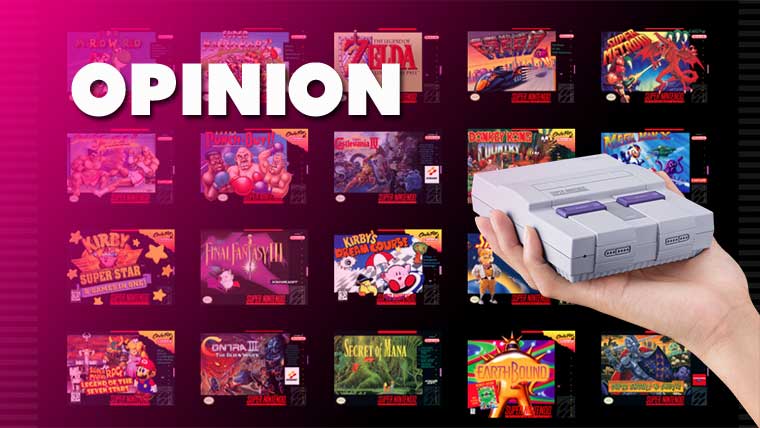 Gather ’round, children, and I shall tell ye a tale. Once, there was a micro-console called the Super NES Classic Edition and everyone wanted it. It contained such classic video games as Super Mario World, The Legend of Zelda: A Link to the Past and Super Metroid, as well as 18 others. Old Nintendo fans who grew up playing these games, as well as newer fans who wanted to play them for the first time, all hoped to get their hands on a SNES Classic, as it came to be called. But alas, the supply of the SNES Classics was too low, and the demand too high, and thus the majority of SNES Classics sold went to scalpers, evil people who had no intention of playing the games themselves, but rather took advantage of the product’s limited supply to re-sell it online for ridiculously inflated prices. No one was happy with this.

Okay, so most people (well, most people who are into video games) probably know what’s been going on with the SNES Classic by now. Just like the NES Classic before it, it is an incredibly popular item, but way too few of them have been produced. And it’s getting ridiculous. Earlier this year, President of Nintendo of America Reggie Fils-Aime stated that production of the SNES Classic would be “dramatically increased” over that of the NES Classic, but it is clearly still not enough. Let me tell you about my latest encounter with the SNES Classic, which should give you a good idea of how this product is being handled.

This week, Walmart announced that they would be receiving new shipments of SNES Classics and that they would go on sale on their website at 11:00AM PST/2:00PM EST on November 15, 16 and 17. I, like many Nintendo fans, haven’t been able to get my hands on a SNES Classic of my own yet, so of course I was planning on getting mine through Walmart now, despite my previous unfortunate encounter with Walmart when I tried to pre-order a SNES Classic from them, only to have my pre-order cancelled. But I didn’t have any more luck than last time. But why shouldn’t I have? I was sitting at my computer, constantly re-loading the page with my mouse over the “Add to Cart” button at exactly the right time, just like any good, mindless consumer. Here, let me tell you specifically how it all went down.

Yesterday, November 15, the first day new shipments became available on Walmart’s website, I did exactly what I just described above. As soon as the clock hit 11:00, I reloaded the page and clicked “Add to Cart.” Holy crap, I successfully added a SNES Classic to my Cart! Could it be? No. I clicked “Checkout” only to receive the message, “This product is no longer available.” I looked back at my clock. It was still 11:00. I reloaded the page. It was now updated to show that the product was sold out. Are you kidding me? It hadn’t even been a full minute and they’re already sold out? It was still in my Cart, though; I just couldn’t Checkout, since it wasn’t in stock anymore. So I figured I’d try again the next day, now with the head start of already having the product in my Cart. So I tried again today, November 16. I sat at my computer, reloaded the page as the clock hit 11:00 and clicked “Checkout.” Wow, it worked this time! Oh wait, now it’s asking me to confirm my payment method. Yes, I’m sure whatever it says is fine; I just want to confirm my purchase already! Oh, now I have to confirm my shipping address. YES, EVERYTHING’S FINE, JUST GIVE ME MY SNES CLASSIC! Finally, we’re on the last page. All I have to do is click “Place Order.” *Click* “This product is no longer available.” … Less than twenty seconds had passed. It was already sold out. Again. I’d try again tomorrow, but I’m getting called in for my contract job, so I kind of can’t. Oh well; it’ll probably just sell out before I can even confirm my purchase again anyway.

This whole debacle did leave me wondering how this was all even possible. Every unit Walmart got in sold out in twenty seconds? Both times? Probably to be all three times? I know it’s a popular item, but come on! When I “pre-ordered” a SNES Classic from Walmart a few months ago, I was able to confirm my purchase a full half hour after the posting went up. Granted Walmart ended up cancelling all pre-orders anyway, but I’ve heard other stories of people having not quite as much trouble buying the SNES Classic as they did with the NES Classic. I heard from one person that he was able to buy a SNES Classic from an online retailer forty-five minutes after the posting went up. Obviously, that’s not a lot of time either; it’s pretty ridiculous for any product to completely sell out in forty-five minutes. But forty-five minutes is a hell of a lot longer than twenty seconds! How are all units selling out in less than twenty seconds?

As far as I can tell, there’s pretty much two possibilities. One is that there were likely thousands upon thousands (probably still an understatement) of other people across the country doing the same thing that I was doing and they just did it faster. That’s possible. Like I’ve said, this is an incredibly popular item and there are tons of people who haven’t gotten one yet. So maybe that’s all it is. Just other fans who were just faster to click than me. But something tells me that’s not the whole story.

In an earlier article I wrote about the SNES Classic’s under-production, I discussed the vile heathens known as scalpers, people who buy rare products with no intention of using them, but rather just sell them on eBay or Amazon for twice the retail price. Many of these scalpers use what are known as bots, basically programs that will perform a set of functions for them on their computers. Many scalpers have been using bots to buy items such as NES Classics or SNES Classics as fast as possible, to make sure they get them before anyone else, just so they can re-sell them later for more money than they’re worth. Something tells me that this is what really happened to all those units Walmart had recently. Scalpers’ bots bought them all at speeds impossible to attain by mere humans who just want to play some good games.

I already discussed this whole scalper problem at length in my article about SNES Classic’s production issues which I linked to in the last paragraph, so I won’t be redundant; you can go read that article if you want to. In short, it sucks for everyone that SNES Classics are being produced so scarcely that the whole market basically got taken over by scalpers. Well, it doesn’t suck for EVERYONE. It obviously doesn’t suck for the scalpers, who are profiting off of other people’s misery. And it doesn’t suck for Nintendo, who are selling every SNES Classic they make, regardless of who they’re going to. But it sucks a lot for actual Nintendo fans.

In Reggie Fils-Aime’s statement about increasing production of SNES Classics, he urged fans to not succumb to scalpers and instead just wait for more shipments, ensuring that there will eventually be enough for everyone. Well, so far this hasn’t been the case. And something tells me it won’t be the case in the future if the thing keeps selling out within twenty seconds of it becoming available again. Nintendo hasn’t made any specific announcements about this, but it seems likely that they’d probably be producing and shipping more and more SNES Classics as we get closer and closer to the holiday season, since that would obviously be a huge time for selling them, especially since both the NES Classic and SNES Classic were intended as holiday items in the first place. So hopefully everyone who wants a SNES Classic will be able to get one before the end of the year. But the likelihood of that happening doesn’t appear particularly great. Sure, some people who really want the micro-console will probably be able to get one, but most will probably continue to go to scalpers with bots.

I, for one, will probably give up on my chances of getting a SNES Classic if I can’t manage to find one before the end of the year. If I can’t get one when it’s probably going to be at the peak of its production, chances are I’m not going to get one, so I might as well stop trying and avoid further frustration. I might as well just buy Super Mario World and A Link to the Past and maybe a few other games on my Wii’s Virtual Console for eight dollars each, which is a lot less than the $80 I’d be spending on a SNES Classic at retail price anyway. Plus, just buying the games on my Wii is something I know I’ll be able to do, as long as I get around to it before the Wii Shop gets taken down. That sure beats sitting at my computer, reloading a page and hoping I can click faster than a thousand bots.

It kind of sucks because there are at least a couple of games that are hard to find outside of the SNES Classic. Star Fox 2, for one, is exclusive to the micro-console. And personally, I’ve always wanted to play Earthbound, which is near impossible to play in the Americas, unless you either have a SNES Classic or can buy a digital copy from a New 3DS eShop. I have a 2DS myself because it was a lot cheaper than a New 3DS and I’m not about to spend $150 or more on a New 2DS or New 3DS just so I can play one game. So I might not ever get to play the game, unless I take the morally ambiguous road of emulating it, but I’d rather not do that. Anyway, point is, it sucks that I and many other Nintendo fans will probably never get a SNES Classic that we’re all perfectly willing to pay for because production is so low and scalpers have taken over the market. At the end of the day, it’s just a lot cheaper and easier to buy a few of these games on a Wii or Wii U Virtual Console. So that’s what I’m probably going to end up doing, just like how I bought Super Mario Bros. 3, The Legend of Zelda, Kirby’s Adventure and a few others on my Wii’s Virtual Console after I couldn’t get a NES Classic.