Featuring Dante from the Devil May Cry HD Collection. Okay, it’s confession time. I’ve never played a mainline Shin Megami Tensei game. As a self-proclaimed lover of RPGs, SMT has always been one of my shameful blindspots. I’m a huge Persona fan too, as many people are, but I’ve never given the main series a shot for some reason or another. I was just going to wait for the upcoming Shin Megami Tensei V to dip my toe into the series, but now a much more appealing jumping on point has fallen into my lap: the HD remaster of Shin Megami Tensei 3 Nocturne. I don’t know what took me so long to get into this series, but now I can’t get enough. 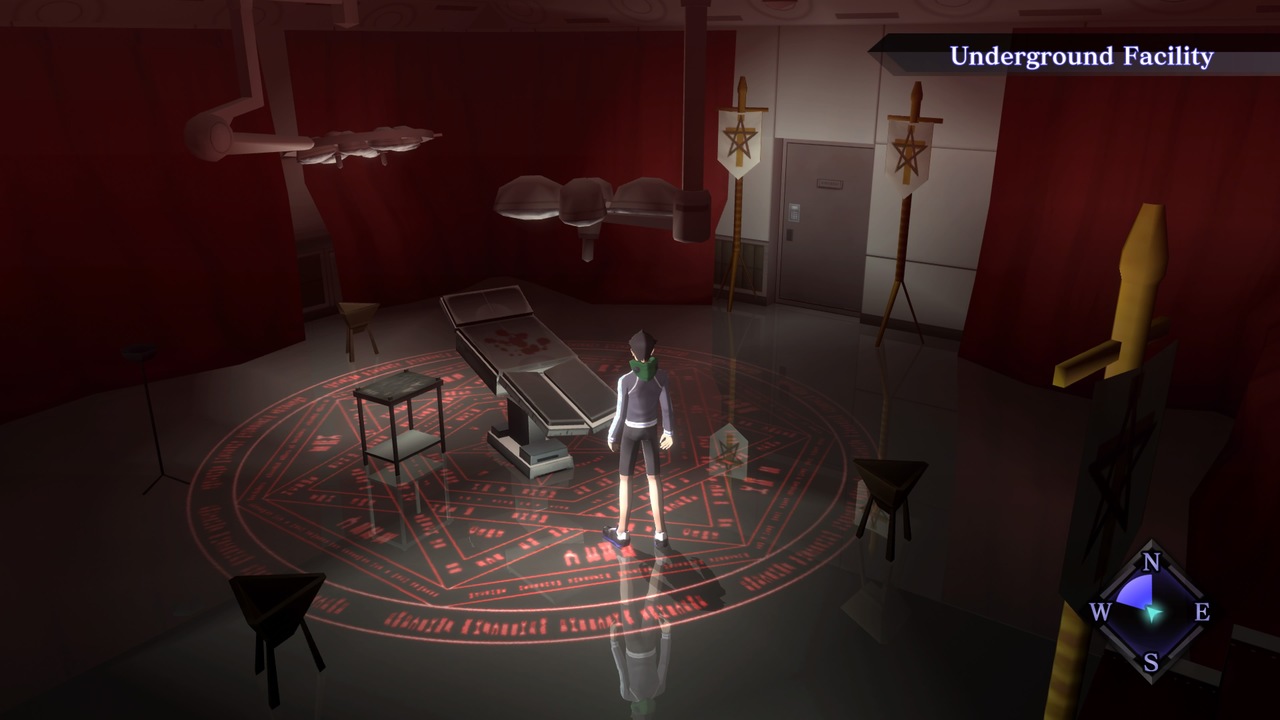 Among SMT fans, Nocturne is one of the most beloved entries in the series, and it’s clear why. The game has a very unique atmosphere and mood that draws you in right from the start. It begins like most JRPGs do, introducing you to the main cast of characters and setting up a central mystery, but Nocturne wastes little time kicking things into high gear. The start of the game can feel a bit overwhelming with the number of people and proper nouns it throws at you, especially given the crazy places the game goes, but the flood of questions actually serves as a compelling hook that makes you want to exhaust every bit of dialogue to figure out what’s going on.

After that dense opening hour, you’re let loose in a post-apocalyptic Tokyo. It’s surprisingly quiet. You aren’t given many directions, there aren’t many people to talk to, and for the most part, you’re alone. Very few humans remain in the ruined hellscape that was once Tokyo, and the ghostly spirits that still remain aren’t the conversational type. Demons are the main sources of interaction, and most of them want to kill you. You can convince them to join your party using SMT’s signature negotiation system, but they feel less like party members and more like tools for you to use in combat, further contributing to the game’s isolated atmosphere. 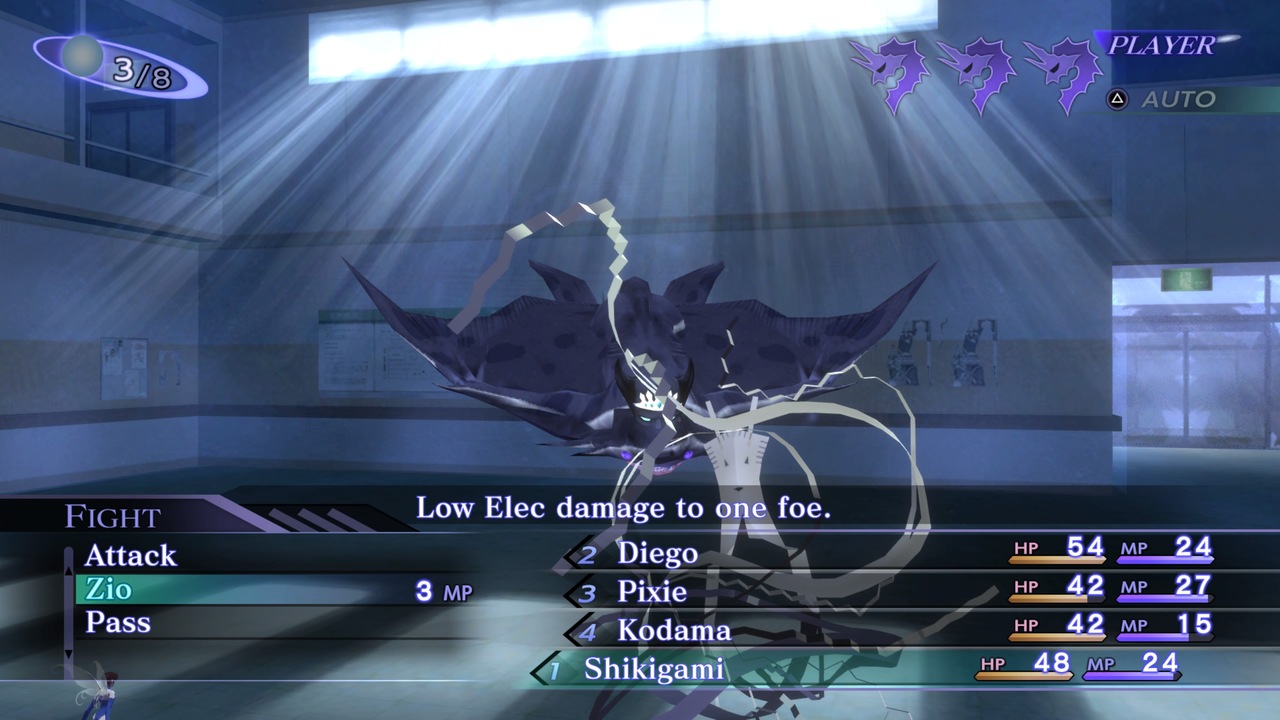 Speaking of combat, it’s deceptively simple. You have four actions that your side can take before it switches to the enemies’ turn where they can take four actions themselves. However, by targeting weaknesses and scoring critical hits, your abilities will only cost half an action, allowing your party to strike eight times before the enemies get to make a move if you play your cards right. However, certain things like missing an attack can take up two actions, which can drastically shorten your turn. Of course, these rules also apply to the enemies, making fights feel fair. It’s deeply satisfying to decimate demons before they can take their turn, and this system makes buffs and debuffs incredibly useful skills to have.

While the game itself is great, I do have some issues with the remastered version. I’ll get the good things out of the way first, though. There’s full English and Japanese voice acting, all of which is very well done from what I’ve heard so far, and there are new difficulty settings to make the game more accessible for casual players. Also, skill inheritance is no longer random, something veteran players are sure to appreciate. Finally, my personal favorite new addition is the suspend save feature which allows you to save your progress and exit the game at any time. 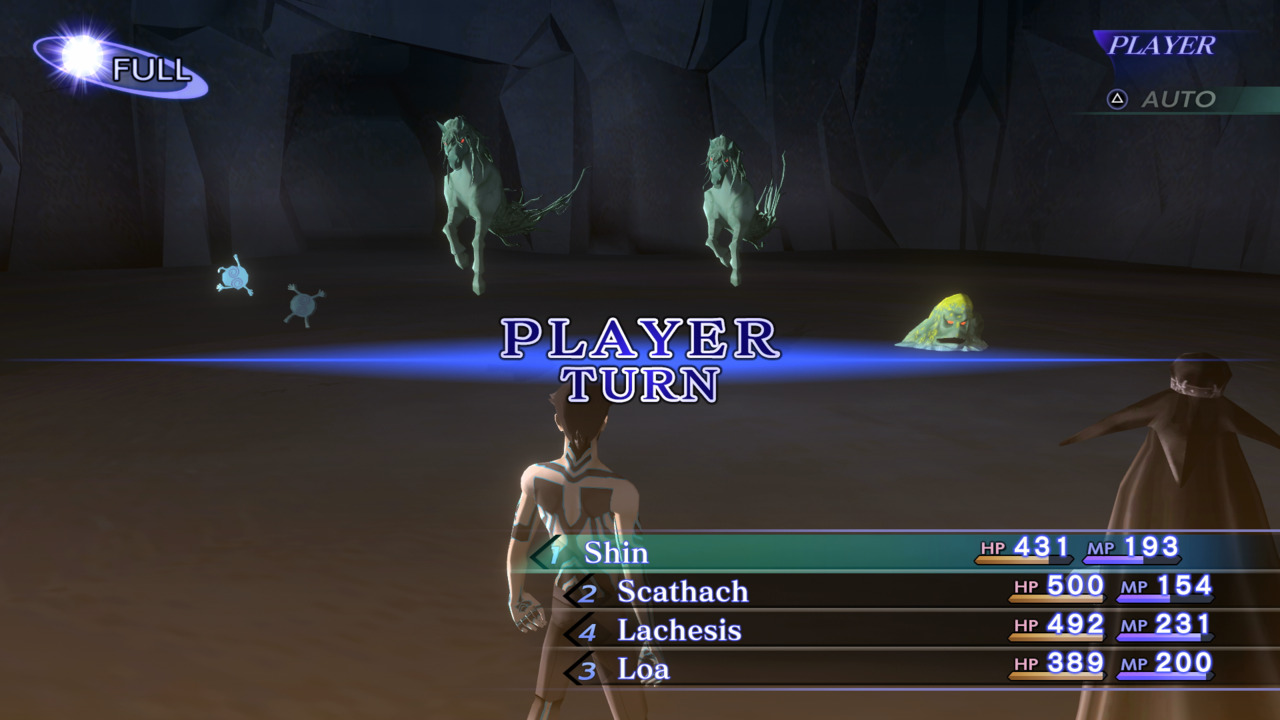 Unfortunately, that’s the extent of the new features added to this remaster. Textures and models have been touched up slightly, but for the most part, it’s just a simple upres of the PS2 version. Prerendered cutscenes still play in their original 4:3 aspect ratio and look a bit blurry compared to the rest of the game. These aren’t necessarily bad things, but given the price of this remaster, it would’ve been nice to see at least a little more work done to this 17-year-old PS2 game. My main gripe with the remaster, however, is the music. It’s heavily compressed and sounds really bad. It’s incredibly apparent when wearing headphones, but I could still tell through plain old TV speakers. It’s not that big of a deal for the ambient environmental tracks, but battle themes sound noticeably low quality. It’s a shame given how great the soundtrack is, too.

While it’s a fairly barebones remaster, Shin Megami Tensei 3 Nocturne is still a classic JRPG at its core and it’s shaping up to be a great jumping-on point for those that have been curious about the series or Persona fans who want to give the main series a shot. Whether it’ll maintain my interest over the dozens of hours required to see the credits remains to be seen, but for now, Shin Megami Tensei 3 makes a strong first impression. In the meantime, I’ll keep dungeon-crawling away in order to get a full review of the game up in time for release.

Shin Megami Tensei 3 Nocturne HD Remaster will be released on May 24 for PC, PS4, and Nintendo Switch. Purchasing the Digital Deluxe Edition of the game grants four-day early access beginning on May 21.