South Park: The Fractured But Whole is Everything I Wanted in a Sequel – Hands-On Preview I am a massive fan of almost all things South Park, despite not being allowed to watch it during its first few seasons (this shows a few things: that I’m fairly young, that the show is really old, and that my house was a little strict). Video games had been a part of the franchise, but they never truly lived up to the show, either lacking the pointed satire, or having the typical gameplay problems associated with licensed titles. That all changed with the release of South Park: The Stick of Truth. And for more information about the game, check out my interview with the Lead Game Designer.

South Park: The Fractured But Whole is simply the next logical step for the series

The game was a marvel for fans of the series, almost literally putting you right into an episode of the show. The graphics were perfect, the writing was stellar, and the humor was spot on. So, when a follow up to that game was announced, fans were both excited and skeptical. Could lightning be caught in a bottle once again? Well, if my short time with that game at PAX West 2016 is any indicator, yes, it totally has been.

South Park: The Fractured But Whole is simply the next logical step for the series, adding in some gameplay refinements, but more importantly shifting the satire toward the pop culture phenomenon of the day: superheroes. Taking the Mysterion and Coon storylines from the show and expanding upon them, just as the first game did with the Lord of the Rings parody, The Fractured But Whole is already looking like a blissfully satirical take on all things comics and superheroes.

Starting out right where the first game left off, the new kid saved the town of South Park and is recognized as a true hero. Of course, that lasts all of a few minutes before the kids all get bored and move on from their fantasy role playing and into their superhero personas. Cartman is the leader of Coon and Friends, a group of superheroes who strive to protect the town. The peace doesn’t last long though before Coon and Mysterion butt heads and we end up skipping phases one and two of the Marvel plan and heading right toward Civil War. 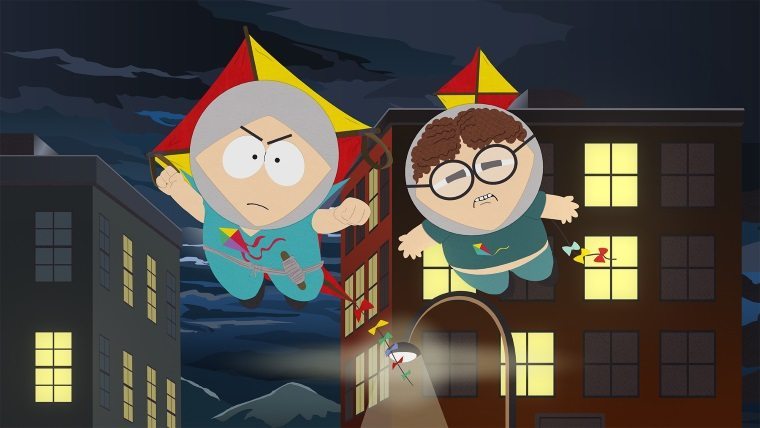 I simply can’t say enough about the writing of South Park: The Fractured But Whole. It so easily and perfectly captures the essence of what makes South Park so great, and has allowed it to endure for so long. In just the few minutes I played there were already a few laugh out loud moment, such as using The Human Kite and the new kid’s special farting ability to glide up to the top of a nearby building. Or the not-so-subtle references to the differing quality of Marvel and DC films. With such ripe territory for satire, The Fractured But Whole should have players laughing from start to finish.

But this isn’t just a continuation of the first game, things have been changed quite significantly in the gameplay department as well. Players no longer choose a fantasy-style class, instead picking from a roster of superhero types. There were a few to choose from, but for this demo I was only allowed to go with the Speedster. Based around characters like The Flash and Quicksilver, the Speedster’s abilities allow him to deal quick damage, sometimes to multiple enemies.

Combat was, once again, a simple affair, with each ability just a button press away. Still, there was strategy to the fighting here. A new addition is the concept of movement and lanes. Players are no longer stationary throughout the fight, instead being able to move freely within the play area. You can get close to enemies, but that might draw their fire more quickly. You can also line up so that a single blow will deal damage to a couple of enemies. With so little time I couldn’t dive too deeply into the combat system, but it looks like a nice little improvement over The Stick of Truth.

That’s the summary of my feelings about South Park: The Fractured But Whole. It is looking like a fantastic sequel that takes what worked in the first one, improves on it a bit, and tries to fix what might have not worked so well. The real test is in the writing though, and so far it is looking excellent. I hated to stop, but also really want to experience the game from start to finish.

We’ll all be able to do that when South Park: The Fractured But Whole hits PS4, Xbox One, and PC on December 6th.

Home / Original Articles / South Park: The Fractured But Whole is Everything I Wanted in a Sequel – Hands-On Preview