South Park: The Fractured But Whole Interview – New Combat and the Joke That Went too Far 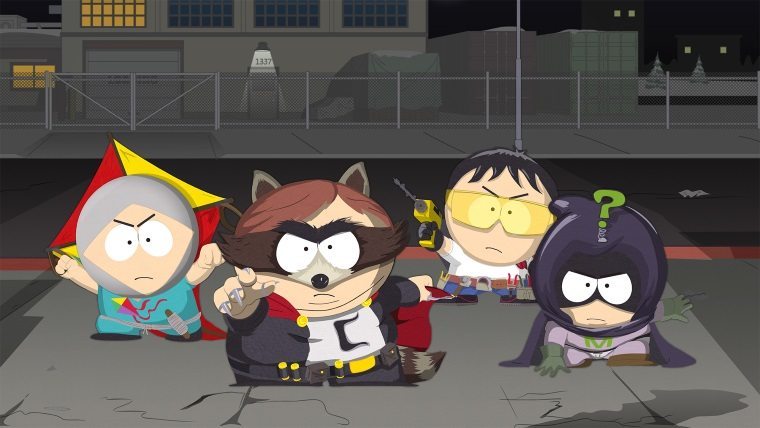 Earlier this month I got to sit down and play South Park: The Fractured But Whole at PAX West 2016, I loved it. Before even getting to play the game though, I had a chance to interview Ken Strickland, the Lead Game Designer for South Park: The Fractured But Whole. As a big fan of the first game, which the team behind this had not actually worked on, I had a lot of questions for Ken. And for more info be sure to check out my hands-on preview.

Hey Ken, thanks for talking to me. To start off, where did the initial idea for South Park: The Fractured But Whole, and the superhero storyline come from?

That absolutely came from Matt Stone and Trey Parker. Looking for a game that was as rich as the fantasy one from the last time. They already had a bunch of Coon and Friends episodes, and we were very hungry to actually get in there. We had a bunch of gameplay ideas ready for it.

What did you guys pitch to them? When they came to you and said “this is what we want to do”, what was the firs thing that was in your head?

Pitching the revamp of combat. Obviously I’m a huge fan of the first game, and one of the things that I really wanted to double down on this time was giving combat more surface area within the town. Not making it a fight in some abstract space, but more like “I want to go fight in Stan’s house. I want to go to the City Hall. I want to go to Skeeter’s Bar.” you know? And that dovetailed very nicely with a gameplay thing that we really wanted to do, which was to make the battles more tactical. But not in a complex sort of, like look up spreadsheets, three levels deep sort of way. But actually give the player some real options on how they wanted to play, and make that stuff actually matter.

Which came first for you all, the story or the gameplay?

It was simultaneous. So they came to us with that initial superheroes concept, we pitched back the combat and some of the other improvements that we would like to see. After that, the two studios would get together regularly to kind of build up the story and gameplay in parallel, and bounce off each other.

When does The Fractured But Whole take place? What sort of changes are there in the town when it starts?

Fictionally it’s only a few days later, but the town has changed a lot. It’s been four days, but the kids have gotten bored of fantasy. You have a very Metroid moment where you go from being king of the world, to just another scrub. There will be touch points there for the last game. 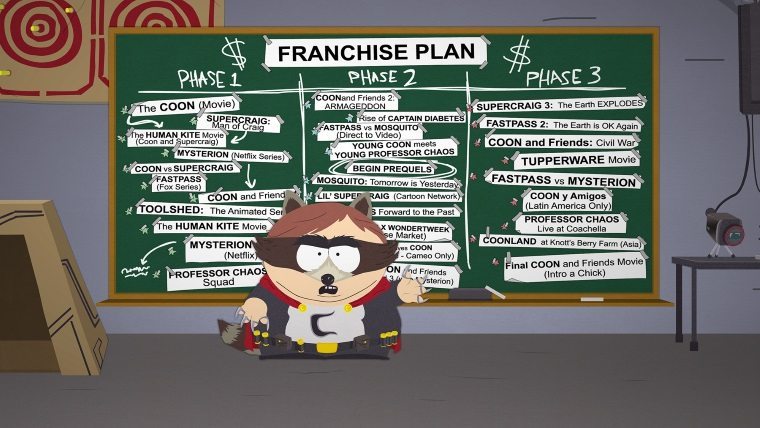 Aside from the altered combat, in terms of the gameplay, what is something that you can think of that was a really good idea that your team threw in there?

Besides all the combat revamps, I’d say teaming up with your buddies to explore the town. Using Stan and Kyle and the other kids to help you. They essentially become your puzzle tools in a way. I think also finding a way to make a crafting system that was uniquely South Park. Cause half the fun is going into people’s houses in the town, finding stuff from the show, and it was a shame that you would pick up these named objects and then sell them immediately. It was more fun to say “I got this and I’ve got the horrible items from this other episode, how can I make that relevant to the player?”

Getting away from the game itself, let’s talk about the Nosulus Rift. Watching the trailer for that I, and probably many other people, thought it was a joke…but it’s real!

Yep, that’s Ubisoft! It was just born in somebody’s brain over in France, but you know, we’d been joking around on the team that we’d been spending so much time really crafting the farts and the soundscape of this poor child’s asshole. And wouldn’t it be amazing if we could bring that to other senses. But to us it was a pipe dream, until they finally said “yeah, we’ll build it,” and suddenly it was real.

I’m really worried about this kid. They clearly need to see a doctor.

This is South Park, and South Park pushes the limits, has there been anything where your team, or maybe Matt and Trey said, “that’s too crazy” or “that is too much”?

I don’t know if it was too crazy, but we were proud of the moment where we finally pitched something to them that was too fart-based, too shit-based. We had a certain power that we wanted to show off, and literally at some point either Matt and Trey said “actually, I’m really worried about this kid. They clearly need to see a doctor. Bring it back.” There’s comedic reasons for it too. They think a lot about how long you can step on a joke before it gets old, and they are really tuned to the timing of things. It’s been interesting working with them, because our game is built on systems, but all the jokes have to be fresh. You have to do a lot of stuff that you don’t have to do in other games to make sure that the lines land at the right time, and everything is fresh.

South Park and the game are built on satire. Either satirizing superheroes or virtual reality with the Nosulus Rift. What are some other things that players can expect to get satirized in The Fractured But Whole?

South Park: The Fractured But Whole, like BvS and Marvel’s Civil War, has two teams: Coon and Friends versus Freedom Pals. Which team are you rooting for?

Oh…Freedom Pals, but don’t tell Cartman. Mysterion is one of my favorite characters, and his moveset is pretty great, so I like that.

Home / Original Articles / South Park: The Fractured But Whole Interview – New Combat and the Joke That Went too Far