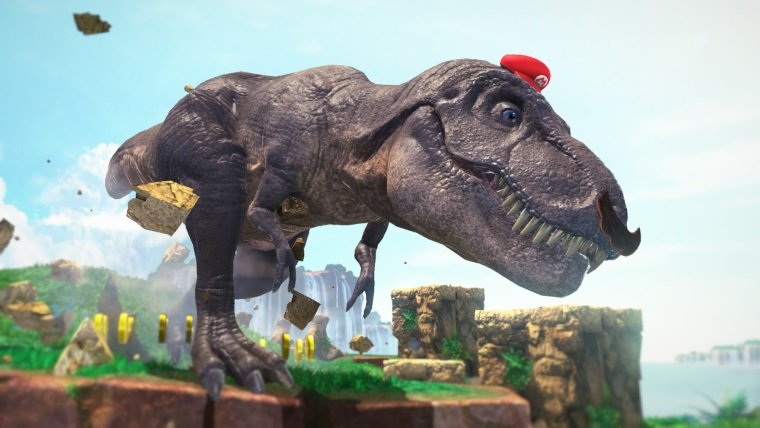 Heading into E3 2017 there were a few games that I knew I had to play. One stood far ahead of the rest though: Super Mario Odyssey. The game, which finally got a firm release date along with an awesome new trailer, had been highly anticipated for a number of reasons. Not only was it a brand new 3D Mario title, but it represented a return to the classic sandbox style of play seen in Mario 64 and Sunshine. Even more, it looked like Nintendo was not holding back, adding in some new gameplay mechanics and interesting design choices. After playing it for myself not only did it live up to expectations, but it surprised me in a bunch of ways that make this my most anticipated game of the year, and probably the best game I’ll play at E3 2017. (We also talked about Mario Odyssey on the podcast)

Picking up the Joy-Con and moving Mario around the 3D landscape felt immediately familiar, comfortable, and pitch perfect. This is a main series Mario title, and Nintendo doesn’t mess around here. Mario was responsive and controlled like a dream, and all the familiar moves were there. Before too long I was wall jumping, triple jumping and more. The landscape was open and explorable from the beginning.

There were two levels and I got to try both of them, though the desert level only for a few minutes. Each was a vibrant and beautiful arena of platforms, walls, buildings and tons of hidden objects. Heading into the heart of New Donk City my mission was to chat with Mayor Pauline (nice callback Nintendo). She informed me that a festival was underway, but they needed musicians. Heading out into the area, I quickly found a drummer, but the rest were tucked away in corners, or out on hard to reach platforms.

Luckily, if I had too much trouble I could just head back to where I entered the area, use my hat to take over a robot, fly into the sky and see beams of light pointing me toward my objectives. It’s this sort of optional help that makes Nintendo games hit the all ages market so well. But of course, I’ve mentioned Mario’s hat so now it’s time to explain that not-so-little addition. 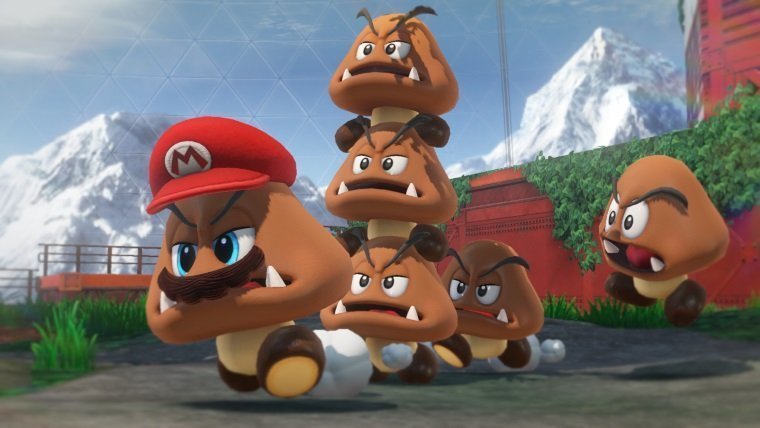 Super Mario Odyssey is all about Mario’s hat. It’s the new gameplay mechanic that makes this entry stand out so starkly from the rest, along with the realistic looking world at least. Flinging your hat around will act as an attack, but you can do so much more with it. By holding the attack button your hat allows you to become enemies or other key objects. This helps with level traversal as well as attacking other enemies or uncovering secrets. It’s weaved into the game so seamlessly that after seeing it in the trailer I immediately was able to use it in the game for a bunch of purposes. The hat is also a character, speaking to Mario throughout the demo. He’s not as annoying or obtrusive as Link’s Fi, so get ready to have a new favorite character in the Mario universe.

Back to the mission though, as I found each musician I earned a Moon, which seem to be subbing in for Stars in Super Mario Odyssey. I quickly found all four and earned those Moons, but more were scattered around New Donk City to be found. Using my hat to bust through some boxes, I was moving toward an optional Moon when the demo timer ran out. My time was up, but I’d had a blast from start to finish.

A few side observations, in the desert level there was one of the 2D to 3D transition, which was absolutely amazing to see and control. Entering an 8-bit warp pipe Mario was plastered on the wall in all his NES glory. I navigated through the small area just like I would a 2D Mario title before exiting and watching as Mario instantaneously became 3D again. It’s such a classic Nintendo touch and it worked perfectly to bring back nostalgic feelings while weaving its way into the game.

And if you couldn’t tell from the trailers, Super Mario Odyssey looks fantastic. The Switch is a powerful machine when in the right hands, and Nintendo knows how to get the most out of it. Th Desert level was vibrant, colorful, and gorgeous. New Donk City suffered a bit more. The realistic styling lends more to the rough edges that are necessary to run on Switch. Close up everything was OK, but off in the distance the cut corners were more apparent. Still, the game ran solidly with no framerate dips, so if some rendering issues off in the background are the cost then I’ll take it.

Super Mario Odyssey is looking like another amazing entry in this legendary franchise. Players old and new will find something to love here, if this demo’s quality holds for the final game. As the demo ended my only feeling was regret that I couldn’t play more. So get ready for Super Mario Odyssey to hit Nintendo Switch on October 27th.