The latest news in the world of video games at Attack of the Fanboy
May 20th, 2017 by Jose Belmonte 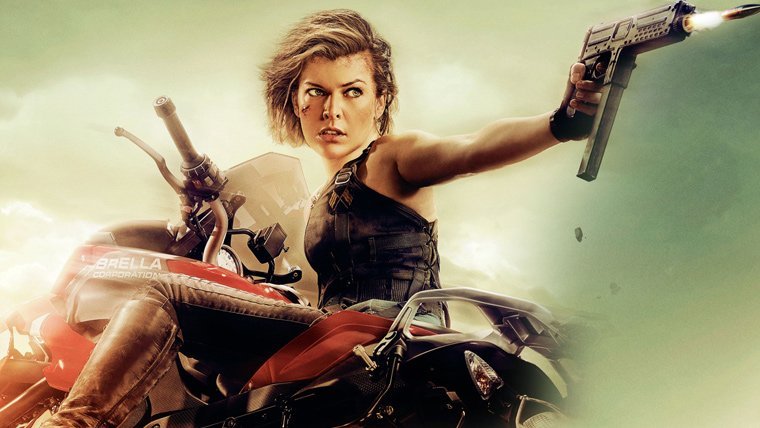 The recent release of Resident Evil: The Final Chapter on Blu Ray marks the end of a series that against all odds it has become by far the most successful videogame adaptation, collectivelly grossing more than $1 billion at the worldwide box office.

However, it will not go down in history as a beloved property by the majority of fans, mainly due to its vast differences with the games in story and tone. And even as a standalone product, these movies feature some shocking dismissal for its own continuity that makes a continued viewing session a very confusing experience.

But while we wait for the inevitable reboot, let’s recap 15 years of clumsy storytelling counting 10 times the Resident Evil movies made us claim “WTF?”

The first time you sit down to watch “Resident Evil” is a bit shocking. There is no Chris Redfield, no Jill Valentine, and no Albert Wesker. However, there is mansion in the Raccoon forest, an underground laboratory of impossible proportions, and the villain for some reason is just missing an “r” from referencing Umbrella’s founder Ozwell Spencer.

The first Resident Evil film is actually a pretty decent horror movie, but many fans were rightfully disappointed when they didn’t see the actual “Resident Evil” story on screen. And those who still had faith that the probable sequel could correct the course were sentenced to feel disappointed x6.

2. Who Are You and What Have You Done to Nemesis?

We can get over the fact that the Nemesis from Resident Evil: Apocalypse has got proportions all wrong: This Hollywood version lacks the same pressence from the original due to its shorter height and the wideness of his head and body parts. But the biggest difference comes when the script tries to make an emotional impact by writing a new backstory, in which he is a mutated version of one of the first film’s survivors.

During the climax of the movie, Nemesis recovers his memory, turns against his bosses, and dies like a hero…which is the opposite from the reason why Nemesis is such a prominent figure in pop culture. If the reason why the writers decided to make this shift was to avoid falling in the cliche of videogame being too simple, they should remember that the Xenomorph from Alien is pure evil as well and one of the most iconic figures in cinema history.

And even if this Nemesis had been a creative success, it would still be too different form the original.

3. Earth Is a Desert

The tale goes like Sony envisioned the film series as a trilogy in the best case scenario. Having reached the end of the road, writer Paul W. S. Anderson decides to take things literally and place the action at the end of the world, jumping in time to a future in which Earth is one gigantic desert. This marks the moment when the films throw any element borrowed from the games out of the window, and instead build their own world without resembling anything that could be played on a console.

There is almost nothing from the videogames to see here: No mysterious mansions, no cities immersed in chaos, no isolated islands…and even the notion of a desertic Earth also negates any of those scenarios coming back in the future (or so we thought).

But we are not done with Resident Evil: Extinction.

After re-animating corpses, turning humans into giant monsters, and drying up the Earth, by the third film in the series there was not much that the Umbrella Corporation could do to surprise the audience. The organization had already given Alice super strengh, but the protagonist would cross a line from super-strong human to comic book character when she reveals her new psychic powers. Over the course of the film, Alice will be able to move things with her mind, create a force barrier, and even control fire.

That is perhaps one of the biggest departures from the games, and something that Capcom would never introduce in the series even at its most bombastic point, because these kind of abilities would change the most fundamental gameplay experience. Even the most overpowered protagonist, Resident Evil 6’s Jake Muller, simply exchanged fireguns for his own fists.

5. Attack of the Clones

The revelation that Umbrella has been working with clones of Alice and the cliffhanger at the end are widely considered as the moment the film series jumped the shark, or simply put, it went so over the top that it could never be seen as a serious entertainment ever again. Doctor Isaacs was experimenting with Alice’s DNA so it could be used to develop a cure for the T-Virus and stop the infection.

At the end of the movie, Alice helps her clone sisters escape from the laboratory, threatening Wesker to hunt him at the Umbrella base in Tokyo.

After realizing that the Resident Evil movie series had much more life on the box office than anticipated, the writers probably came to the conclusion that they had made the protagonist so overpowered that there were not many new enemies that could present an actual threat to her.

With this issue in mind, they wrote the opening sequence of Resident Evil: Afterlife as a way to erase much of the previous developments, killing off the group of clones of Alice, and taking away her super powers. This way, the main character can return to be a relatively normal action hero who still does impressive acrobatics, but it’s not so powerful to defeat any menace with one hand gesture.

If you are minimally invested in the story of these movies, you will find their habit of making characters vanish from one entry to the other very annoying. Even more when most of the time they don’t even bother to give an explanation.

The first obvious example are Jill Valentine and Angela from Resident Evil: Apocalypse, who are both featured in the last scene, only to be forgotten in Resident Evil: Extinction. This felt especially annoying with Jill, considering that she was one of the fan favourite characters in the previous movie and one of the icons of the videogames.

Another staple of the games, Chris Redfield, is introduced in Resident Evil: Afterlife. However, despite being the brother of another main character, Claire Redfield, he is not featured in the rest of films or even mentioned by anyone. Claire, on her part, was nowhere to be seen in the fifth film, but returned for the final movie.

The biggest disappearing act is featured in the last film. While Retribution ends with Jill, Ada, and Leon on the roof of the White House, none of them return for the following film. Considering that the movie references that moment as a trap from Wesker, and that the opening shows Alice as the only living person around the area, all three are presumed dead.

8. The Cure That Had Been There All the Time

The plot of the last film in the series features Alice going back to the underground laboratory from the first movie, because apparently the Umbrella Corporation had developed an airborne antivirus and kept it in its Raccoon City installations.

However, you might have realized that this enters in direct conflict with the story of the third film, in which Dr. Isaacs was using Alice’s clones to develop a cure and exterminate the infected population.

And there is not a very rational explanation for this, because even if the version of Dr. Isaacs that we meet in the third film was not aware of this, he was still following orders from other high officials in the corporation, including Albert Wesker.

9. Return of the Clones

Clones are featured again in Retribution and The Final Chapter. In the fifth movie they are a plot device for actress Michelle Rodriguez to return, while in the last film they are a capital part of the story. Not only audiences are lead to believe that the Dr. Isaacs that we met in Resident Evil: Exctinction was a clone of the original, but also that there are many more running around. The original Isaacs, however, is actually an overpowered human, owner of half of the company and is awaiting underneath Raccoon City.

Not only that, but it is also revealed that there is one last clone of Alice out there…herself, since she is actually a copy of Alicia Markus, owner of the other half of the Umbrella Corporation.

The Final Chapter also brings the ultimate retcon of the story, since we are told that the T-Virus was discovered by Dr. James Marcus, who was looking for a cure to her daughter Alicia’s disease. The problem is, Apocalypse already introduced the creator of the T-Virus as Doctor Charles Ashford, who also developed the virus in order to cure her daughter Angela.

The writers simply hoped that four movies later no one would notice of this incongruence. And this new origin story does fit better with the overall arc of the movies.

Yes, 2016 was a crazy year for American politics, but Resident Evil: Retribution managed to envision a slightly more bizarre reality, with the Oval Office being occupied by none other thant Albert Wesker himself. This grotesque scenario was not really used beyond that shocking ending, but it sure served to give us yet another WTF moment.

Do you remember more shocking moments from the films? Share them with us in the comments below.