Here's how Let's Go can improve the series going forward. Pokemon Let’s Go Pikachu and Eevee may not be the fresh, new take on the series that some had hoped for. While fan reception has been solid, some were looking for a more hardcore experience in line with the main series from the Nintendo 3DS and previous handheld systems. Of course, that’s not what Let’s Go was trying to be, but on its way to acting as a bridge between Pokemon GO and the main series it added some cool new features and design elements that work even better. Here’s our list of top five things Pokemon Let’s Go does better than the main series…

OK, let’s get this out of the way first. I actually like that you don’t have to fight wild Pokemon to catch them. Or, at least, I prefer Pokemon Let’s Go’s method of catching to what we’ve had in the series so far. Having to battle every Pokemon you encounter just becomes tedious at times, and having this as an alternative has been nice. Now, with that said, I don’t think Let’s Go has the best/perfect catch mechanics. Instead I think a hybrid of the two methods would be optimal.

What I’d like to see in the series going forward would be that we encounter wild Pokemon and decide if this is one we want to catch. We mark that somehow within the game, such as checking a box or pressing a button. We then can fight it just like we used to, but without the fear of knocking the Pokemon out entirely. Now, I do like that there’s that restriction, but I’d prefer a bonus or catch boost if the Pokemon is damaged, but not defeated. Once we finish the fight, either by saying we are done or getting it to 0 HP, we shift to the catch mechanic of throwing a Poke Ball, with motion controls firmly as an option and not a requirement.

This…this needs to stay. Most JRPG series have shifted away from random battles over the last decade, but Pokemon has stuck to it until now. Let’s Go makes it so that Pokemon spawn in the tall grass, but you can see them and interact with them by choice, rather than popping up randomly and forcing you ti fight or flee. The time save here is immense, but it also just makes for a better game all around. The world feels more alive, and it’s genuinely fun walking through the tall grass and seeing what spawns, whereas before it was a stressful venture if you weren’t wanting to fight anything. 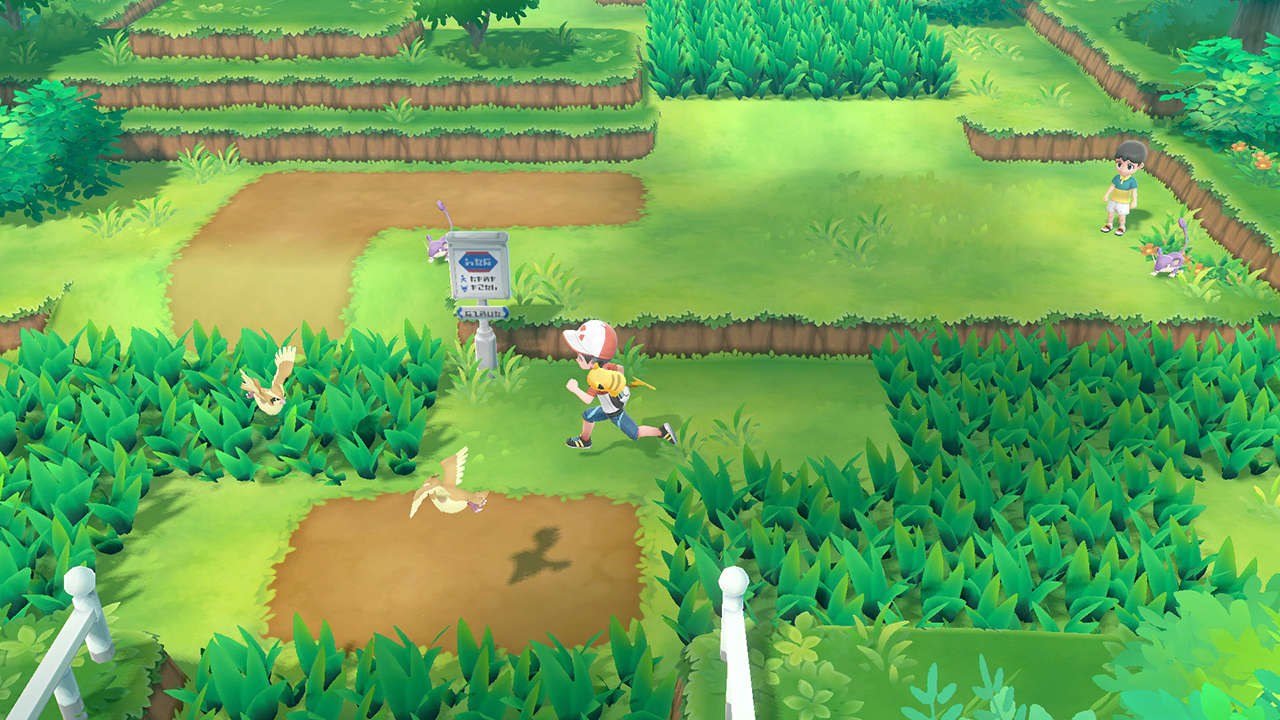 Once you catch those Pokemon they are transferred to your box like normal, except for one key difference. The Poke Box is now accessible anytime, anywhere. This may cause the game to be easier, letting you swap out injured or poorly typed Pokemon for the area, but man is it more fun and convenient. Every time I want to change out my Pokemon before I had to travel to the nearest Poke Center to heal and swap them out, but now it’s just a menu away. This is perfect for when you finally get that elusive creature you’ve been hunting for hours, letting you immediately add him to your party and move on with your adventure.

While the feature is pretty bare bones in Pokemon Let’s Go, it’s clear that two player co-op should be included in all games going forward. While Pokemon has appealed to older gamers since the beginning, the series is very clearly aimed at young children. Co-op allows parents or siblings to play together, joining in the fun and working together to become the very best, like noone ever was. Are you min/maxing your party to take on the Elite 4? Well having someone tag along gives them some part in the fun while actually boosting your ability to gain XP and catch new Pokemon. Are you just there to have fun and get through the story? A fellow player will only help.

The feature needs some work and should be more tightly integrated into the design. Perhaps trainers you encounter during co-op should toss out two Pokemon to fight, instead of just one. Catching difficulty should be raised a bit, with both players working together to raise their catch odds in some fashion. Either way, co-op had better be here to stay, cause it’s a huge benefit to Pokemon Let’s Go Pikachu and Eevee.

This isn’t totally new for Pokemon Let’s Go Pikachu and Eevee, but it’s good to see it return in such a big way. In Let’s Go you receive your starter and they are immediately set up differently to other Pokemon. They follow you around, along with other characters that you select, they climb on your shoulder, and they learn exclusive moves, including what used to be reserved for HMs. All of this is great, and simply having Pokemon follow you in the overworld is something fans love. Enhancing and improving this will make sure future entries keep players engaged with their Pokemon while crafting a more lively and enjoyable world to explore.