The latest expansion is easily Vermintide 2's best, and it's a riotous good time. 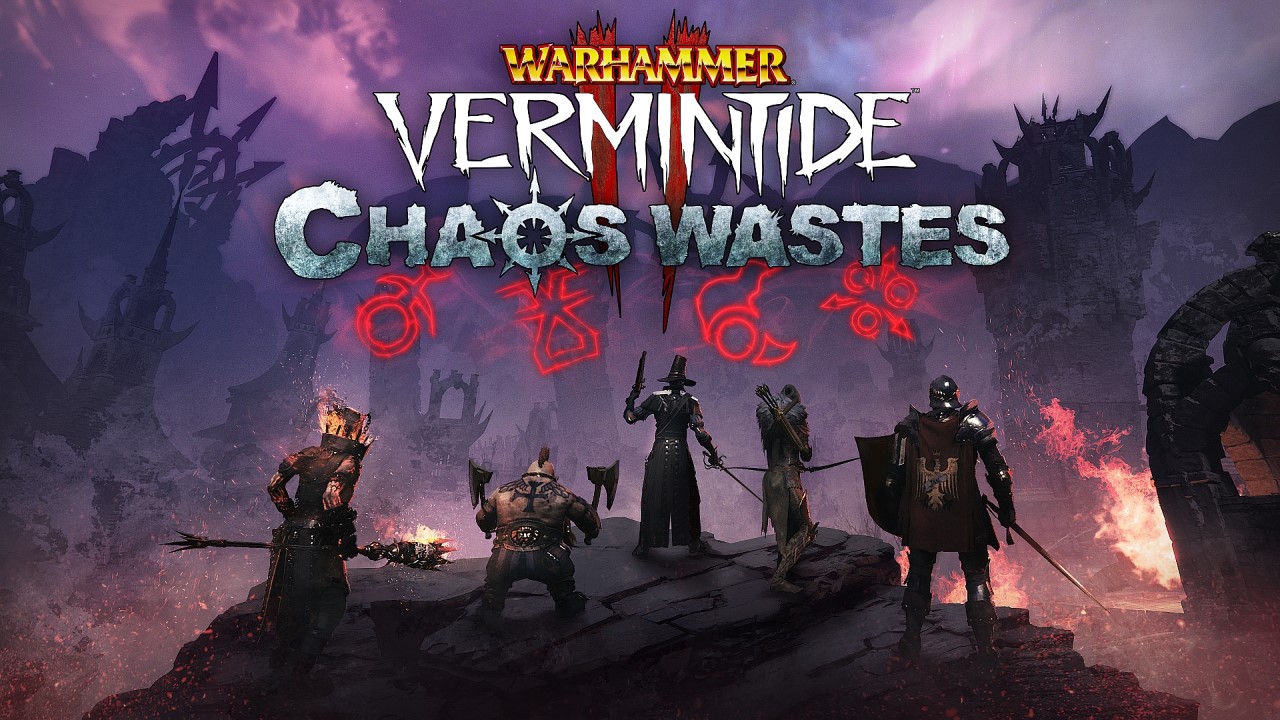 Fatshark’s Warhammer: Vermintide 2: Chaos Wastes expansion has thoroughly consumed my free time since it launched a few days ago. The free update is available to everyone who owns the base game on PC, with a console release slated to follow soon, and it is easily Fatshark’s best update yet. If future Vermintide 2 expansions are more inline with the quality and deployment of Chaos Wastes, as compared to the middling Winds of Winter, then I can’t wait to see what further adventures are in store for the Ubersreik Five.

Rogue-lites and rogue-likes have become pretty common in recent years, whether as standalone titles or as additional modes within already established games. The latter camp is perhaps where quality is the shakiest, and its here where Vermintide 2: Chaos Wastes finds itself. The base game itself can be boiled down as “Left 4 Dead, but set in the Warhammer Fantasy universe with an emphasis on excellent melee combat,” and it’s a mix that still works damn well today. But, taking that format and reframing it within the structure of a rogue-lite? Not an impossible task, but an easy one to screw up.

It doesn’t help that Chaos Wastes is following up the Winds of Magic expansion from 2019, which split the community both in opinion and within matchmaking. Whether you loved or hated the last Vermintide 2 expansion, it clearly drove a wedge down the center of the playerbase since you had to pay cash for it, queues aside. While Chaos Wastes has it’s own matchmaking, it being free to all is a clear course correction (though you’ll have to pay for the new weapons, which is a worthwhile trade-off).

Did the price tag of Winds of Magic create an unhealthy divide in the remaining player population? Alrighty then, Chaos Wastes is free to everyone with the base game. Were fans mixed on how Winds of Magic reshuffled the existing campaign in lieu of a bunch of new maps? Chaos Wastes features 15 new levels stitched together to form gruesomely beautiful new maps that are rarely the same per expedition. The fact that Chaos Wastes is already a more rewarding gameplay experience, at least on paper, than Winds of Magic sets it apart from its predecessor. One of the most substantial differences between the two is intent: Winds of Magic was intended to be a seasonal mode, so player progression was completely divorced from the rest of the game.

Chaos Wastes has its own version of progression during an expedition, sure, but characters bring over their existing levels and talents, and they continue to grow whether you succeed or fail. There are even Emperor Crates rewarded at the end of successful runs, ensuring Chaos Wastes feels like a meaningful alternative path upwards, rather than a novel diversion.

Granted, the progression system in Winds of Magic is arguably better than the regular ole’ Vermintide 2’s reliance on re-rolling stats over and over again, but it’s nice to be able to jump into a Chaos Wastes expedition knowing I’m going to get experience and loot that’ll carry over into regular missions. That said, Vermintide 2: Chaos Wastes does feature its own bespoke take on progression, and it works remarkably well. 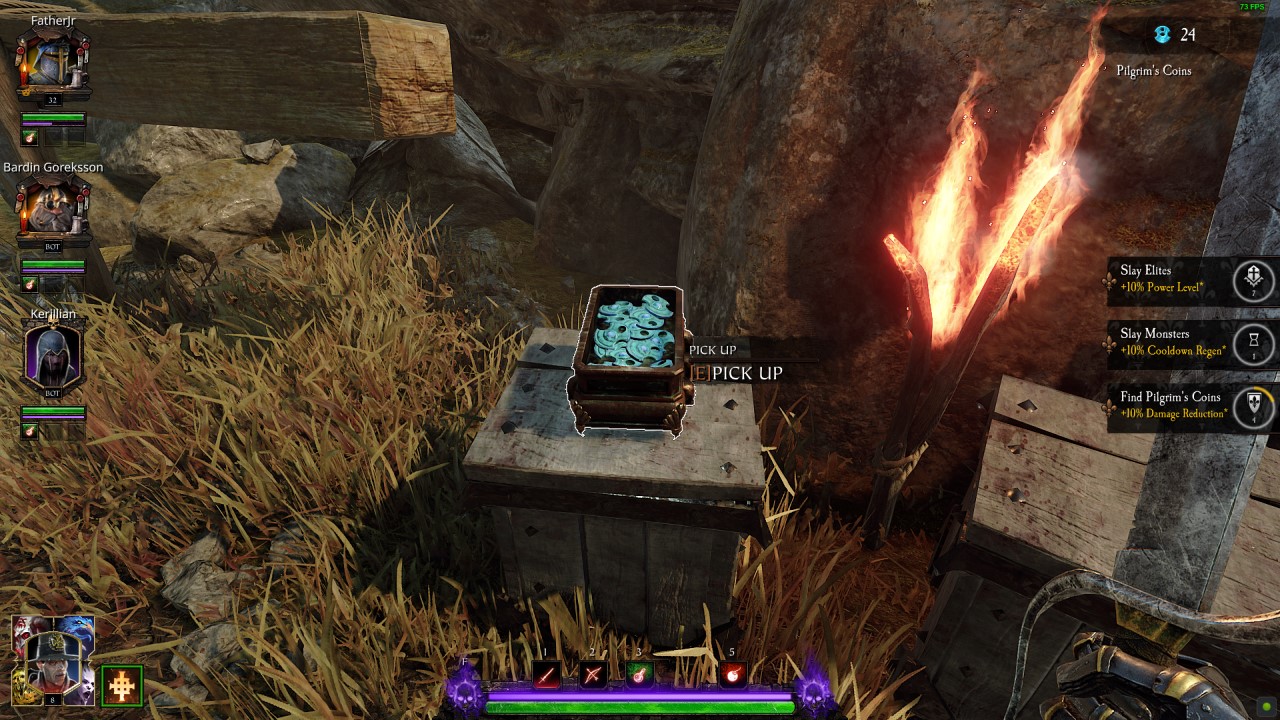 When you enter an expedition in Chaos Wastes you’ll be presented with a map containing zones that possess various modifiers to overcome and in exchange for a permanent buff, and friendly shrines with beneficial boons. You and your team will vote on the route you plan to take to reach the final arena (or the awesome Citadel of Eternity) at the end. Clear the final area to leave victorious, but if the entire party falls at any point you fail the entire expedition.

Only your talents and weapons from the base game carry over into an expedition, and those weapons will be reduced to “white” common quality. As you push your way through your selected zones you’ll scour the land for Pilgrim’s Coins, which can be redeemed at altars for either a random boon, or to enhance your weapons. These coins are looted for everyone, but are mercifully spent individually.

The concept here is simple: progression is tied to how well you balance spending your Pilgrim’s Coins. Boons confer a variety of buffs and, like the best rogue-lites, some combinations are straight-up broken (in a good way). Boons are pricey, however, and randomly selected when purchased within a level. You can hoard Pilgrim’s Coins for the shrines that can be reached on the map, which offer up a selection of curated boons based on the type of shrine, but you’ll miss out on upgrading your weapons which are the sole source of traditional power and properties in Chaos Wastes. 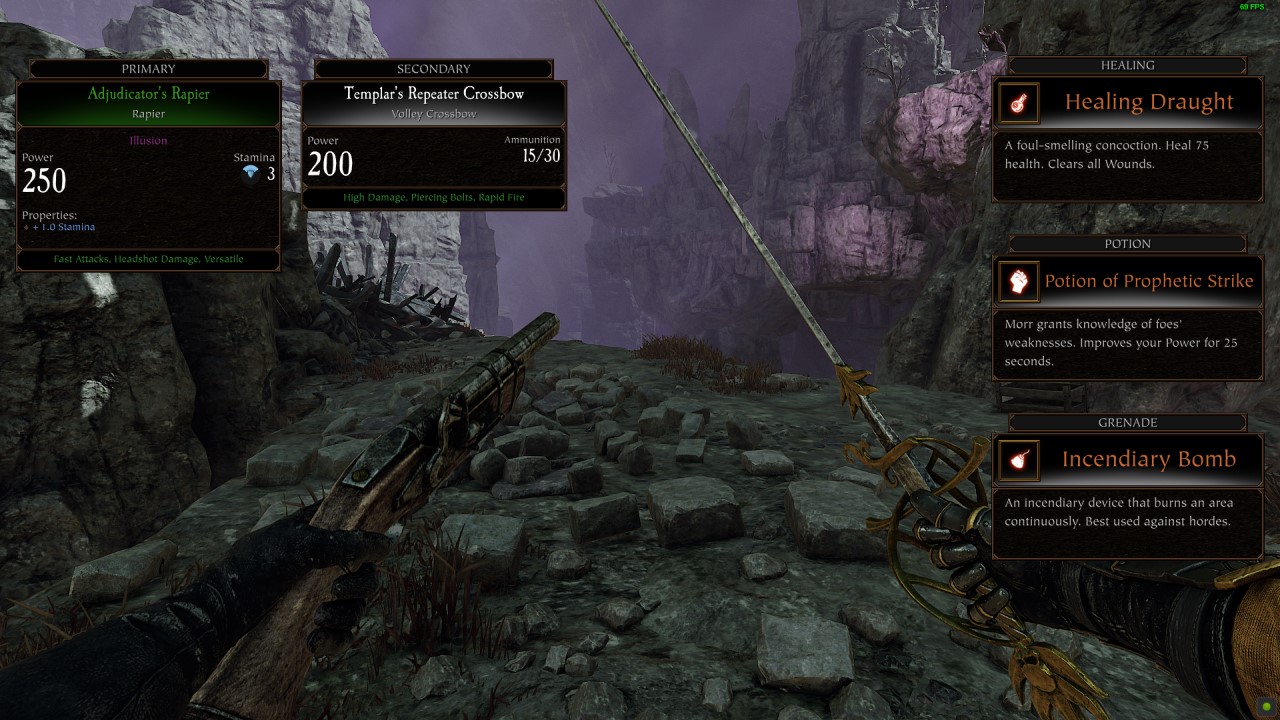 Weapon upgrading isn’t as expensive as boons (at least at the start), but you may not find an altar capable of upgrading your exact weapon. Often, you’ll find an altar that will up the rarity and power, but will swap your weapon out for a different one. These are cheaper than “tempering” your existing weapons, so even if you like what you have it may economically make more sense to roll the die. Thankfully, you can skip rarities if you’re feeling brave, going from common to exotic, for example, in one jump, but you will struggle to keep up since higher rarity altars appear in later zones.

Mix in the unique Chaos Wastes exclusive potions that offer up some crazy buffs (like infinite bombs for a short duration), and you’ll easily find yourself running around like a god amongst mortals during your best runs. No two expeditions are the same, partly due to the upgrades and crazy combination of boons you’ll grab, and also thanks to how the levels snap together in different combinations between expeditions, lending Chaos Wastes that perfect “just one more run” vibe good rogue-lites rely on. 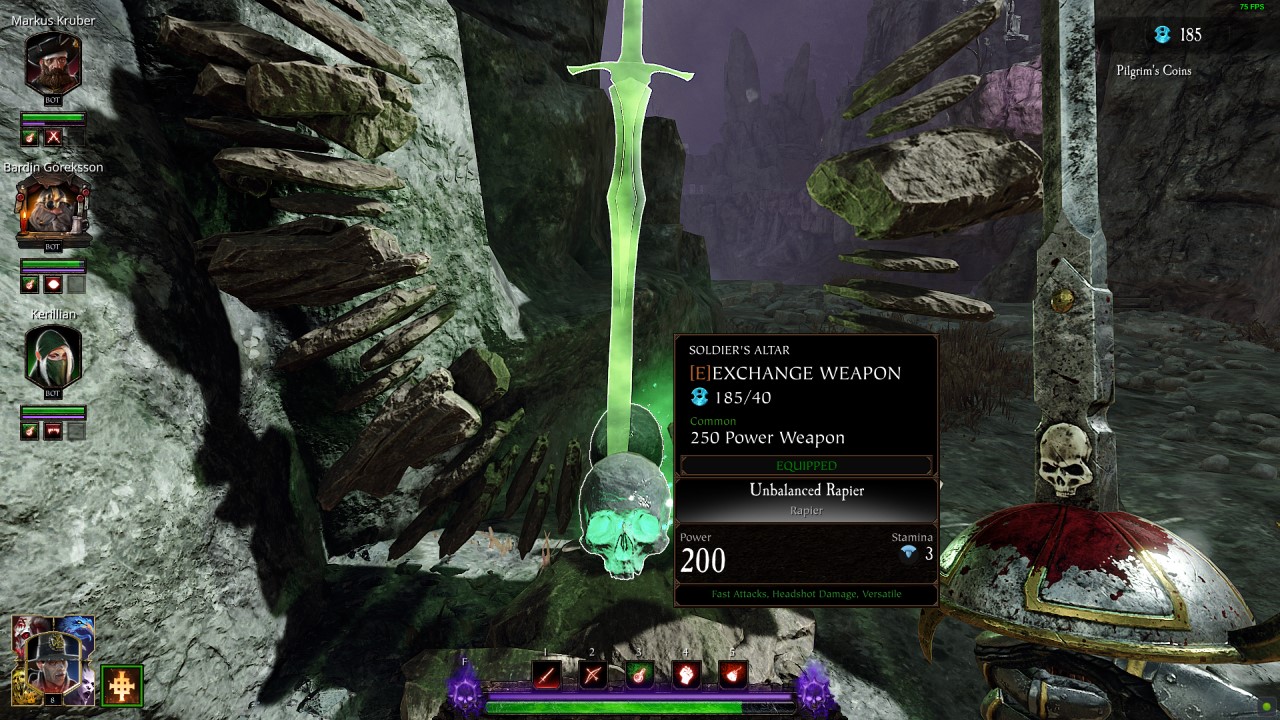 If there’s one bit about the latest Vermintide 2 expansion that I found disappointing it was the lack of a new enemy race. In Winds of Magic we got the Beastmen, and in Chaos Wastes, well, we get nothing. This is particularly odd considering the four Chaos Gods play a large role in the expansion, cursing some zones and making your run much harder in general. Even a palette swap for the existing enemies, like the Chaos Warriors, would have been appreciated, because right now it looks like Nurgle is the only Chaos God with any actual supporters in Vermintide 2.

That gripe aside, Vermintide 2: Chaos Wastes is a genuinely excellent rogue-lite addition to Fatshark’s cooperative melee rat-murder simulator. If anything, it has me even more excited for their upcoming Warhammer 40,000: Darktide, which Chaos Wastes is likely acting as a low-key beta test for. The fact that Chaos Wastes is entirely free makes it easy to recommend to both players new to Vermintide 2, and those returning after a long recess. 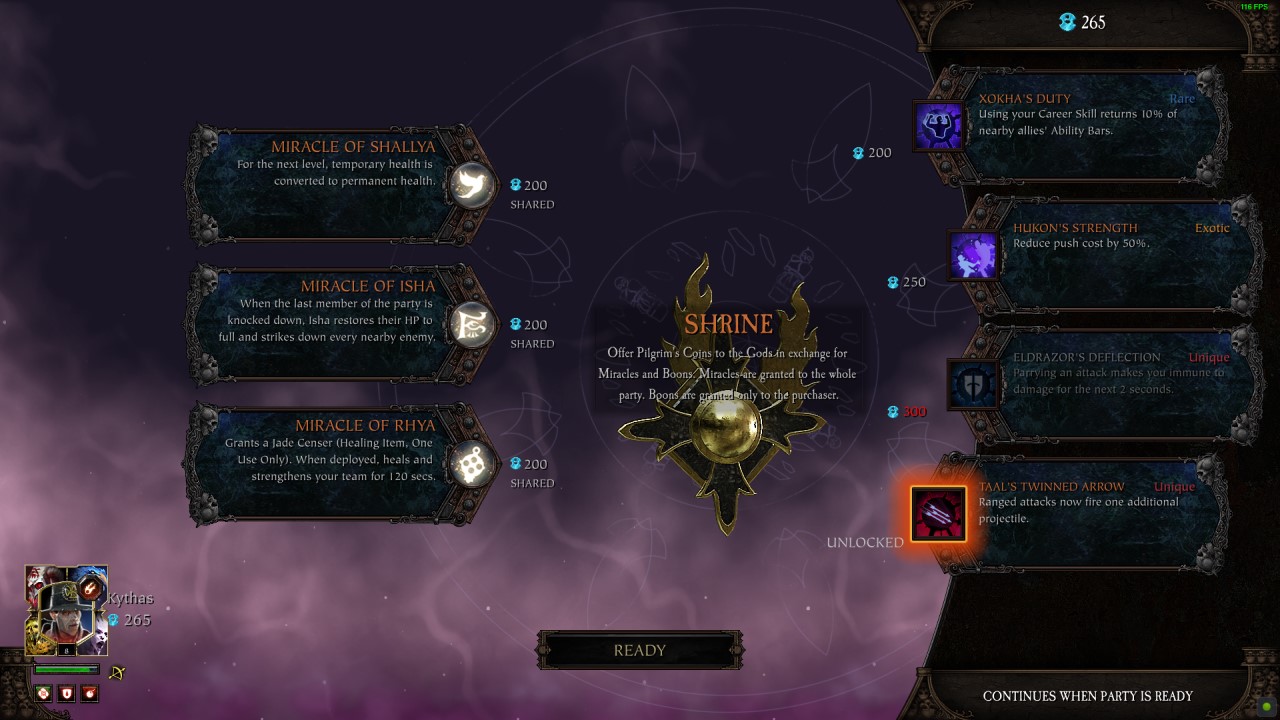 The daily concurrent active players for Vermintide 2 on Steam has been steadily risen since Chaos Wastes launched, and I’ve had no issues finding a like-minded party (despite being in an area of the world where I should be having issues). Give this expansion a go: it’s a righteous good time, and a substantial improvement over Winds of Magic. It seems the playerbase on PC is largely in agreement, so hopefully it comes to console soon.