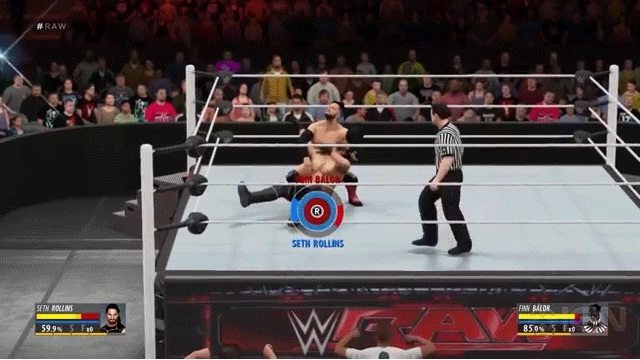 Many gamers have had a chance to play WWE 2K16 already. The one feature that seems to be dividing owners of the game is the introduction of the new submission system.

In our own review we explained how the new submission system worked. It’s basically rotating the analog stick around where you have to match the red color with the blue color. If you are on the defensive, you have to rotate the stick so the two colors don’t mix.

This is a system that was used in UFC Undisputed 3 and it worked in that game. However, many WWE 2K16 gamers cannot seem to get the grasp with this new system. Some people seem to tap out in seconds while others cannot win matches with submissions.

If you look on social media such as Facebook, Twitter or the 2K Forums, there are lots of people that hate the new submission system. On the other hand, there are a few people out that say you just need to practice it to get a hang of it.

The new submission system has the same type of polarizing that John Cena has. A sizable number of people hate the new system and thinks it’s really flawed. Some others welcome the change and prefer it over the the button mashing technique implemented in the older games.

After playing the game for the past week or so, I still find the submission system to be hard to grasp. I did a match where I was Bret Hart facing off against Zack Ryder. I wanted to make him submit using the sharpshooter.

I did everything that I should have been doing, but getting him to tap out was really hard. I even beat him up so badly, his legs were all red. Even then, this did not slow down the A.I.’s blue segment from rotating faster than my red segment.

I even pressed the left trigger for the boost. This helped out a little bit, but he still didn’t tap out. I ended up just pinning him and ending the match.

The funny thing is that my brother seems to have already learnt the submission system already. He was Bret Hart facing off against Stone Cold Steve Austin. He was able to make him submit easily.

This is the reason why this new submission system is so polarizing. Some people (like my brother) have picked up on the new system already. Whereas people like myself cannot seem to do anything.

It remains to be seen if 2K Games will release a future patch for WWE 2K16 to address those struggling with the submission system. It will be interesting if they decide to keep it in for WWE 2K17, or they revert back to the old button mashing system instead.