Skipping out on this franchise should be a violation of the Prime Directive. 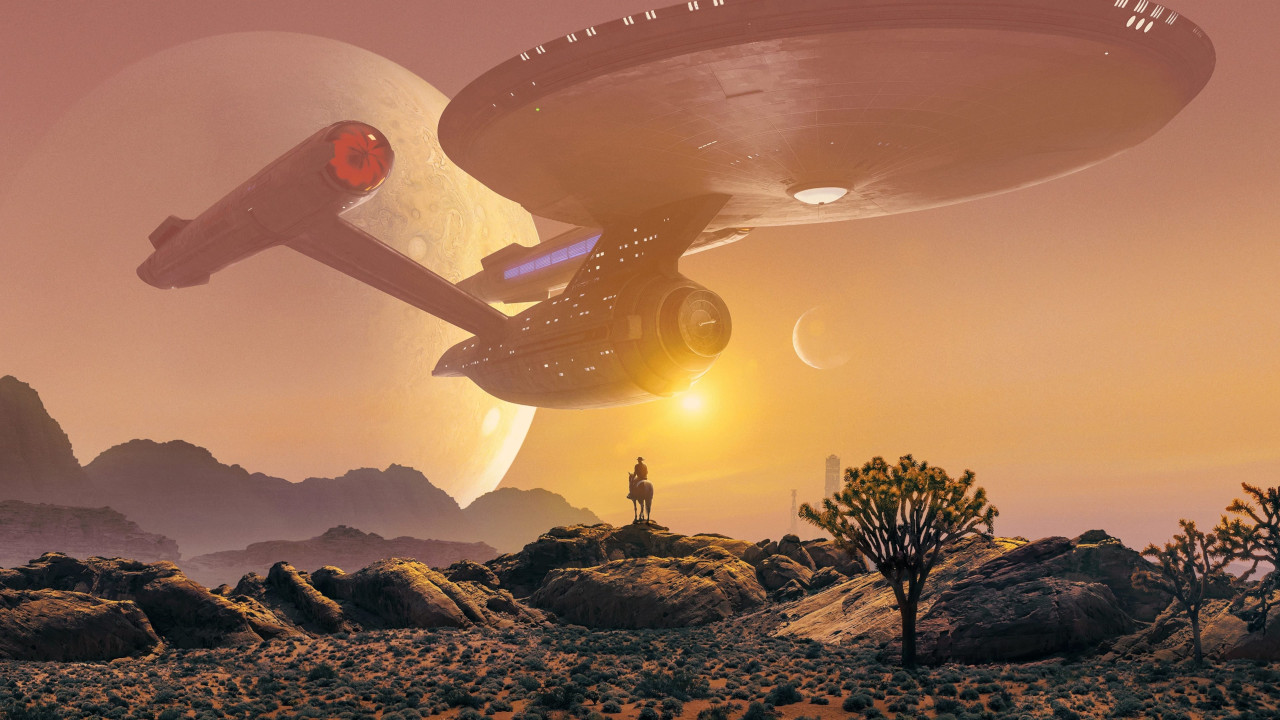 Star Trek has changed a lot in the 50 years it’s been on TV with shows, films, books, video games, and other media. It’s one of the most iconic multimedia franchises ever conceived and possibly the most essential sci-fi property in all of popular culture. It’s a daunting task for newcomers to such a massive series, but it’s also one where you can confidently say “there’s a Trek for everyone.”

There is ultimately no truly wrong choice in what series you choose, although some are certainly more appealing to certain audiences. But the best Star Trek shows are often ones that are thrilling science fiction storytelling with memorable characters and uplifting, progressive themes fitting its original concept.

All Star Trek Shows, Ranked from Good to the Best

Please note that we don’t see any Star Trek shows as innately bad in any way, for the sake of this ranking. While some certainly blow fans away and others might disappoint, they’re still worthwhile entertainment even if they occasionally might have some forgettable episodes. It’s certainly a less uneven territory than the Star Trek films, but the best shows are ones about which the fans are exceedingly passionate or excited to watch. We have them listed below:

This show was the product of Star Trek: The Original Series having been canceled, yet remaining incredibly relevant in syndication. In light of the original show’s popularity, creator Gene Roddenberry decided to bring back much of the cast for this animated series.

While the show is surprisingly cinematic at times, it’s hard to get past the static and limited animation, a feature that’s hard to look past when it’s also supposed to be this show’s hook. Viewers found it to be well-written though, and it’s still worthwhile, even if it was stricken from the canon.

Star Trek: Prodigy is a decent show, and an important push toward kids and younger audiences in general for the franchise. While this might be the case, it’s highly enjoyable for viewers of all ages and has plenty of references to engage returning fans of the franchise. But it never quite truly grasps at the higher limits of quality that other Star Trek shows have done.

That being said, it’s wonderfully entertaining in its own right, and for fans of Voyager, the sight of Kate Mulgrew’s CG-animated hologram Janeway is a welcome one.

Enterprise had a lot going for it, with plenty of improved production value over any show before it. Features that drew the series back from greatness and stood the test of time among other Star Trek shows included a less interesting lead/captain, Jonathan Archer, and its bizarre sexualization of female characters.

It also didn’t help that the show had the worst opening theme. But the series was a fascinating prequel to the Star Trek we know and love, and felt like an authentic portrayal of humans entering the galactic stage to interact with new species, and start first contact with many new worlds.

Short Treks is an important series but naturally limited by its concept of being something greater within the Star Trek expanded universe. It’s a series of short episodes, never reaching or exceeding 20 minutes in length, where only certain key characters are featured. It’s more of a companion series to shows like Star Trek: Discovery and Strange New Worlds, but the stories it features are great showcases of characters otherwise given less focus in their ensemble casts.

Voyager was an excellent series that aired alongside Deep Space Nine but with one key difference: Voyager turned out to have a greater gender balance on the show. Star Trek has always existed to shatter barriers on television, and one of the greatest achievements this show managed was to have its first female captain, Kathryn Janeway, not only be such a hit with fans but exuding empowerment along with the rest of the female cast.

It doesn’t hurt that the entire cast has compelling narratives, with multiple characters including Jeri Ryan’s Seven of Nine featuring in later shows as well. It also had an episode featuring a younger Dwayne Johnson, although he didn’t manage to change the hierarchy of power in this universe, either.

Picard seems like a conceptual slam dunk, and while it looks and feels awesome to watch, the first season didn’t quite grip viewers as much. That being said, it features the return of Patrick Stewart as Jean-Luc Picard, who left his status as Starfleet admiral due to his disillusionment with the United Federation of Planets’ lack of aid provided to the displaced Romulans whose home was destroyed. The show features fantastic action, effects, and production value, along with some powerful themes on display.

One of the greatest aspects of this show includes Picard’s heartbreaking loss of Data, an android who served as a lieutenant commander on the Enterprise. The recurring use of the song Blue Skies as a reminder of their bond, and Data’s humanity, conveys Picard’s anguish over his friend’s death. It helps that so many of the other The Next Generation cast have made appearances, with even more on the way when season 3 premieres on February 26, 2023.

Want a dose of Rick and Morty energy in your Star Trek shows? Then maybe this show is for you. Lower Decks is not only a breath of fresh air with its irreverent, mature humor, but it’s also a nice change of scenery in how it still looks and feels like a part of Star Trek canon. It doesn’t hurt that The Boys’ Jack Quaid is in the voice cast along with Tawny Newsome, Fred Tatasciore, and Jerry O’Connell.

The premise is simple: they’re on a Starfleet vessel, as military and exploration personnel like in any other show, but the focus is shifted to the low-ranking officers and their antics aboard the USS Cerritos. It’s fast-paced, it’s goofy, and yet it feels very much like a Star Trek show perhaps should when taken in this direction. But it’s a welcome addition, taking place in the late 24th century, 2 years after the events of Voyager.

Much like Picard, Discovery was a Star Trek show that showcased some incredible leaps in production value and looked visually stunning. It was also immediately, immensely popular, with its status as a streaming series that resulted in notable growth for CBS All Access (now Paramount Plus) largely being a reason for its renewal. The series and the shows that spawned after it heavily resembles the aesthetic and feel of the Star Trek movies from recent years, also known as the Kelvin Timeline.

But Discovery is a fascinating sci-fi series in its own right, with a strong ensemble cast behind it. Aside from the talented Sonequa Martin-Green, whose beloved role as Michael Burnham allowed her to transition into Trek from her tenure on The Walking Dead, the show features some other key talent. Jason Isaacs, whom you might recall having longer, blonde locks as Lucius Malfoy in Harry Potter, graces the screen in this show.

Discovery also features the incredibly talented Doug Jones, donning some of the industry’s best makeup and prosthetics as Saru since episode 1, which was released the same year that he won the hearts of moviegoers for his starring role in The Shape of Water.

This series made all other entries on this list possible. This show was campy at worst, and iconic at best, with fantastic storytelling and unforgettable achievements within. This show not only launched the franchise, but the careers of many of its stars, and serves as an optimistic beacon from the 20th century to remind humanity of its bright potential, even with consideration for how big and intimidating the galaxy may be.

Space: the final frontier. These are the voyages of the starship Enterprise. Its five-year mission: to explore strange new worlds, to seek out new life and new civilizations, to boldly go where no man has gone before.

Star Trek was always about exploration and breaking down barriers. The series is distinctly anti-war and anti-racism, even having the honor of featuring the first interracial kiss on television. While aspects of the show and its storytelling may have aged poorly, it has maintained massive appeal for the majority of its contributions, and it laid the basis on which all other Star Trek shows after it followed, to some extent.

3. Star Trek: The Next Generation

This is the natural favorite for many Star Trek viewers because it embodies the core experience of the series, which makes sense since it was created by Gene Roddenberry before his death. More so, however, the series was able to push forward into new storytelling territory, expanding the universe of the franchise like never before, with fun characters and deadly enemies alike. It also earns the distinction of winning the most Emmy awards out of any Star Trek series.

Deep Space Nine, Voyager, and several films were directly spawned by this show’s success, and it launched the mainstream careers of many of its cast for years to come. In particular, Patrick Stewart’s portrayal as Jean-Luc Picard ranks among the greatest out of any iconic Star Trek captains, being the favorite of countless fans.

Strange New Worlds is an incredible surprise, being the best new Star Trek in over 20 years. It only took one season for it to become an object of fascination for not only its optimism like in the old Star Trek shows but its idealism. Its star, Anson Mount, portrays Captain Christopher Pike with empathy and poise, striving to do good for the planets and people he encounters despite being troubled by a horrifying premonition revealing his imminent death.

This will be a welcome sight for fans of Mount after he departs from the MCU, or at least for now. People can also reasonably argue that he is among the best captains in all of Star Trek, if not at least having the best hair. Strange New Worlds is gorgeous, thoughtful, and a potent reminder of what Star Trek is trying to remind us about humanity’s positive potential, and the underrated power of possibility.

Deep Space Nine is fascinating for several reasons. It is perhaps the greatest deviation while still ostensibly traditional. The show features a crew of Federation humans and aliens cooperating, but instead of being on an exploratory vessel, it’s on a space station this time around.

But the other deviation is that this series not only deals in heavier and darker themes as well as spirituality, but it also has the most fascinating, layered Commander-turned-Captain in the entire franchise, and a fantastic cast of characters. Does it get weirdly angsty with its high-school-level drama between Odo and Major Kira? Sure. Does it also veer into horrifying territory where war crimes are committed for fiendishly pragmatic tactical purposes in the show’s best episode, “In the Pale Moonlight?” You betcha.

It’s in this complicated series that we see an evolution of what Star Trek can be, wielding that same power of possibility to see the franchise from all angles. For those who may disagree with how highly this show places on our list, in the words of Captain Sisko, you “will learn to live with it.”

Star Trek is a series that will retain its relevance for likely many decades to follow, if not indefinitely. It is prescient, loaded with political commentary, and is surprisingly touching, brimming with optimism and potential. There’s a Trek for everyone, and with any luck, this will hold true with every future addition.

More on Attack of the Fanboy :
star trek