Horizon: Zero Dawn Guide: Which Skills Should You Unlock First?

The latest news in the world of video games at Attack of the Fanboy
February 27th, 2017 by Dean James 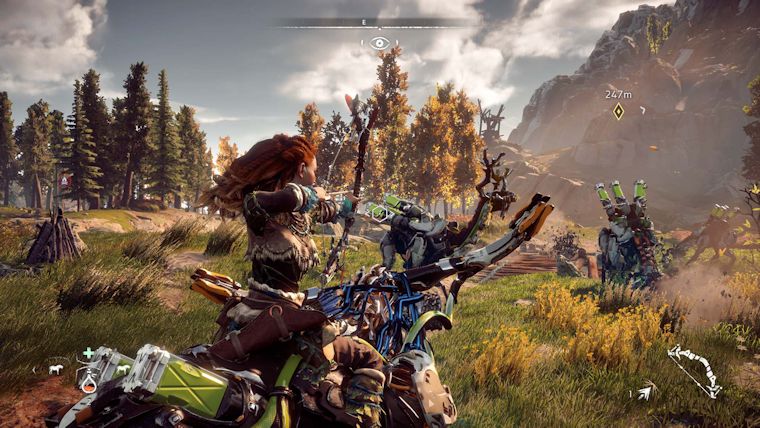 Horizon: Zero Dawn is far from an easy game, as it can get quite difficult as you advance through the game. Leveling up can help by itself, but the skills that you can then start to unlock can really help even more so. We’ve already given you a rundown of the skills available in the game in another guide, but this time our focus is on the most important skills that you should look at first and foremost.

As mentioned in the other guide, there are 36 total skills to unlock in Horizon: Zero Dawn, with four tiers that cost 1, 2, 3, and 3, points respectively for those found there. You will need 81 total points to get all skills unlocked, but that will obviously take quite awhile.

From the point of the game where you gain access to your skills, it’s not a bad idea to go ahead and select all of the tier one skills, just because they only require 1 skill point each and branch off from there. However, the first one you will want to unlock is Concentration without question. This allows you to slow down time by pressing R3, similar to the Dead Eye technique in Red Dead Redemption. Critical Hit is also nice, as it can be used on the stronger enemies when you knock them down for extra damage.

Another very important one here is Gatherer, which will give you additional natural resources early on. This helps with crafting ammo and such, though it may lead to you getting a full bag before you can upgrade your pouch. Any of the techniques that help you be more stealthy, such as Silent Strike and Silent Drop are very useful as well.

After the initial skills, there are some specific skill trees that you should probably try to go after. The next one I would go for is Heavy Lifter, even though it’s not really as useful. Instead, we are just unlocking it so that we can gain access to the skills after, which are Concentration+ and Fast Reload, which will greatly help you in combat. Critical Hit+ is also quite useful, as it just makes those specials attacks stronger.

For those that plan on utilizing the override ability, which lets you take control of most machines in the game, you might want to go ahead and do the tier 1 skill Lure Call and pick Combat Override and Combat Override+, which increase the time a machine stays overridden by 50% and indefinitely respectively.

One of the most important tier four skills you will want pretty early is Tinker, which allows you to remove Weapon Coils and Outfit Weaves and then be able to reuse them. Normally, you have to completely replace these and will lose them entirely, but getting this will prevent that. To get it, you will have to get Gatherer for 1, Scavenger for 2, and then Disarm Traps for 3. All of these are useful skills, but the main goal is to get Tinker. You can also go on the other path and get Ammo Crafter and Scavenger+ as for more resources.

Other than these, the rest of the skills are really more up to you in how you want to handle them. Some tier four skills like Call Mount+, which allows you to call a overridden mount if you don’t currently have one, are useful, but they aren’t imperative early for your success. Just make sure you read over each of the available skills in Horizon: Zero Dawn. before making any decisions and you should be good.