How To Forge And Upgrade Equipment in Monster Hunter: World

The latest news in the world of video games at Attack of the Fanboy
January 29th, 2018 by Jelani James 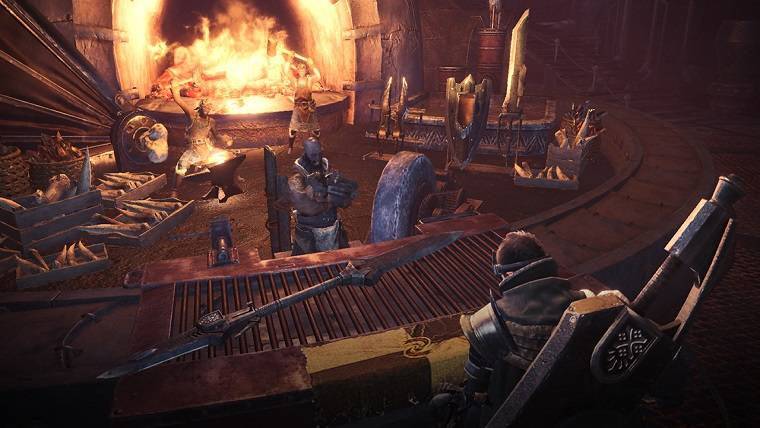 One of the hallmarks of the Monster Hunter series is forging and upgrading equipment and Monster Hunter: World is no different, featuring a Smithy who will provide both services for a small fee and many, many monster parts.

Neither process is terribly complicated, but they’re something you’ll need to spend much of your time doing in this game so its best to learn about them early on.

Here’s what you need to know about forging and upgrading in Monster Hunter: World: 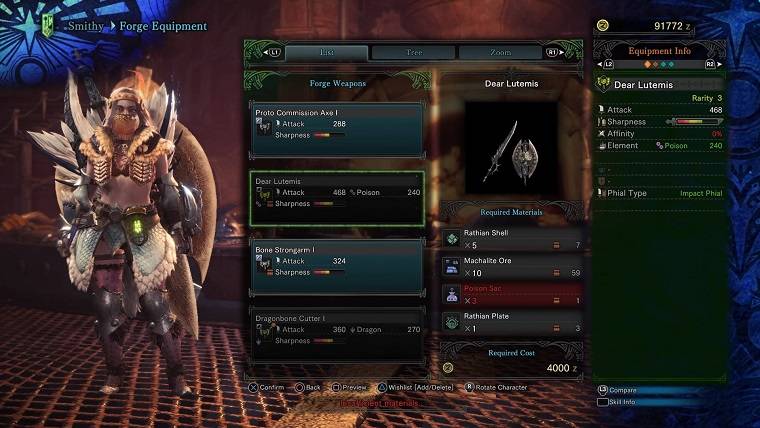 After selecting this option and choosing the type of weapon (Great Sword, Charge Blade, etc.) you want to make, you’ll be shown a series of weapons that can be crafted, along with their stats, required materials and cost. At the start of the game, only Ore and Bone-based weaponry will be shown, but a wider variety will be revealed as you progress through the game and fight more monsters.

You’ll notice if you move to the right that there are actually MANY different weapons you can create, requiring anything from the parts of the Great Jagras to the Zorah Magdalos. One would assume that you would be to forge any of them provided you had the materials, but that isn’t actually the case. Rather, the only way to obtain most of these weapons is by upgrading them (more on this later). The process of forging armor is identical to that of forging weaponry, only requiring enough materials and money to get your desired item. And just like with weapons, you can see all of its relevant stats (armor rating, skills, etc.), prior to making it. You can even press the appropriate button to learn more about the skill and set bonus skill (assuming it has one).

Unlike weapons, however, you don’t have to worry about trees here. As such, you don’t need to worry about making multiple pieces of weaker armor just to make a stronger one. Simply collect the required materials and you’re good to go. 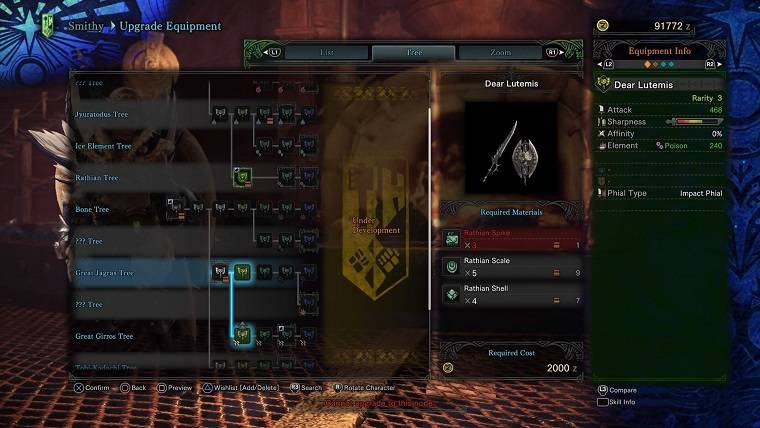 Remember when I mentioned weapon trees back in the forging section? This is where upgrading comes into play. Relying on base weaponry can only get you so far, so you’ll eventually need to upgrade pre-owned weapons if you want to actually do meaningful damage later on.

To start, all you have to do is find the weapon you wish to upgrade and see if any of its potential upgrades are actually available. You’ll only be able to upgrade to a higher tier on the same tree at the start (e.g. Ore I to Ore II), but the amount of upgrades available to them will quickly increase as you come across more enemies. For example, as indicated in the picture above, the Dear Lutemis Charge Blade on the Rathian Tree requires a Mudslide Blade I on the Jyuratodus Tree, which in turn requires a Proto Commission Axe II on the Ore Tree.

It’s a simple enough concept to understand, but it gets time consuming when you want multiple elemental weapons. Going back to the previous example, the Ore Tree can eventually lead to Rathsblade I on the Rathian Tree and Everfrost Blade I on the Legiana Tree, so if you wanted to get every possible final tier weapon connected to the Ore Tree, you would have to forge and upgrade the Proto Commission Axe I four times (you start with one in your inventory).

Theoretically, you could skip much of this hassle by straight up forging higher tier weapons (assuming its an available option), but as you can see with the Dear Lutemis, doing so requires rarer materials. 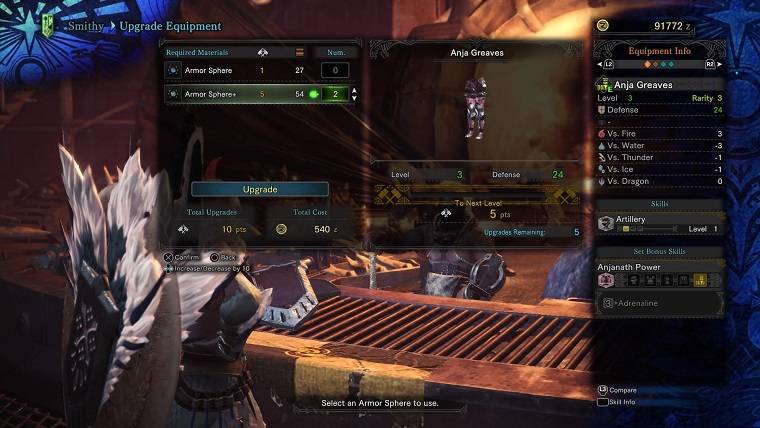 Unlike weapons, upgrading armor is incredibly easy. Each piece of armor has a level which can be increased by feeding it armor spheres. As it rises in level, the amount of defense it offers will increase, but the amount of spheres needed to reach the next level will increase along with it. Fortunately, spheres are easy to get, as they’re the reward for doing bounty quests — something that you should be doing at all times.

As such, all you need is your desired piece of armor, at least one type of armor sphere and some money, and you’re good to go.

— You can add any weapon or armor that catches your fancy to a Wish List which keeps note of how much progress you’ve made towards creating them. Whenever you collect the appropriate material, the game will not only tell you that you have, but how many more you need.

— It’s possible to get a refund on upgraded weapons, allowing you to get your materials back in case you want them for armor or anything else. Just be aware that this isn’t possible in all instances and the game will give you a disclaimer every time such instances occur.

That’s all there is to know about forging and upgrading. It’s not a terribly complicated process, but its one that you will have to engage in repeatedly during your time in Monster Hunter: World, so getting acquainted with it early is the best way to go. Happy Hunting!

Home / Game Guides / How To Forge And Upgrade Equipment in Monster Hunter: World