Find the right edition for your needs and budget. Like any proper big-budget video game these days, The Elder Scrolls Online: Greymoor has several different editions for sale. What does each one come with? What’s the difference between a “standard” edition and an “upgrade” edition? Below I’ll break down what’s in each of Greymoor’s bundles, and hopefully help you find the right one for your budget.

The Elder Scrolls Online: Greymoor can be broken into two categories.

Let’s start with this, shall we? At this junction most people know what a Collector’s Edition is, whether it is physical or digital. I’ll share what’s in Greymoor’s further down, but for now let’s clarify what’s different about the Upgrade and Standard editions of the expansion.

The “Greymoor Upgrade” is the cheapest option on the table at $40, and in theory the most tempting. There’s one issue with it however: you need to own the base Elder Scrolls Online game to purchase and use it. Thus the “Upgrade” moniker. This is the case regardless of what platform you plan to play The Elder Scrolls Online on. It does bear mentioning you don’t need the other previous expansions, only the original base game. It typically goes for $20 USD, yet at that price you’ll be better off buying the Standard Edition if you are entirely new to the game. Here’s why:

The Standard Edition of Greymoor is $60, and comes with the base game and all the previous expansions. Morrowind has been bundled with the base game for a while now, but Summerset and Elsweyr still run for $20 to $30 each when not on sale. If you were to buy the base game needed to play any of this content on its own at $20, then the Greymoor Upgrade Edition for $40, your total would come out to the same $60 as the Standard Edition, but without Summerset or Elsweyr. New players who are only here for Greymoor are still better off grabbing this edition of the game, instead of trying to acquire each portion piecemeal later down the road.

That said, returning players will want to run with the Upgrade Edition, unless they’re lacking those aforementioned chapters bundled in the Standard: it’s the cheapest way to grab whatever you are missing. In theory, an ESO+ subscription will net you access to all previous expansions (ESO adds the out-of-date expansions to its subscription service, and for purchase within the in-game microtransaction Crown store), but you’ll likely spend more on the sub than you would on the Standard Edition in the long-run while playing catch up.

If you own damn near none of the additional content (expansions, story/zone DLCS, and dungeon DLCs) outside the base game then ESO+ is a decent way to play it all without shelling out a few hundred bucks, but if all you care about are the expansions then grab the Standard Edition. That said, if you don’t give a skeever’s tail about any of the previous expansion and are only here for Greymoor then the Upgrade will serve you well. The veterans in the crowd probably own and/or have played everything up to this point, so you’ll want to purchase the Upgrade Edition (unless you never owned the previous expansions in the first place and would like to – then knock yourself out with the Standard Edition).

As a final reminder: if you are playing on PC you have to buy the Upgrade for correct client. I.E. if you own the base game on Steam you need to buy the Upgrade on Steam. If you own it through Bethesda’s store buy it from their store. You catch my drift: make sure you match-up. 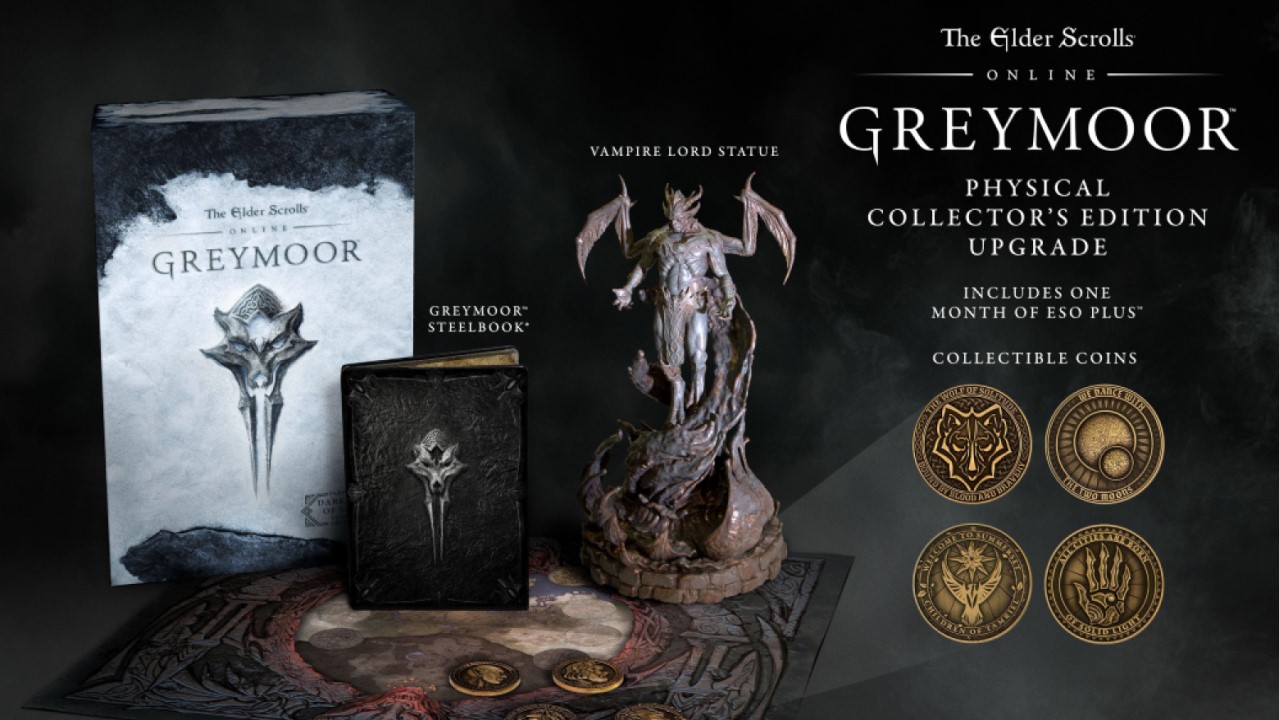 The Digital Collector’s Edition has the same items, but the Physical has a few extra goodies.

Both the Standard and Upgrade Editions have a Digital Collector’s Edition that bumps the price up $10 ($50 for the Upgrade CE, and $70 for the Standard CE). It comes with the same digital goodies regardless of which version it’s attached to, and those items are:

Yes, one of those emotes involves an arrow to the knee. For those of you with a disposable income and a deep love for the game there’s a Physical Collector’s Edition for Greymoor. It’s $130, and only comes with the Greymoor expansion (so, it’s no different from the Upgrade Edition on that front). Included with the Physical CE are:

If you are reading this in time to still pre-order Greymoor you’ll net a couple extra goodies as well, no matter what version of the game you pre-order. These are:

The mount can be used immediately after pre-ordering, but you have to wait for launch to grab the rest. Considering this article went live after the PC launch, but before the console launch: I’d advise console players to wait on feedback from the PC crowd before pre-ordering. It’s your money, but you don’t have to give Bethesda or Zenimax your cash sight-unseen in this case.

There you have it: every edition of the game broken down to the most granular of levels. Personally, I believe the Upgrade and Standard Editions are more than enough for most players, but if you have the cash to burn and love The Elder Scrolls Online the $10 premium for the digital goodies isn’t all that bad. Now, go forth and save Western Skyrim – whenever the servers come back up, that is.