World War Z – How to Level Weapons, How to Unlock Prestige Weapons

Upgrade your arsenal to better quell the zombie threat. 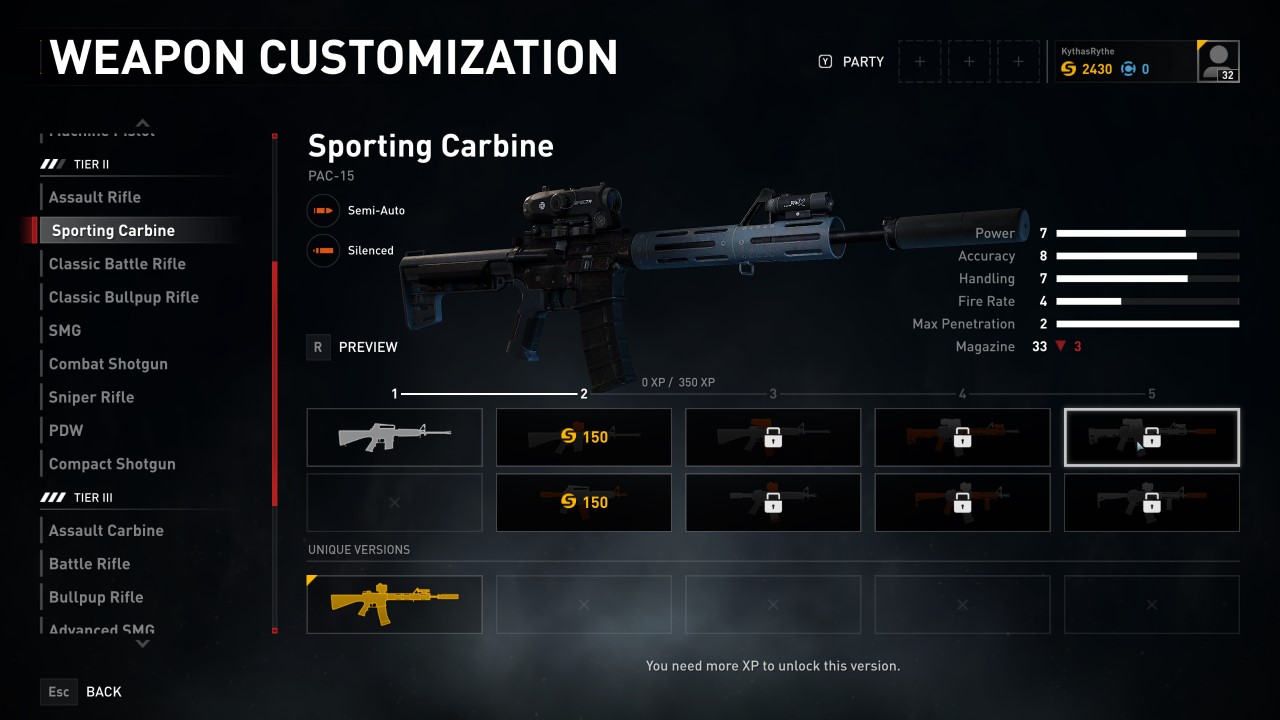 World War Z has twenty-one standard weapons scattered about for players to use in combating the zombie hordes, and each can be leveled and upgraded. Leveling them isn’t all too difficult, but there is some nuance to how they are upgraded.

Using a weapon during missions in World War Z will level it, but upgrades will cost Supplies.

Leveling a weapon in World War Z is a simple affair: just equip the weapon and kill zombies with it. At the end of the mission you’ll see how much experience you have gained for all the weapons you used, with one minor exception. Weapons that have reached their next level will stop leveling until you buy one of the upgrades associated with that level. This isn’t too terrible, except weapon upgrades cost Supplies (the general “yellow” currency earned from playing the game).

Each upgrade level balloons in price, with the level 3 Scout Rifle upgrades costing 750 Supplies alone. When you are trying to juggle class perks with weapon upgrades you can easily find yourself struggling to keep up. The trick here is simple: find a weapon you like and focus on it. Upgrading your favorite class’s starter weapon a couple tiers is a smart move, because you’ll start with more power out of the gate, but eventually you’ll want to find a tier 2 or tier 3 weapon to focus on. That said, look at your class’s perks and see what format of weapon they favor. Upgrading automatic rifles as a Fixer, for example, is a bit of a waste because their late-game perks favor semi-automatic rifles.

If you need to earn more Supplies you can do so in a handful of ways. The “easiest” method is to crank up the difficulty. The harder the fight the more rewards at the end. Even if you fail a mission in World War Z you will take home some Supplies based on how far you made it, so dialing up the difficulty won’t be a waste if your team struggles to cross the finish line. Multiplayer also rewards Supplies, if you need a break from PvE. Challenge Mode has a Supplies reward, but you’ll be beyond Scrap grinding once you’re able to clear this hurdle.

Personally, I prefer a different method: Horde Mode. Horde Mode rewards a dizzying amount of Supplies if you can press beyond ten waves (and, frankly, it’s a blast to play). At Normal difficulty it’s not hard to reach Wave 20, which will net you well over two-thousand Supplies for the effort. Just be sure to reach at least rank 5 on your preferred class before jumping in (the perks make a world of difference).

There are also DLC weapons available if you bought the Season Pass or the GOTY Edition. These are more than cosmetic skins: they are fully upgraded killing machines. Use these when able if you want to level a weapon, and don’t mind the immediate boost to performance. Do bear in mind the leveling limitation still applies, so you will need to purchase upgrades to continue leveling these weapons. That said, these DLC upgrades are usually equal to or better than the top-level upgrades, so you’re best served spending the Supplies on other weapons that don’t have DLC upgrades to better round out your arsenal.

Finally, there are prestige weapons each class can unlock. To do so you need to prestige twice, or reach prestige rank 2. These weapons typically come with a unique perk of their own that fits that class’s role, and are worth grabbing. The white, locked weapons are the prestige weapons, so find the one for your favorite class and see if it’s worth the effort. Prestige costs a massive amount of Supplies (to both reset and to re-earn your perks) without factoring in the weapon cost, so these weapons should be viewed as late-game pursuits.