Legend of Zelda: Twilight Princess HD Guide – How to Fish 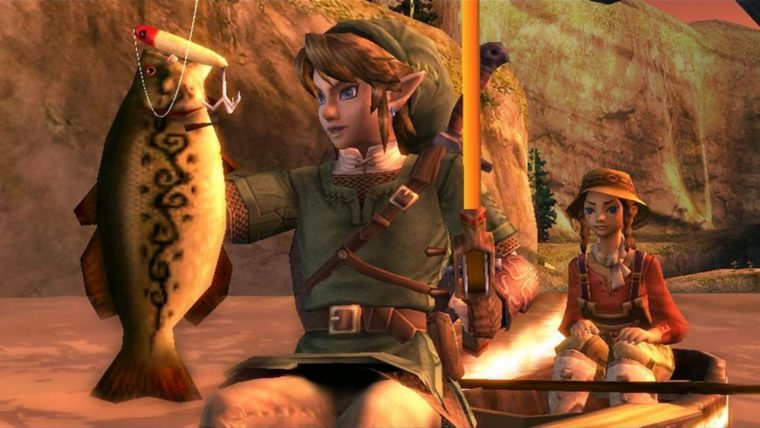 Fishing has been a favorite part of Zelda games ever since it was first introduced. The Legend of Zelda: Twilight Princess HD has a fairly robust fishing system, as the original game did, and players might have trouble understanding its intricacies at first. While we won’t be going totally in-depth into how to catch the biggest and best fish, we wanted to give you some tips to getting started, and give a general overview of how to fish in The Legend of Zelda: Twilight Princess HD.

First off, you have to get your fishing rod. To do this, check out our starting guide for Ordon Village, which will help walk you through it. After that you can pretty much fish anywhere there is a decent amount of water, though the big fishing hole comes later in the game.

During Twilight Princess HD’s Lake Hylia quest line, where you find the Tears of Light and restore the river and lake to its former glory, you’ll find the best fishing spot in the game. You have to pay to enter, but doing so gets you a boat to paddle around to different parts of the lake, you can also rent a new rod here…more on that later. Whether you’re in the actual fishing area, or outside near some water, location will influence what types and size of fish you catch, so try to mess with it to find the spot that works best for you. I usually little alcoves that have logs and waterfalls and other places for fish to congregate.

Once you find the right spot just equip your fishing rod by dragging it on the Gamepad onto one of your action buttons.  Point Link where you want your bobber to go and hit that button to cast. You’ll then want to be patient, watching the bobber float in the water. A fish will eventually come up to it and bite, but be sure that he takes the whole bobber down into the water before hitting the button again, otherwise you’ll just scare him away.

If your timing was right you’ll have a fish on the hook. Hold down the button for the fishing rod to reel him in, moving Link’s arm with the left analog stick to pull the fish from side to side. If he’s swimming right, you want to pull him left, and vice versa. This might take a while for the bigger fish, so just be patient, and keep reeling them in. Once they reach you Link will pull them out of the water and you’ll have a nice, shiny new fish.

Now, some tips on catching bigger and better fish. The Legend of Zelda: Twilight Princess HD has a bunch of different options for fishing. You can just toss the hook in, as described above, but it won’t really get the attention of the fish you want. Instead, you’ll need to use bait to attract them. This can come in many forms, such as bee larva. Throw whatever bait you want onto the hook and do the same thing as above and you should start getting those gigantic fish in no time.

Now, if you choose to rent a fishing rod from the fishing hole attendant then you have a whole bunch of other options. The type of lure you pick can influence what fish you catch, and you need to pay attention to the seasons in the fishing hole. All four seasons are represented, and they move forward each time you exit and enter the area. Weather also gets worse throughout the day, so hit it early to get that ultra clear water.

The ultimate goal, if you’re looking to become a true fishing master, is to obtain the sinking lure, which will get you the best fish in all of Twilight Princess HD. Make sure you don’t hire a guide to go along with you if you plan to use it though, as it isn’t really allowed to be used. To get it you need to catch every type of fish, then use your regular bobber fishing pole on the dock in the fishing hole. Hopefully this guide helps you with that first part, but let us know in the comments if you have any questions.