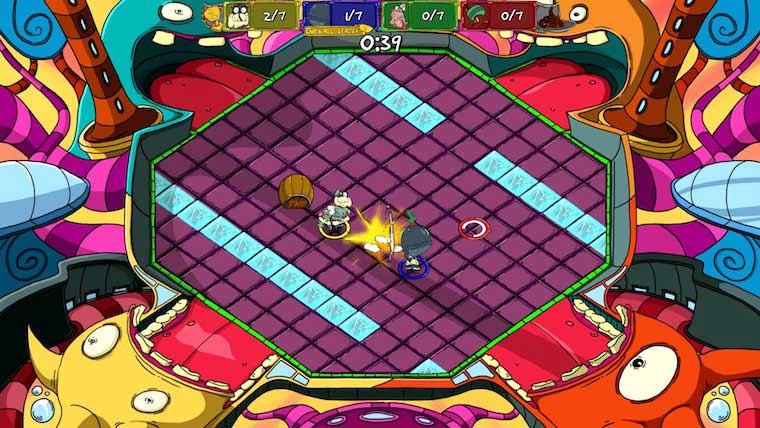 YamaYama, the world’s only party game where every playable character comes equipped with a fat suit that pushes other characters away when activated, is now available for PlayStation 4 after more than a year of being a PC exclusive.

If you’ve never heard of YamaYama, no one could blame you. The game was created by the small, independent developer Lumenox and it’s a strange game. In the PlayStation blog post announcing the game’s release on PS4, Art Director Agust Freyr starts the post off by explaining that one of the game’s six playable characters is an old man named Susan who wears a chicken suit and has no arms. He then goes on to describe a couple of the game modes. “You have to hitch a ride on a flying pancake that is being driven by a bee. Then there’s the one where you have to save a penguin before it gets shot on a rocket into space while the other players try to stop you. The list goes on.”

In total, there are 24 different game modes in YamaYama. Basically, the game is like Mario Party, but with only a bunch of mini-games and no board game in between. The goal is to win as many games as possible to receive as many points as possible. Simple enough. The main difference from Mario Party, however (besides the blatant absurdity of the visuals), is that each player can continue to play in each game mode after they’ve been defeated. They don’t get to keep playing the game itself, but rather they become like a ghost and can lay traps for players still in the game, getting revenge from beyond the grave. The game is designed for two to four players, but can also be played by one player playing against one to three CPU players.