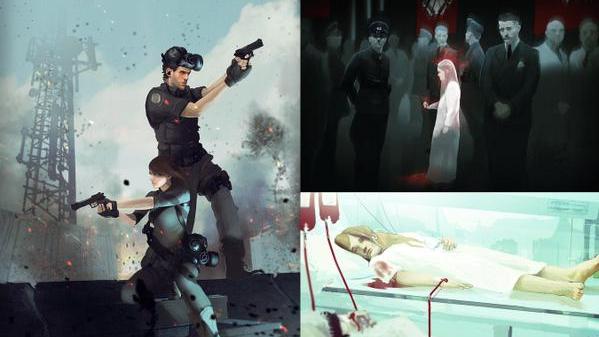 The Creative Assembly (developer for Alien Isolation) apparently pitched to develop Resident Evil 7 among many other games as revealed by a concept artist.

As uncovered by NeoGAF, a Creative Assembly concept artist (Brad Wright) has uploaded many images on his personal website . The image you see above is the developer’s vision for Resident Evil 7. It’s probably likely Capcom denied their pitch for the game since we haven’t heard about a 7th game in the franchise being developed yet.

It wasn’t just Resident Evil 7 either. There were a lot of cancelled games and/or pitches made by The Creative Assembly as well. One of them includes a game on Django Unchained, another game on the Bourne franchise, and something Marvel related.

It would have been interesting to see a Django Unchained video game. It’s been five years since Red Dead Redemption came out and gamers are craving for another epic Western title.

It’s not surprising the Bourne game got cancelled. The Bourne Conspiracy video game that came out in 2008 was average at best. Not to mention it lacked to get Matt Damon or any other actors from the trilogy to use their likeness.

It’s also sad to see how Marvel isn’t doing much in the AAA video game market. Marvel movies are killing it at the Box Office, but there is no proper video game starring Marvel characters in console/PC gaming apart from the LEGO ones.