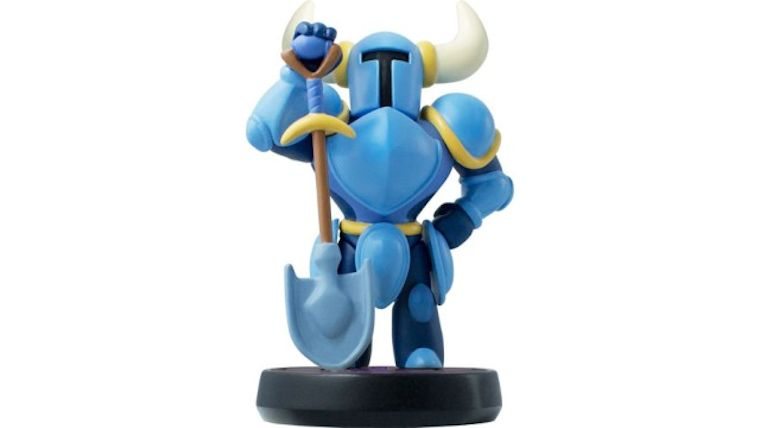 The month of December was a little reprieve for amiibo collectors but now January is here and more amiibo are coming. Two weeks from now will have a number of amiibo releases, but today, Friday, January 8 has a new amiibo, which happens to be the first of its kind and sounds like could be very hard to find in-store and that means it is time for yet another amiibo Hunting Guide.

Shovel Knight first debuted back in 2013 on the Wii U, 3DS, and PC, before jumping to other consoles later, including physical releases on many platforms. This connection with Nintendo platforms for Yacht Club’s Shovel Knight made the announcement of a Shovel Knight amiibo seem like a perfect fit.

To date, all of the amiibo that have been released have come straight from Nintendo across lines like Super Smash Bros. and Super Mario Bros. The Super Smash Bros. line had some third party characters, but they were still released by Nintendo. Instead, the Shovel Knight amiibo was manufactured through Yacht Club games, who said that supplies would be really good, but looking at launch stocks, it appears that Shovel Knight could be very hard to acquire in-store today.

Before getting to in-store details, Shovel Knight has been up for online pre-orders at a few stores. Amazon put up Shovel Knight last week for a little while, but he didn’t last long, almost making it seem like he was put up earlier than expected. He was put up yesterday once again for a little longer, but he is now sold out. He has also been up on Best Buy’s website, but he didn’t last too long on there either. That means you may need to find him in-store today, unless he goes up again on these two sites or on others.

Walmart hasn’t had any confirmations on getting the Shovel Knight amiibo in-store, but it’s always possible you could check there already, since most Walmart stores are 24 hours. After Walmart, the next store that will be opening is Target, who is confirmed to be getting Shovel Knight amiibo. In fact, some stores got him in early and had him on the shelves, but were register locked and couldn’t be sold.

The bad thing is that Target is not expected to get a very large quantity of Shovel Knight amiibo day one. According to reports on the amiibo subreddit, Target stores are expected to get only 2 in low volume stores, with 10 on average and a max of probably 12-16 in really busy locations. You can look up your stock through BrickSeek using the DCPI 207-03-4051. My area is not looking good, with only 2 or even 0 in some locations, with only one even in the 150 mile radius getting 10. If you want one at Target, I highly recommend going very early this morning and lining up, unless your area somehow gets more.

Unless you are in the midwest and can try a store like Fred Meyers or Meijer, your other options should each open at 10 am with Toys R Us, Best Buy, and GameStop. Sadly, it sounds like those stores will be getting similar stock to Target, with as low as 2 and possibly up to 10, so if you can’t get to a Target to lineup this morning, one of these three stores might be your best bet with a little later opening.

Overall, it sounds like Shovel Knight is going to be like going back to the Wave 3 and 4 days with day one stock, but the good news is that Yacht Club Games says they are going to be be making enough stock for the Shovel Knight amiibo so that anybody that wants one can get one eventually.

As always, good luck with getting Shovel Knight and let us know what kind of luck you have in the comments below, including where you got him. Also stay tuned for the bigger amiibo release in two weeks, where we will have yet another amiibo guide.