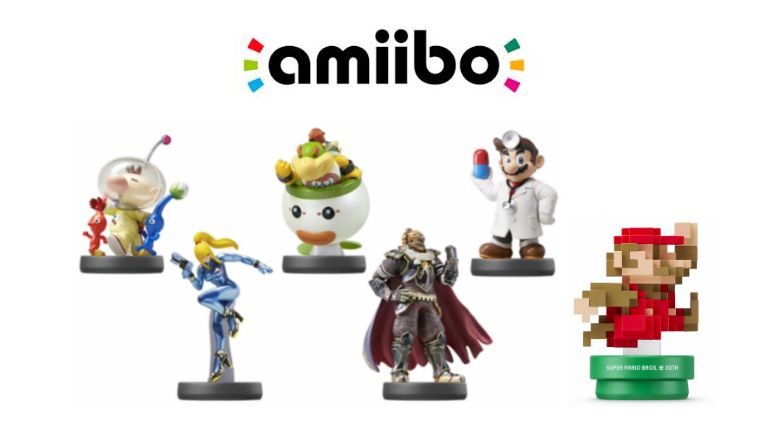 We’ve been in a little bit of an amiibo lull the last few months, with only two actual releases coming since May with Palutena and Dark Pit, which became known as Wave 5A. The next few months are going to be full of different amiibo releases and tomorrow is the start of that with not only Wave 5B for the Super Smash Bros. line, but something extra, so that means it is time for yet another amiibo Hunting Guide.

September’s amiibo releases were once looking very insane, with the initial reveal that 11 different amiibo would be releasing in the month. Luckily, the Mii Fighter 3-pack was moved back to November and the Retro 3-pack isn’t coming until later in the month.

That leaves us with five new amiibo arriving tomorrow in the Super Smash Bros. line, as well as the 30th Anniversary 8-Bit Mario. The new Super Smash Bros. amiibo specifically are Ganondorf, Olimar, Zero Suit Samus, Dr. Mario, and Bowser Jr. The 30th Anniversary Classic Colors 8-Bit Mario is also releasing by itself, with the Modern Colors 8-Bit Mario being exclusive to a Walmart Wii U console bundle for now, so we won’t even talk about that one too much.

With reports coming out about stocks at the different retailers, we will talk about the best options and go from there. First of all, we do have two retailer exclusives this time, with Dr. Mario exclusive to Target and Bowser Jr. exclusive to Toys R Us, so we have to take that into consideration.

Starting at midnight later tonight, technically an amiibo retailer that could be checked is Walmart. Reports say that the aforementioned Mario Maker console bundle with the Modern Colors 8-Bit Mario is already in some stores, but we haven’t gotten any news of if stores will get stock of anything otherwise. This is the true wildcard as it may be helpful for those that work in the morning, but I definitely wouldn’t be counting on them.

More definitively, we know that Target, Toys R Us, GameStop, and Best Buy will be getting stock of Wave 5B and the Classic Colors 8-Bit Mario in-store. Considering Target opens first, usually at 8 am, we will start there, especially with them having an exclusive.

The big attraction at Target is obviously going to be Dr. Mario, with reports that he may be the best stocked exclusive at Target yet. The numbers reports on Reddit have the lowest volume stores still expecting around 24 while some of the major stores are getting up to 132, but the average is is more in the 40-56 range reportedly. The other three non-exclusives and the 8-Bit Mario are more in the range of 4-8 it sounds like, though Zero Suit Samus might be on the higher end, so those will likely go fast, especially with ads saying a limit of two of each amiibo. This could always range on your location, as many made it a limit of two period with Wave 4, so be careful of this.

The next three options all come a few hours later, with each typically opening at 10 am. Toys R Us is going to be the most popular, due to their exclusive Bowser Jr., but they might just be the best option overall for you as well. Reports say that the average numbers of Bowser Jr. will be 32-48, though highest volume stores could be over 100, seemingly being on par or better than the number of Greninja last wave. Oddly, while Zero Suit Samus is reported to possibly have more available at Target, Ganondorf is supposedly the more well stocked at Toys R Us, with an average of 12-16, while ZSS and Olimar are more in the 8-16 range, though these could be lower or higher obviously. 8-Bit Mario totals aren’t known as well, though they should be around those more than likely.

Our last two in-store options are Best Buy and GameStop, which are seemingly pretty on par with one another, with Best Buy possibly having more, due to less locations. GameStop sounds like they will have at least four of Ganondorf, ZSS, Olimar, and 8-Bit Mario, with upwards of 12. Best Buy is said to have at least eight of the Smash Bros. amiibo, but possibly only four of the 8-Bit Mario.

If you fail to acquire all of your needed amiibo at this retailers, you have one other option, Amazon. We told you yesterday about their plans they revealed, which is once against a staggered plan for the three non-exclusives and 8-Bit Mario. Starting at 1 pm PT, you can order Ganondorf, with Zero Suit Samus, Olimar, and Classic Colors 8-Bit Mario coming at 2 pm, 3 pm, and 4 pm respectively. Certainly do not count on these being available for the entire hour following, as they will likely sell out in no time, though they are saying stock will be better than Robin and Lucina from Wave 4 that sold out in seconds.

Stock definitely seem to have improved all around this wave from the last, with no one being as bad as Robin and Lucina, but you’re still going to have to line up to get them all likely. Some will definitely be camping out for awhile at some locations, but you’ll really have to gauge past outings in your area to know for sure how early you need to go.

Hopefully this helps you survive the latest barrage of amiibo with a successful haul of your favorites. Good luck out there and make sure to let us know what you got and any interesting camping out experiences in the comments below.