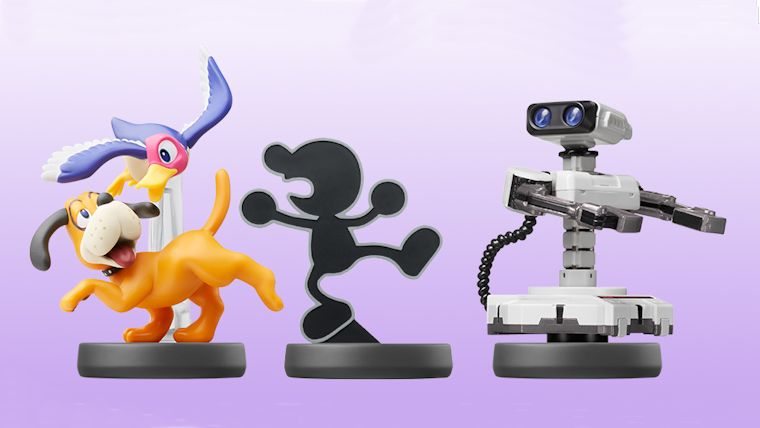 September has already had one major release of amiibo back on September 11, but that is not all for this month. We have the release today of a special three-pack of exclusive amiibo to one retailer, as well as something completely new, which we will both cover in our Amiibo Hunting Guide for September 25.

Back in late July, after the Dark Pit release, we got rumors of pre-orders for what was called the Retro 3-pack at GameStop, which we later learned would be an exclusive to them. That 3-pack includes ROB, Game & Watch, and Duck Hunt.

This actually might be one of the most successful amiibo sets to come out, as GameStop had a ton of pre-orders for these available back on that weekend. They then went up online and in-store pre-orders were extended, with the online Retro 3-pack of amiibo staying up for weeks at a time, making it almost impossible not to have the option to order it if you wanted.

That seems to make the 3-pack one of the easiest to get so far, which makes today not so hard, except for those that somehow missed out. These three are supposedly not going to be sold outside of this bundle, at least in the near future, so this was the only way to get them.

If you did not manage to snag a pre-order for what some have donned the Retrio, you might have a chance in store at GameStop, but there’s also a good chance there won’t be any leftovers. Most reports over the last few days had stores getting maybe two extra, which depending on your area and if everyone already pre-ordered it, you may get lucky and be able to get one.

Just make sure you go pick up your Retro 3-pack pre-orders today or tomorrow or that pre-order will be sold, so checking Sunday at opening may also be an option for those that missed out and can’t get one in store today.

The other new release this week are the brand new Animal Crossing amiibo cards, which are releasing alongside the new 3DS game Animal Crossing: Happy Home Designer. These cards are sold in booster packs, similar to your typical trading card game, with a retail price of $5.99 per pack, or $6.99 at Toys R Us. These packs come with 6 cards, so you are essentially paying $1 per card at most retailers.

The availability of these really will depend on your area and if your stores are doing restrictions. Online orders have been restricted, but not all stores will be doing so, so people can buy a whole box. Unlike with amiibo figures, which are obviously being scalped when a bunch of the same one are bought, these are random draws, like Magic The Gathering or Pokemon cards, so you will need a lot to hopefully collect them all.

Personally, my GameStop right after opening seemed to have a full box, which consists of 18 packs. These are a lot harder to judge than the figures and them likely being handled different, but I wouldn’t count on there being an excess of these, at least at launch.

That is all for a few weeks, with our next standalone amiibo launch coming in mid-October alongside Yoshi’s Woolly World, though Chibi-Robo is also coming out as part of the bundle a week prior.