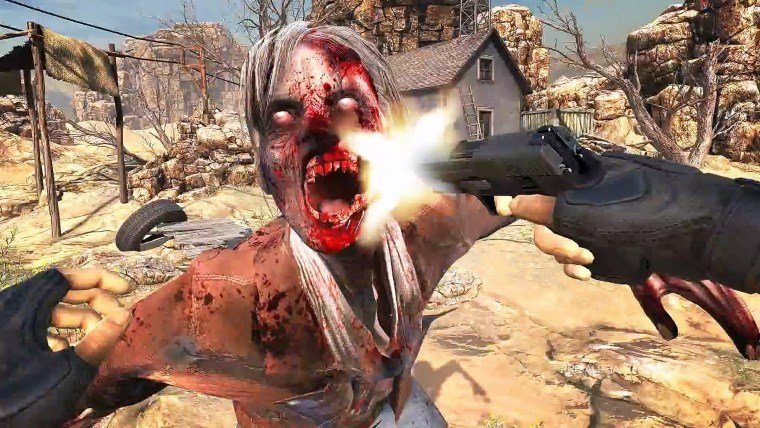 One of VR’s best games is coming to PSVR on June 27th. Arizona Sunshine, the zombie survival game will arrive for the PlayStation platform later this month, bringing its signature style of VR gaming. The new release will feature a brand new game mode that takes advantage of the PSVR Aim controller, which arrived alongside Farpoint last month.

Arizona Sunshine on PSVR allows for a few ways to play, such as teleportation or free movement via a controller. The Aim controller adds a new level of immersion to an already pretty immersive experience, and players can use it throughout the game, if they want.

“Built from the ground up for VR, Arizona Sunshine is a full-feature game that puts you in the middle of a zombie apocalypse as if you were there,” reads the game’s description. “Explore post-apocalyptic southwestern America in a desperate search for human contact in campaign mode, join forces with a friend in co-op multiplayer, or jump into the endless multiplayer Horde mode for up to 4 players.

“Experience unprecedented VR realism with physics and particle systems provide next-level zombie mutilation, object destruction and an array of environmental effects. Step in the midst of a zombie apocalypse as if you were really there, freely move around and explore a post-apocalyptic world, and handle motion-controlled weapons with real-life movements – putting the undead back to rest is more thrilling and satisfying than ever before”

PSVR has been a big success for Sony, with the console manufacturer unable to keep the headsets in stock through the holiday season. Over a million PSVR headsets have been sold so far. The games have varied in quality though, with many feeling like a tech demo. This has been true of VR gaming in general, but Arizona Sunshine is often held up as an example of VR gaming done right.