The latest news in the world of video games at Attack of the Fanboy
June 22nd, 2015 by William Schwartz 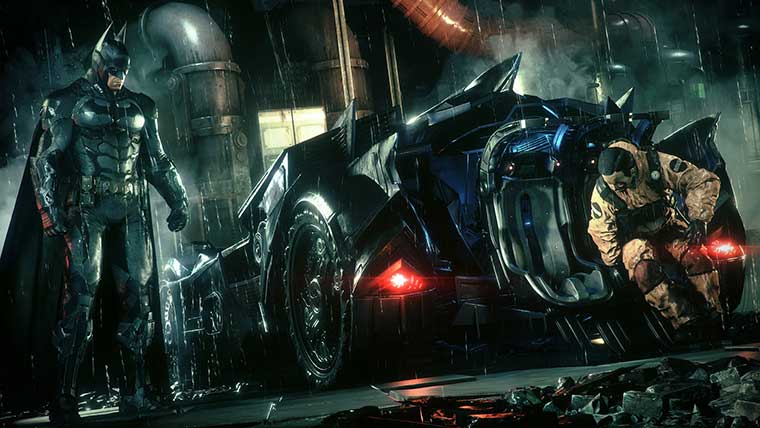 Batman: Arkham Knight marks the end of an era for Rocksteady Studios and the finale in a trilogy of Batman Arkham games from the developer. A series that debuted in 2009 with Batman: Arkham Asylum, Rocksteady showed incredible care and tact in dealing with the popular comic’s source material. There still hasn’t been any game based on a comic book character that has been as well realized as the Batman Arkham games, putting you in the shoes of the Caped Crusader with all the gadgetry and power you would expect. Rocksteady Studios has always nailed the core pillars with the Arkham Games. They craft beautiful environments with an incredible attention to detail. Combat is thunderous and fast. Bits and pieces of Batman lore are strewn throughout the world in interesting ways, with things like Riddler Challenges, and a who’s who cast of baddies from the Batman universe.

Arkham Knight picks up shortly after the events of Arkham City, where a power vacuum takes place in the criminal underworld of Gotham. Scarecrow surfaces as your major new threat to peace in Gotham City as he plots to release a deadly toxin on its inhabitants. Though if Rocksteady has proven anything, it’s that they’re fully capable of telling a story with twists and turns, some you’ll expect, others you most certainly won’t. That’s probably attributable to just how closely Rocksteady played their cards to their chest with marketing for the game, something that other game developers and marketing departments can take note of. It makes for an incredibly enjoyable story when its best bits haven’t been spoiled by the onslaught of trailers that are designed to get you excited for the game.

Built on a sound foundation, almost every element of the previous games that fans loved returns once again — major changes to things like combat, puzzle solving, and traversal aren’t apparent. If it wasn’t broke before, there was no need to change it in significant ways. Batman: Arkham Knight is still very much an open world game that offers players a lot of variety in their activities as the world’s greatest detective. The tried and true gameplay elements of the Batman Arkham games return in Arkham Knight, though most have been revamped and polished in some way. You’ll still encounter tactical combat segments, all-out brawls, detective mode puzzles, as well as the freedom to explore the beautifully realized and massive city. You’ll find all of this whether that be in progressing down the main story path or veering off onto the game’s many side elements. The core of Arkham Knight is not a huge deviation from the previous games.

The biggest addition in Arkham Knight is the Batmobile, Batman’s most powerful ally in the game

However, there have most certainly been some changes. The biggest of which is in the inclusion of the Batmobile, Batman’s most powerful ally in the game. Surprisingly well implemented, the Batmobile manages to avoid feeling like a gimmick, but for fans of the previous games it will take some getting used to.  Batman uses the iconic vehicle in a number of ways. It’s used not only to traverse the sprawling metropolis, but to solve puzzles, engage in battle, and get the hero out of tight situations.  Most of the Batmobile’s implementations are fantastic.  You can fluidly transition between being in and out of the car, and can control it remotely to accomplish tasks fit for a helping hand.  These situations are great.  We’ve seen it before, Batman cornered, only to call in the Batmobile for back-up.  These moments in Arkham Knight are incredible.  It’s when we’re forced into long combat segments with a seemingly never ending supply of enemy tanks where the Batmobile is at its worst.  It’s not horrible, but these combat sequences feel like they crop up too often and extend for too long in Arkham Knight.  Furthermore, many of the game’s missions incorporate the Batmobile in some form or fashion.  Even Riddler challenges have you take the car into some situations, racing through deadly obstacle courses or the like.  It’s been one thing really lacking from the Batman games.  His vehicle is one of Batman’s best tools, and Rocksteady really nailed the feeling of power that having this item at your disposal should give.

While combat is still mostly rooted in the acclaimed systems from Asylum and City, Arkham Knight’s hand to hand action has seen changes as well. There’s a number of new enemy types that will require re-learning for mastery, but the fluidity and brutality still remain.  Batman hits hard, transitions from opponent to opponent with grace, and the combat has a rhythm that is unmatched by the many other games that have tried to take a page from Rocksteady’s book.  Though a couple of new systems have been implemented.  Fear takedowns allow Batman to take out enemies in quick succession assuming he catches them off guard.  You can also utilize items in any given area for environmental takedowns, depending on where you are and what’s available.  Batman can also team up with his partners to do dual takedowns, available only when you are working as a team with Catwoman, Robin, or Nightwing. These additions are smart and fun, adding a bunch of visual flair to the combat.  Dual takedowns in particular are an interesting inclusion to the core combat system, one that doesn’t break the flow of the action one bit as you transfer back and forth between characters in the process.  Again, it really nails the feeling of fighting side by side with another superhero, eventhough you’re doing it all yourself.  Like everything in the Arkham games, these additions all funnel back into channeling the power of Batman to the player. 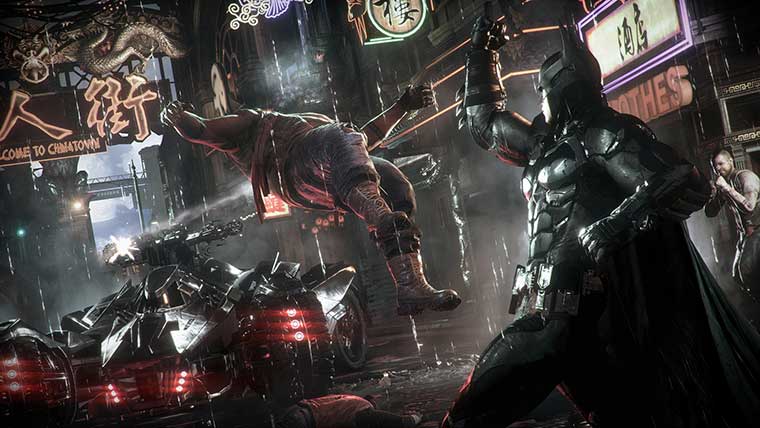 Arkham Knight’s many features all funnel back into channeling the power of Batman to the player.

It’s major changes aren’t many, but Arkham Knight’s biggest differences only build on the experience.  Those familiar with the previous games will find a progression system similar to what we’ve seen before, where upgrade points are earned and can be spent on various power-ups for Batman in different areas like combat, his suit, the Batmobile, and others.  Slight tweaks to the way side mission content is delivered to the player give Batman’s many missions a more organic feel.  You can quickly and easily select which branch of missions you want to follow, and some of them will require that you’ve progressed down other paths.  Arkham Knight feels many layered, with so much open world content to explore to the point where it can feel overwhelming at times.  There just aren’t too many misses on all this content, either.  Most, if not all of the side mission and main story content is fun to play and well designed.  Rocksteady varies Batman’s activities well, peeling back layer after layer of fun for the player.

Batman: Arkham Knight’s gameplay and narrative is so tightly wound that you sometimes forget its impressive presentation. There’s a lot going on in Arkham Knight visually.  The city is extremely detailed, a feat for something so large.  It’s full of color, full of ambiance.  The Arkham games have all been beautiful, but taking this one to new gen consoles and PC only has brought us a far more fetching visual experience.  On the PlayStation 4, Batman: Arkham Knight is a stunner.  It looks well and plays smoothly, things like framerate drops and stuttering aren’t visible to the naked eye.  Even in the most hectic of situations, Arkham Knight stays rock solid technically, and artistically it’s a Batman lover’s dream.  This prowess in presentation carries over to the audible side of things as well. Kevin Conroy, Nolan North, Troy Baker, and Tara Strong all put in solid, believable performances for their characters. At the end of the day, Arkham Knight is a package where it feels no corners were cut, and a high bar set for AAA development in terms of presentation.

Rocksteady Studios leaves Batman behind at the top of their game in terms of visual presentation, gameplay, and storytelling. We may never see another series that captures the essence of this superhero so perfectly, and they should be applauded for that. While Arkham Knight’s innovations are few, they are impactful and smart, and all work towards the common goal of giving the player the ultimate power fantasy of being the Batman.