The latest news in the world of video games at Attack of the Fanboy
Updated January 15th, 2014, by AOTF Staff

Launch for Battlefield 4 on the PlayStation 4 has been rocky to say the least.  For almost a week and a half, the game has been broken.  Recently, a patch remedied most of the issues plaguing the PS4 version of the game, making it arguably the must-have shooter for the new console.  Short of a high-end PC, Battlefield 4 on the PS4 is the best Battlefield experience around.  Higher resolution than the Xbox One, this is the definitive version for console players to own.

Battlefield 4 on the PlayStation 4 is a better all-around game than its counterparts on the Xbox 360 and PlayStation 3.  The Frostbite Engine is an absolute beauty on the new console.  It makes for a better single player and multiplayer experience.  Higher player counts on modes like Conquest and Rush are something that console players have yet to experience, and it’s easy to see why PC players adore Battlefield for its size and scope.  There’s no better showcase for a game that relies heavily on vehicles than large, sprawling, dynamic maps — Battlefield 4 has them in spades.

While the single player campaign may still be a throwaway affair, it’s absolutely stunning on the new console.  Battlefield 4 is not going to win any awards for its story telling, but the added visual upgrades make it fun to trek through yet again.  And with DICE’s flair for the visually dramatic, it’s better the second time through.  The Battlefield 4 single player campaign might be the best looking game on the PS4 at launch. As we said in our Xbox 360 review of Battlefield 4, this game does nothing out of the ordinary to set itself apart from the legions of other Call of Duty wannabees in single player.  It takes you down a largely forgettable 6-hour time sink, that never really hits any sort of emotional highpoint or lowpoint.  The graphics definitely improve the experience, and there’s a lot to marvel at in Battlefield 4’s campaign.  Playing it a second time was more enjoyable on the PlayStation 4, because of the graphics, and nothing more.  Many of our comments from the last gen review hold true here.

“It falls into all the traps that bad shooters do.  It uses excessive gating, you’re are constantly waiting for your AI squad mates to show up and open a door for you.  It introduces broken mechanics that are supposed to be pillars of the gameplay.  The single player works around a squad mechanic that allows you tell your AI squad who to attack and when, but it doesn’t work half the time.  The AI is bad on both sides.  Enemies will just stand there, mindlessly firing round after round at you, and your team will fire back for minutes without hitting anything.  The end result of most firefights is that you just end up going in and killing everyone, yourself.  Your team just ends up being a group cheerleaders, telling you nice shot after you’ve completely decimated a small army on your own.

That said, the Battlefield 4 campaign has zero replay value.  Unless, you are coming from the PlayStation 3 or Xbox 360 to the PS4 version.  There’s plenty of reasons to play through it again, if you want to see the next-gen system in all its glory.  But once you’ve gone through it on the new hardware, there’s very little reason to do it all again.  The story is lackluster, and never really builds into anything more than series of spectacles showcasing the power of the game’s engine. 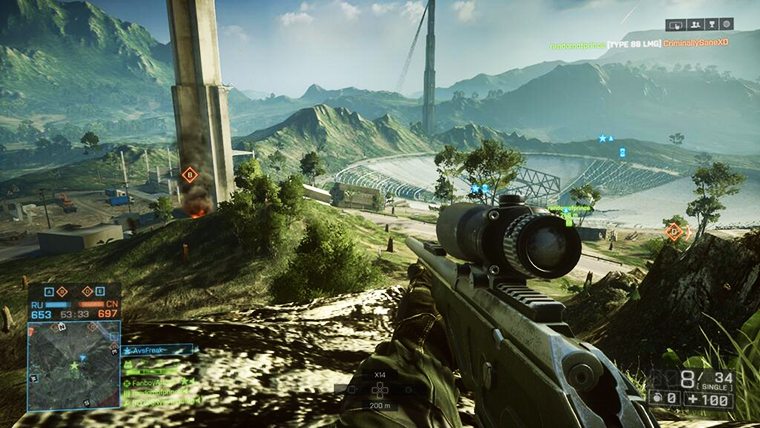 Battlefield 4 on the PlayStation 4 is the way the game was meant to be played.  It’s as close as you’ll get to a high-end PC experience, without spending high-end PC money.  Increased player counts and larger maps are just the tip of the iceberg when it comes to what console players have been missing over the last few years.  But it’s the most noticeable.  The popular Conquest Mode is a whole different beast with higher player counts.  There are more objectives on the map, more enemies to shoot down, and more chaos.  It lets the Frostbite Engine spread it’s wings, without the confining specs of the last-gen hardware.   It’s absolutely beautiful.   Battlefield 4 multiplayer on the PlayStation 4 puts other shooters to shame in both the visuals and gameplay.  So many players, so much destruction, this is a game that really takes advantage of the new hardware, and not just from better resolution.  There are just better effects.  The destructible elements of Battlefield 4 are a big part of the game, they look far better on the new console.

Since the release of the patch, things have gotten exponentially better for Battlefield 4 on the PS4.  Connection issues seem to be a thing of the past.  The issues that remain seem to be isolated to non-game breaking bugs, like graphical glitches when using certain scopes, and sound cutting out occasionally.  While that keeps Battlefield 4 from being perfect, it’s pretty damn close as far as online multiplayer shooters are concerned. The gap has been closed between Battlefield 4 on the PC and consoles with the PS4 version. The Xbox One version just feels like there’s a little more distance between the two platforms, but better nonetheless. If you’ve never played a Battlefield game before, and didn’t own Battlefield 4 on the Xbox 360 or PlayStation 3, you can check out our last-gen review of the game for more of our impressions on the core game features like Levolution, the progression system, and other facets of the multiplayer experience.

Battlefield 4 is on the PlayStation 4 is a considerable upgrade, and its one of the only cross-generational games to make such a large leap in terms of both fidelity and gameplay.