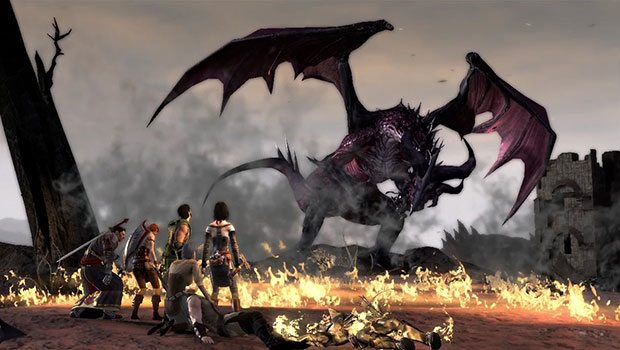 Bioware recently revealed new details about Dragon Age III Inquisition at the Edmonton Comic and Entertainment Expo. Mike Laidlaw and other members of the Dragon Age III team discussed the scope of the RPG, customization options, and other features in the 2013 release. Cameron Lee, the producer on Dragon Age 3 did a live-tweet of the panel for his followers on Twitter.

Bioware explained that Dragon Age III will be much larger in terms of size and scope, revealing that one level in the new game will be as big as all of the levels in Dragon Age II. This would address at least one issue that many fans of the Dragon Age franchise had after the release of the sequel in 2011. While there was no gameplay revealed that proved this bigger scope for the game, the company did release the concept art below, which does lend to their statements.

The Dragon Age team also revealed that character customization in Dragon Age III will have a better focus than in Origins, with the ability to customize followers as well. During the panel, Mike Laidlaw also revealed “castle control”, showing the panel attendees a castle and teasing “you may or may not take control of it”.

It looks like Bioware has taken fan concerns into serious consideration for Dragon Age III. Right now, the game is due for late 2013 and we’ll likely be hearing a lot more about it over the next year.