The latest news in the world of video games at Attack of the Fanboy
February 26th, 2016 by Scott Grill 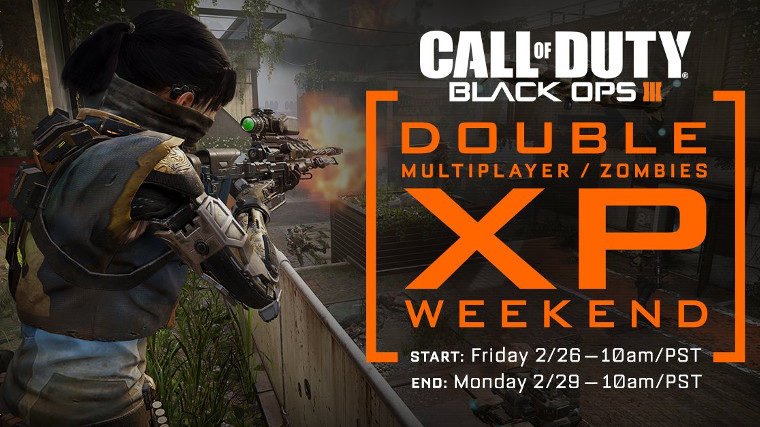 Call of Duty: Black Ops 3 players have another Double XP weekend to look forward to while PC gamers can give the game’s multiplayer modes a spin for free. Activision and Treyarch announced yet another Double XP event for multiplayer and Zombies starting Friday for the PlayStation 4, Xbox One, and PC.

The Double XP Weekend kicks off at 1 p.m. ET / 10 a.m. PT for Call of Duty: Black Ops 3 and runs through Monday, February 29 at the same time. Meanwhile, the free multiplayer weekend for PC gamers is live on Steam now and will run until Sunday, February 28 at 4 p.m. ET / 1 p.m. PT.

The free multiplayer weekend for the PC also comes with some discounts on Steam. The standard edition of Black Ops 3 is discounted 34 percent to $39.59 while the Digital Deluxe edition is marked down 20 percent to $79.99. These prices will be good until Monday at 1 p.m. ET / 10 a.m. PT.

Interestingly, the discount announcement comes with the following caveat: “Customers who play the Multiplayer for free are not eligible to buy the discounted upgrade to full game.”

The latest Double XP event and the free multiplayer weekend for PC is to mark the release of the Awakening DLC for the Xbox One and PC on Thursday, March 3.