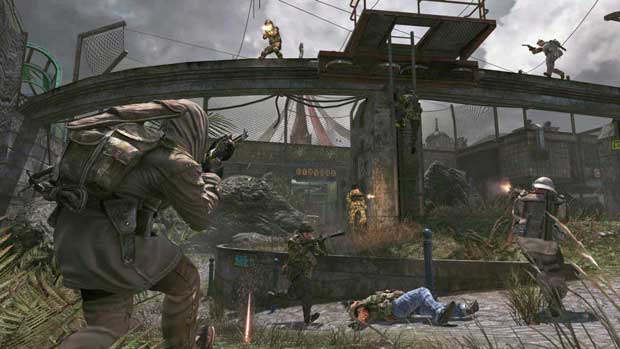 Call of Duty: Black Ops will see its second map pack released on May 3rd. The DLC will arrive on Xbox 360 in a just a few short days and will once again be familiar territory for Call of Duty veterans. The pack will include four new maps and one zombies co-op map, very similar to its predecessors. We got a glimpse of the multiplayer maps in Treyarch’s developer diary of the DLC last week, and this week we are treated to more footage from the multiplayer maps in Call of Duty: Black Ops Escalation.

It’s a much lengthier look at how the maps play out. The first video features the Hotel and Zoo maps and as you can see the action is hectic, as expected.  Just like the first map pack, the levels will have a level of interactivity to them.  As seen in the video you can see the strategy involved with the Hotel map’s elevator.  Zoo reminds us of the Carnival map from Modern Warfare 2, with plenty of wide-open space for snipers to pick off their prey.  You can also see the monorail in the video, albeit briefly.

The second video features Convoy and Stockpile.  If the first two maps showcased were the glitter, these two are the grit.  Both having a more traditional Call of Duty look and feel to them.  The snow covered map in Stockpile isn’t something that fans of the franchise aren’t familiar with, and as every other snow covered map in the game, is a bit dull on the visual side of things.

Still no word or gameplay footage from the zombies mode titled “Call of the Dead”, but with just a few short days until the map pack releases we should hear something soon.