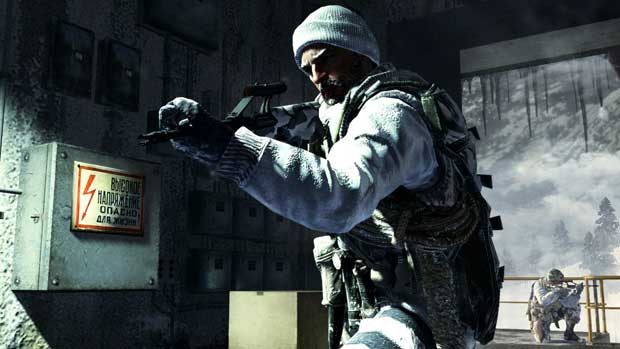 Call of Duty: Black Ops First Strike Map Pack  contains 5 all-new maps including “Berlin Wall,” the Arctic “Discovery,” Hong Kong‘s “Kowloon,” the sports complex “Stadium,” and the new Zombies level “Ascension.” Available exclusively on the Xbox 360 for a period of a month Xbox 360 gamers can get their hands on First Strike on February 1st, 2011.

The Black Ops First Strike Map is definitely targeted at the hardcore Call of Duty player, or the casual player that plays regularly.  The map pack is exactly what it’s titled.  It contains a multiplayer expansion of four maps which can be used across a variety of gametypes.  It also includes a new full episode of the Zombie gametype, which includes new powerups, enemies, and location.

As good as the map pack is as a whole, the First Strike expansion’s star is the new zombie mode that is included in the game.  The protagonists from the previous zombie modes return to glory with a slew of new weapons, some updated enemies and some intense gameplay and differs quite significantly from the other zombie modes.  New perks that alter the gameplay were included like the PhD Flogger and Stamin-up alter the way that you play the zombie mode.  The biggest are ultimately coolest addition to the zombie mode is the cosmic gorilla.  The screen starts turning red and these little monkeys will start coming from everywhere to steal your hard earned perks.  It’s very similar to the hellhound events from the previous games, but it sure adds a bunch of graphical flair to the game.

In the Zombie mode, you will start off in Black and White. Much like previous zombie maps you will open doors to make your way to a power generator which must be turned on to interact with devices across the map.  A rocket propelled lift can take you from area to area, but instead of the teleporter like previous versions, you get a nice skyline view of the chaos that ensues below.  For the most part the core principles of the game haven’t been changed.  You still are looking for treasure boxes, guarding windows, and collecting power-ups in the fight to hold out for as long as you can.  Some interesting new weapons were added as well, but I can’t say that I got hands on them, I unfortunately wasn’t lucky enough.  But those of my teammates that did, described them as Awesome, and I can attest to them at least looking cool.  The Gersh Device and Matryosha Dolls are the ones to look out for that are new to the mode.

Nothing freshens up a multiplayer experience like new maps.  In First Strike, Treyarch took this even further by adding some really cool functionalities into the maps, bringing them to a whole new level of interactivity.  Included in three of the four maps are these interactive elements.  Kowloon includes a zip line to speed up travel between parts of the map.  Berlin Wall has an alley of death as I like to call it, where if you step inside automated sentry guns will rip you to shreds, and lastly the Discovery Map has collapsible bridge which can be imploded by grenades or rockets.

All in all the maps have a great level of polish to them, and are fun to play.  The inclusions listed above make some like the Berlin Wall a pretty neat experience.  The zip lines of Kowloon seem way to obvious for campers to just pick you off, to have any real use in Deathmatch type game, but can be quite useful in objective type games.  The level of detail in the maps is amazing though, Discovery’s Northern Lights, The Dancing Rain of Kowloon, and the Blood in the Snow of the Berlin Wall really give each map some much needed personality.

Stadium stands out to me in First Strike as the bad apple of the bunch.  Although it’s a well designed map, it doesn’t have the personality or flair of the other maps.  It’s fairly straight forward, and I would have liked to see the same type of interactivity as the others.  Early goings of the First Strike release have been pretty smooth, as far as being able to download and play the new maps with gamers across the Xbox Live network, but Zombies mode has been having some connection issues which is quite nagging when you’re pushing up into the levels only to get disconnected from server error.

I like Call of Duty. For me, the First Strike Map Pack is a no brainer.  The added value and extended gameplay that you get for $15 is well worth it in my opinion.  And for the millions that log in a play everyday I think they will agree as well.  Some of the added effects placed into the levels give the game a small dynamic twist, but it’s nothing truly groundbreaking.  The multiplayer additions aren’t going to change your mind on the game if you didn’t like it to begin with, but Zombies just might.  Cosmic Silverbacks FTW.