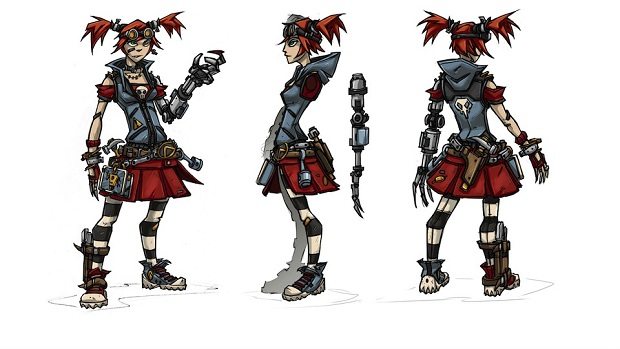 We’ve been amped for any news concerning the new Mechromancer character class ever since we learned that Gearbox had begun working on DLC For Borderlands 2 well before the game has even hit store shelves, and that this new class would launch about 60 days after the game’s release. In a recent interview with Eurogamer, Borderlands 2 lead designer John Hemingway describes the Mechromancer in more depth and even gives us a glimpse of what her skill tree may look like come September.

As we’ve previously seen though concept art, the Mechromancer appears to be a pig-tailed redhead with a punk rock look and mechanical alterations. Hemingway told Eurogamer that the character’s main skill is the ability to summon “Deathtrap,” a souped up robot that can deal out damage as well as draw enemy fire away from the player.

The Mechromancer’s skill tree, titled “Best Friends Forever,” will reportedly feature attributes intended for players who sorta suck at first-person shooters. One skill called “Close Enough” will allow its user to shoot anywhere in the vicinity of an enemy, not necessarily at them, and the bullets will find a way to do damage, almost turning enemies into literal bullet magnets. With this skill, bullets will ricochet off of walls and objects and will still follow a trajectory toward the nearest target. Hemingway also hinted toward a possible “shock gameplay tree” for the Mechromancer, saying, “It’s all about shields and electrical damage. We’ve never really had an electrical-themed character skill tree. So that’s exciting to me.”

The character’s skill tree will also feature skills that can teach Deathtrap new abilities. “Explosive Clap” for example, enables Deathtrap to move toward a group of enemies and slam them together, initiating an explosion which also deals out collateral damage.

“It’s a bit of a departure from the norm,” said producer Randy Varnell. “To have a class summoning another person for them to attack, that’s outside anything else we’ve done in Borderlands before.”