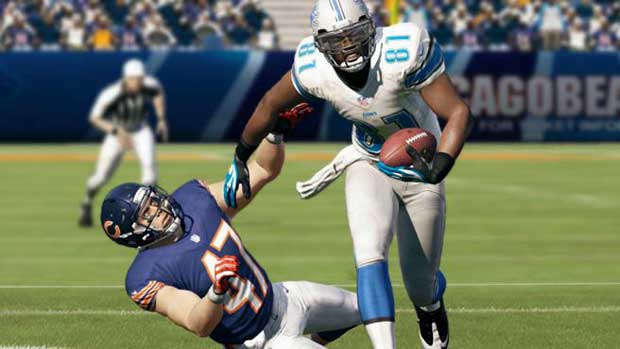 EA has announced that Calvin Johnson will be your cover athlete for Madden NFL 13, after fans voted the wide receiver from the Detroit Lions above 63 other players.  The cover of the yearly football title was recently unveiled in Times Square, where EA hosted a celebration in honor of the selection.

Calvin Johnson held off the rookie phenom Cam Newton of the Carolina Panthers to take home the honor of gracing the consoles of cyber jocks everywhere, come fall.

Of course this also opens Calvin Johnson to the almighty “Madden Curse”.  One that has stricken down players that make the cover of the football title, year after year.  Peyton Hillis, who had a breakout year in 2011, saw a multitude of ailments that kept him off the field for nearly half the season.

Previous athletes to have been affected by “The Curse” include Drew Brees in 2011, Troy Polamalu in 2010, and stretches all the way back to 1999 where Garrison Hearst suffered a broken ankle that kept him off the field for two years.  Lets hope that “The Curse” has no effect on Johnson’s play in 2012, but it would probably be wise to avoid him in your fantasy drafts this fall.

Madden NFL 13 will arrive on August 28th for the Xbox 360, PlayStation 3, Nintendo Wii, PS Vita  and will feature a slew of new features, that were announced earlier today: