Weather will be the ultimate weapon in Company of Heroes 2 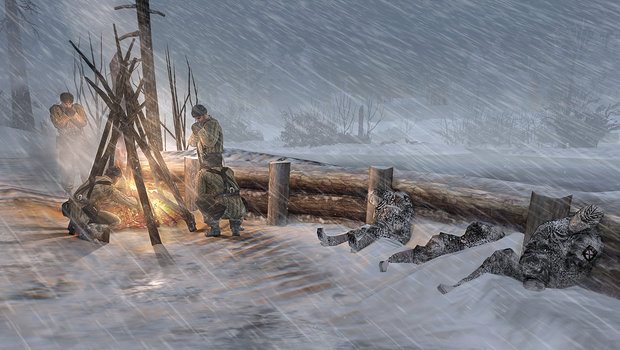 You’ve played games of the RTS genre before, and you’ve certainly played games grounded in the harsh setting of WWII. Perhaps you’ve even played games that blend both elements together. But Relic Entertainment and THQ are attempting to provide you with a take on the WWII setting that you haven’t yet seen with Company of Heroes 2, and they’re implementing innovative weather condition simulating technology to the make the experience a more realistic and visceral one than you’re accustomed to.

Company of Heroes 2 will  feature the USSR’s Red Army as a new faction and will take players to the Eastern Front, from Operation Barbarossa (Nazi Germany’s plan to invade and occupy the Soviet Union) to the Battle of Berlin. During Germany’s invasion of the USSR, Hitler and Nazi ground forces were severely hindered by the unrelenting Russian winter, giving Soviet troops a significant advantage. In Company of Heroes 2, the harsh conditions will be realistically simulated thanks to Relic’s Essence Engine 3.0 and its “ColdTech” system.

The technology introduces an “extreme cold” mechanic which is said to “accurately encapsulate the Soviet winter which reached extremes of -40 degrees F in 1941,” whereby human skin can freeze in a matter of minutes. On winter maps in Company of Heroes 2, infantry units exposed to the bitter cold will gradually freeze to death unless the player keeps them warm by building fires and garrisoning them in buildings. Dynamic blizzards generated randomly in-game will increase the effects of the cold making it even more hazardous to leave infantry in the open.

The ColdTech system not only allows for snow to be dynamically removed off of objects and persons should the player choose to do so, it also has a realistic depth that can impact troop movement or give away unit positions by leaving vehicle tracks and solider foot imprints. Additionally, the tech enables the player to use ice to their advantage as it can collapse or be destroyed underneath enemy units in given spots, plunging them into the hypothermic waters.

From what we’ve seen and heard so far of Company of Heroes 2, we’re extremely impressed. The sequel to the most critically-acclaimed RTS of all-time (according to GameRankings) looks to present an entirely different approach to the otherwise hackneyed WWII genre. The game will explore the sheer sacrifice required to confront one of the greatest evils this world has ever known, as well as the unforgiving impact such sights and conditions had on the average infantry soldier.