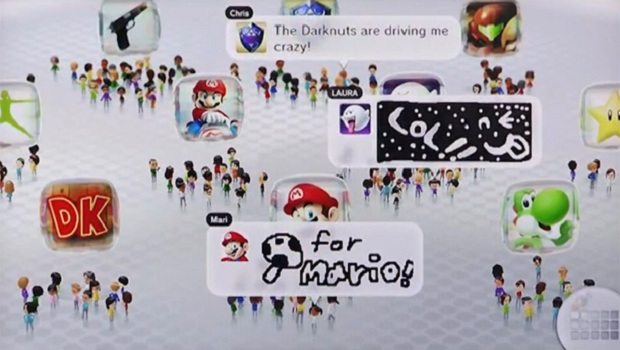 Fresh off the disappointing announcements that the Wii U will not support two GamePads at launch nor will it support online multiplayer for Pikmin 3, Nintendo has another somewhat puzzling proclamation that will fuel Wii U critics for the foreseeable future: the Miiverse won’t be integrated to your favorite social media sites.

Nintendo is reportedly concentrating instead on integrating the Miiverse directly into the system menus and games of the Wii U as users will have the ability to communicate through text and video. But note, Nintendo will be closely monitoring all messages between users to prevent inappropriate content from seeping through the company’s “family” environment. And no, we’re not saying that sarcastically. The moderation process for user messages will create up to a 30-minute delay.

With the Wii U and many of its features, Nintendo hopes to cater to that ever elusive “core” audience that it has lost touch with in past years. While they continue to build vital third-party support (an aspect the Wii severely lacked and suffered from) and seem to be dedicated to developing their first well-structured online network, it’s the overlooking of simple implementations like these that should make Nintendo fans scratch their head.

Sony and the PS3 allow users to show off their collection of trophies and share game and event related information with friends on Facebook. In addition, they can browse their PSN friend list and check friends’ PSN status to see if they’re online, skim through their trophy information and compare it with their own, and invite Facebook friends to become PSN friends. Microsoft on the other hand, has a fully-developed Facebook app available for the Xbox 360 in which you can share beacons, Achievements, and other items directly from the Xbox Dashboard. You also have the ability to update your status, browse updates from your friends and view photos, and you can link your Facebook profile to your Gamertag to find your Facebook friends and connect with them on Xbox Live.

The reason for the Miiverse’s lack of social media integration? Nintendo does not want to offer a service that is already widely available on multiple devices. “I have three devices permanently doing that already, what is our benefit to do so also?” said Nintendo of Europe’s Laurent Fischer.

Gee, I don’t know. How about the ability to share gaming information and notable accomplishments with friends? Or the chance to connect with others across multiple networks who have similar gaming interests and preferences? Or, the option of being able to subtly brag to your entire friends list on Facebook about how you have a Wii U and they don’t. How are you supposed to boast that you’re playing New Super Mario Bros. U while watching the latest episode of Game of Thrones all within the same room? With the Miiverse, you’ll still be able to…but only to other Wii U owners…and it’ll take about 30-minutes.