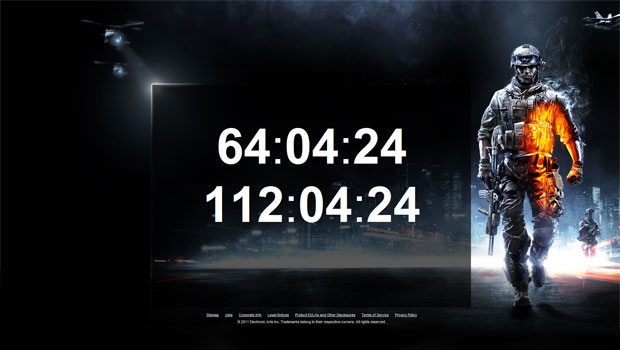 A website has sprung up on the internet displaying two separate clocks counting down to some unspecified event taking place this Wednesday (according to the first timer) and 48 hours later (according to the second). The site appears to be trademarked by Electronic Arts, is entitled “Physical Warfare,” and displays a portion of the Battlefield 3 case cover as its background. Considering the fact that those who preordered the game on Origin and those who purchased the limited edition of Medal of Honor will get 48 hours early access to the BF3 beta and the clearly obvious references to the game on the website itself make one wonder if this is truly counting down to the long awaited beta or if someone is making some sick joke.  Activision may remember the recent commotion over a little fan made site entitled modernwarfare3.com which turned out to be a bash of Call of Duty and an endorsement of Battlefield 3 that gave some BF fans a good chuckle.

Seeing as a picture showing the opening screen of the beta for Xbox 360 appeared on Twitter the other day also leaves people to wonder if the beta is truly ready and we will soon be getting our anxious little fingers on said trial. DICE community manager, Daniel Matros, claims the site is fake, but hasn’t said the normal ‘DICE nor EA is ready to confirm a date for the beta’ and seems a little coy on the matter. Plus, as stated, the site bears EA’s typical trademark and legal jargon and hasn’t been taken down despite being online for several hours and has been made aware to DICE. We will have to wait and see. The beta is set to be on PC, Playstation 3, and Xbox 360 this month (possibly this week) with the release of the full game on all these platforms on October 25 in North America.

So I did a little more digging about the website in question and it looks like the site may be fake after all. Despite having the standard EA trademarks, the website appears to not be registered by Electronic Arts, but by someone in Norway. According to a search on whois.net ( http://www.whois.net/whois/physicalwarfare.com ).