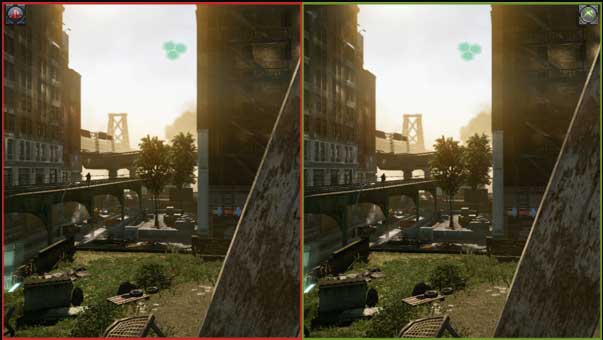 Leading up to its release Crysis 2 received many criticisms, reviewers and gamers at multiple gaming sites examined demo codes of the game and came to one conclusion: Crysis 2 looked better on the Xbox 360.  Whether that was from setting’s faults on the PS3, old code used for the demo build of the game, or just bias, we’ll probably never know.

Now that Crysis 2 has released for Xbox 360, PS3, and PC we’ve seen a couple of things.  The first is that reviewers have scored the game equally on both platforms, with the PS3 and Xbox 360 versions of the game each currently holding an 87 on Metacritic.  Although many PC gamers voiced their opinions across the internet, the PC version of Crysis 2 had the strongest average of scores with an 88.

We’ve looked at plenty of comparison screenshots over the past couple of weeks leading up to release, and now finally with a verdict freshly in from our friends at Lens of  Truth, our expectations have been confirmed.  Crysis 2 looks and plays equally well on both consoles.

Without a doubt, Crytek has delivered a graphical masterpiece with Crysis 2, and the best part is, you’ll enjoy it no matter which console you play it on. Although both versions have their pluses and minuses in the performance category, graphically they look virtually identical. Crytek has done the almost “impossible” by developing one of the closest cross platform titles this generation. In the process, Crytek has proven that CryEngine 3 is the best looking and most accurate cross platform engine on the market. Again, hats off to Crytek. Now go enjoy this game!

We included a small taste of the comparison that was done over at Lens of Truth but there are more videos, a ton of imagery, and of course the Lens of Truth Staff picks for the game…Check out the full comparison here.