Crysis 2 on Its Heels Over Criticisms 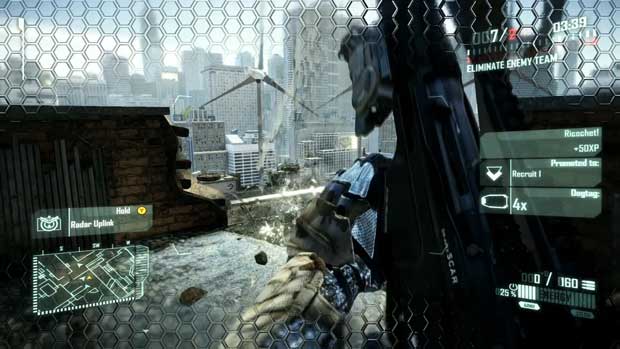 Crysis 2 has been recieving a ton of negative press leading up to its release.  First, the demo for the PS3 version of the game came way late to the party.  To some it signaled a problem with that version of the game, and that’s before IGN came out and called it flat out bad.  When one of the biggest online publications on the planet talks, people listen.  People even go as far as to jump on the band wagon blindly.  After seeing the game at GDC, IGN had this to say about the PS3 version of Crysis 2:

“The performance of the PS3 version is pretty underwhelming. The framerate is frequently low and choppy. There are jagged lines everywhere, and shadows are especially messy. There’s a muddiness to the graphics that’s hard to stomach in the wake of the PS3′s other flagship showpieces, and worse, the variable framerate really hurts controller response.”

Natham Camarillo of Crytek recently sat down with The PlayStation Blog to issue a challenge to gamers.  The executive producer declared that there is no meaningful difference between the two console versions of the games.

“I’ve gone on the record saying that if you stick PS3 and 360 side by side I would challenge anyone to find any meaningful difference. I don’t see it at all.”

But you’re gonna have a hard time comparing the versions of the game.  EA recently announced that the short lived demo is being pulled for quality control purposes leading up to the release. They noted that they want the game to be perfect, and I imagine, stop the bad press this close to the game’s release.

I guess we’ll see how this plays out in the coming days when Crysis 2 releases for the Xbox 360, PC, and PS3.  Having put all three demos through their paces, I’m with Camarillo, although there is some blurriness, I can see possibly what IGN is saying.  It just comes down to how meaningful that is to people.  My copy is already pre-ordered for the PS3 and no level of bickering is gonna have me enjoy it one bit less, if what we’re arguing over are shadows and sharpness.

Home / Game News / Crysis 2 on Its Heels Over Criticisms