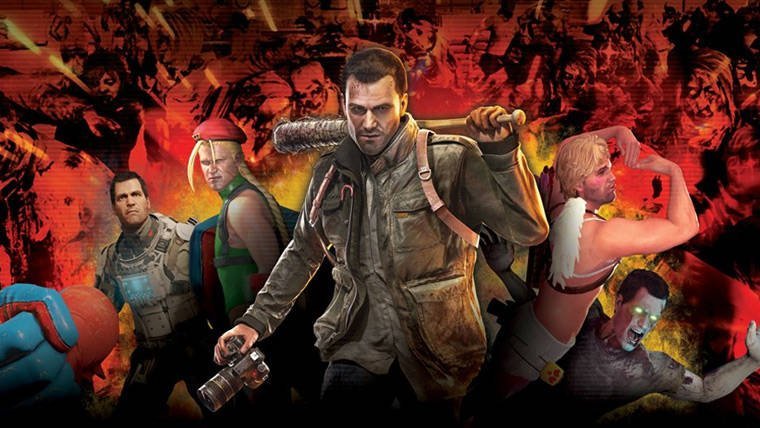 Frank West is back…again, as the intrepid photographer returns in a new version of Dead Rising 4 set to regain the goodwill of the fanbase and provide a much needed sales boost. When the original game launched in 2016 for Xbox One and PC, it tried to combine the best features from the modern iterations of the series with elements from the most iconic entries. The result was somewhat mixed, judging by the public’s reaction. As a standalone experience, Dead Rising 4 was a fine game. However, what really destroyed its reputation among the fans were comparison videos that showed the painful loss of variety, stage interaction, character moves, and gore since the first game.

Fastforward a year later, and Dead Rising 4: Frank’s Big Package is trying to compensate the lack of substance on its main adventure by stuffing the disc with tons of new content. The original package has been expanded with three new modes, which present an even more irreverent take on what was already a very comedy-oriented game. Among the new modes we find Frank Rising and Super Mega Dead Rising 4 Mini Golf which arrived in the form of DLC in the past months, bringing new mechanics to the game.

The star of this re-release, however, is a vastly different take on the main story called Capcom Heroes. It’s an incredibly satisfying mode that transforms the adventure into a Capcom greatest hits arcade. And the Dead Rising franchise is the perfect choice to try this idea, as the irreverent tone of the narration allows for any kind of unreal situations to be easily accepted as part of the reality of the game. Without giving away too many details on the conclusions, Capcom may have been right in thinking that the way to make Dead Rising 4 much more enjoyable was to actually make it a different game. 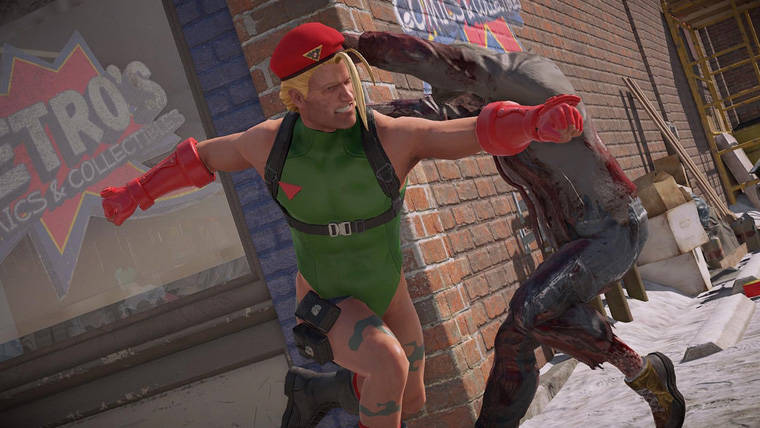 But let’s start from the beginning. It’s been 16 years since the zombie outbreak in the town of Willamette, and Frank West now lives teaching investigative journalism in college. One day one of his most prominent pupils, named Vicky Chu, persuades him into returning to Willamette to invesitgate some secret experiments taking place on a military base nearby. There they discover a sinister plan to increase the power of the zombi infection, and the night ends with Frank falsely accused of terrorism by the government, and his friendship with Vick on the line. After some time living under the pseudonym Hank East, an agent of the ZDC persuades him to investigate a new outbreak in Willamette, which started at the new megaplex during the Black Friday sales.

Dead Rising 4 is both a homage and a parody of classic B-series zombie films. The outbreak is presented on a massive scale, with virtually an endless stream of enemies coming after Frank around every corner. At the same time, the game is filled with huge doses of irreverent humor that invites the player to take the situation very lightly and just have great fun with it. It’s not just Frank’s often sarcastic comments, the game itself is set to present the most shocking and humorous scenes, like person being attacked by a rabid ginger bread figure or a man dressed as a snowman selling items.

Of course, the unusual catalogue of weapons remains a staple in the series, with Frank being able to use chairs, cash registers, knifes, and any routinary item that you can think of against the zombies. The game even invites you to try out different weapons by applying a very strict damage system, in which every weapon we use will only last for a few minutes depending on the type and our level. However we are not likely to be left weapon-free, since Frank can carry various weapons at the same time, and we’ll find plenty of objects in every stage. The wide variety of weapons and combat styles is expanded by the possibility of combine items to create even more powerful and shocking weapons, like a sword fish launcher or an electric axe.

Frank’s camera is also used to break the routine of mass-killing, alternating the action scenes with phases of investigation, in which we use the camera to find clues to solve the mystery behind the new outbreak. The camera is equiped with two additional modes: night vision and spectrum analyzer, the latter being especially useful when it comes to find out paswords. Apart of its essential value in the story, the camera can also be used to take creative shots of zombies, which will then reward the player with points to increase their level. 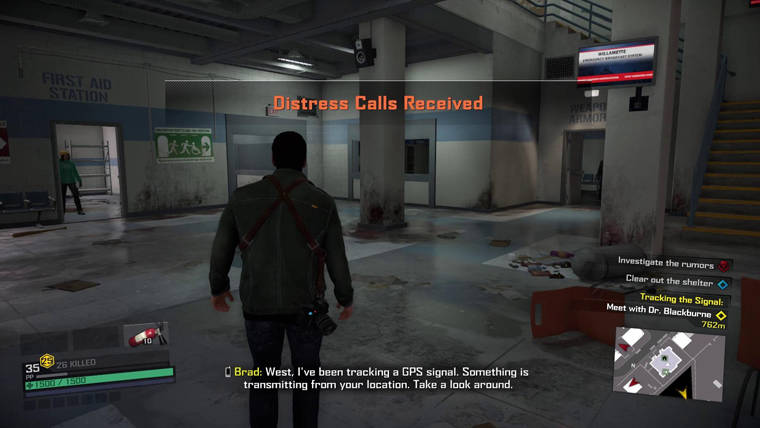 Does the main game still fails the comparison against the original entry? Sadly yes. Even if Frank’s Big Package adds more variety of weapons and more interesting boss encounters, the game still lacks a sense of absolute freedom of action that was present in the original game. It’s very enjoyable by itself, but the weight of past entries is heavy. There is also the issue that for a game released in 2016, the technical aspects could be a lot better. We are talking about plain textures, lack of details, and characters with wooden moves. The use of an open-world, the (admitedly) impressive number of enemies on screen, and running at a smooth 60FPS could justify some of those aspects, but sadly the game is locked at 30FPS, making the experience feel barely more gratifying than playing a good remaster of a game from the previous generation.

Which takes us to the highlight of Frank’s Big Package, and one of the biggest selling points of this edition. We are talking about Capcom Heroes, a special mode that uses the main campaign as a template to offer a really fun, addictive experience, and really special for any follower of the company’s properties. In Capcom Heroes, we follow the main story, with the difference that instead of picking random objects from the environment as weapons, we will collect shiny stars that unlock a series of costumes that transform Frank in a multitude of Capcom characters, to the point of adopting their own attacks and set of skills.

While the main campaign is fun, I truly loved Capcom Heroes. The costume mechanics leave space for a lot of variety gameplay-wise, and the long list of characters ensures that you will always have an alternative way of playing every few minutes. Frank can take the appearance of several iconic figures such as Ryu, Akuma, M. Bison, Cammy and Mecha-Zangief from Street Fighter, X from Mega Man, and others like Dante, Viewtiful Joe, Jill Valentine, and even Okami’s Amaterasu.

While the main campaign is fun, I truly loved Capcom Heroes

To be absolutely honest, when I was playing the game to write this review I completely ditched my advance on the story mode, and instead dedicated all my efforts to the Capcom Heroes campaign. It is that good. The inclusion on an specially surreal Dead Rising entry makes it only more appropriate, as it’s absolutely believable that this more light-hearted and sarcastic version of Frank West would have a lot of fun killing zombies in the style of Mega Man.

Apart from the regular encounters, players will be able to find some special spots in every area that proposes challenges for a specific costume, rewarding with finishing moves and a shadow version of the costume to those who pass the test. While the first set of challenges are fairly easy, they will turn more difficult as the campaign goes on, also depending on the reward and the costume. 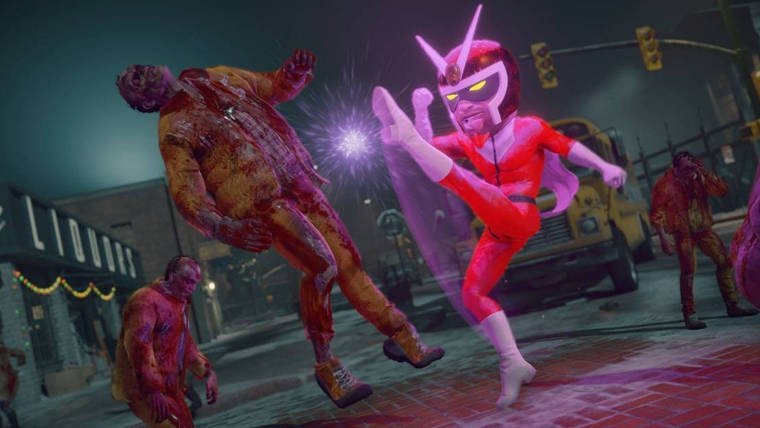 Another fun inclusion is Super Mega Dead Rising 4 Mini Golf. An extra mode previously released as DLC that has more complex mechanics that could seem at first sight, encouraging players to pay attention to the strength of their shot, the direction, and the type of club they use.

Finally, there’s Frank Rising, a main campaign expansion that just like Capcom Heroes, introduces an alternative mechanic to the traditional gameplay, that I won’t reveal in order to avoid spoilers. This mode is not as striking as Capcom Heroes, but it is a welcome addition, especially considering its relevancy in the story.

Capcom has managed to build a much more fun and addictive adventure out of Dead Rising 4, although that comes at the expense of transforming the game into a whole different experience with the excellent Capcom Heroes mode. That addition alone somehow offsets the lackluster graphics, and with a better campaign and all the previous DLC included, Frank’s Big Package is a very attractive product for anyone looking for an absorbing, carefree action game, even if it’s still subpar considered with previous entries in the series.