The latest news in the world of video games at Attack of the Fanboy
February 4th, 2013 by William Schwartz 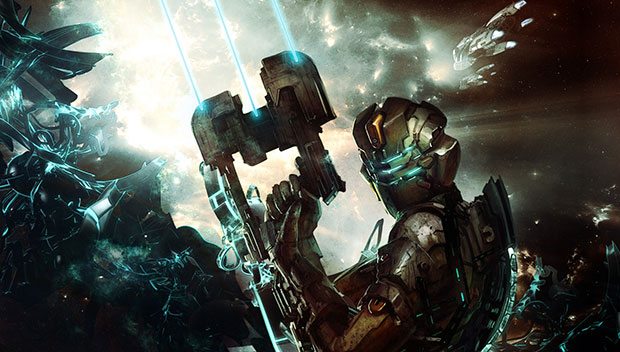 The third installment in the Dead Space franchise hits participating retailers at midnight tonight, and to celebrate the launch of this highly anticipated survival shooter from Visceral Games, we’re giving away a couple of copies of Dead Space 3 to our readers, Twitter followers, Facebook friends, Google + Circles.

In Dead Space 3, Isaac Clarke and John Carver journey to discover the source of the Necromorph outbreak. Crash-landed on the frozen planet of Tau Volantis, the pair must comb the harsh environment for raw materials and scavenged parts. Isaac will then put his engineering skills to the ultimate test to create and customize weapons and survival tools. The ice planet holds the key to ending the Necromorph plague forever, but first the team must overcome avalanches, treacherous ice-climbs, and the violent wilderness.

Haven’t had a chance to try out Dead Space 3? The multiplayer demo is currently available on the Xbox Live Marketplace and PlayStation Store. After you try it, you might not want to wait for the end of our giveaway, which is due to end on Sunday 2/10.

To enter and win a copy of Dead Space 3 on the platform of your choice, simply follow us on Twitter and shoot us a tweet with both @FanboyAttack and #DeadSpace3 as the hash tags or retweet this post. To enter via Facebook, just comment on our Official Facebook Page or on the post for this contest. To enter on Google Plus, simply add us as a friend and comment on the post for this contest. Lastly, you can enter on this post by commenting below. Make sure you use a valid email when using the commenting option so we can get a hold of you if you are randomly selected as one of our winners for Dead Space 3 (U.S. Residents Only).