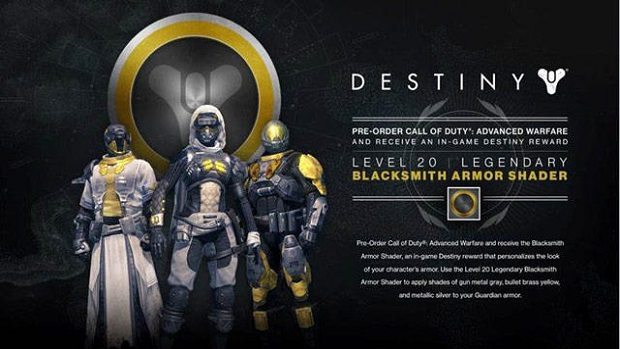 Destiny is all set to drop and fans are excited, but if you are picking up your copy tonight or even tomorrow, you might want to think about pre-ordering Call Of Duty: Advanced Warfare while you are out as it offers up bonuses for Destiny players.

Those who pre-order Call Of Duty: Advanced Warfare before September 21st will receive an in-game Destiny reward via a print-out code at Gamestop. The item is a Level 20 ‘Legendary’ Blacksmith Armor Shader for your character. It is colored to the palette of Advanced Warfare, which features gun metal grey, metalic silver and bullet brass yellow to add to your character’s Guardian armor. Be sure to pre-order it on whatever console you plan to own Destiny or there might be some confusion there.

Destiny is set to arrive on Playstation 4, Xbox One, Playstation 3 and Xbox 360 September 9th. Call Of Duty: Advanced Warfare is set to release on  November 4th for Playstation 3, Xbox 360, PC, Playstation 4 and Xbox One. If you pre-order you will be automatically upgraded to the Day-Zero version which gives you early access to the game, double XP, and extra weapons and items.