The latest news in the world of video games at Attack of the Fanboy
January 15th, 2018 by Jose Belmonte 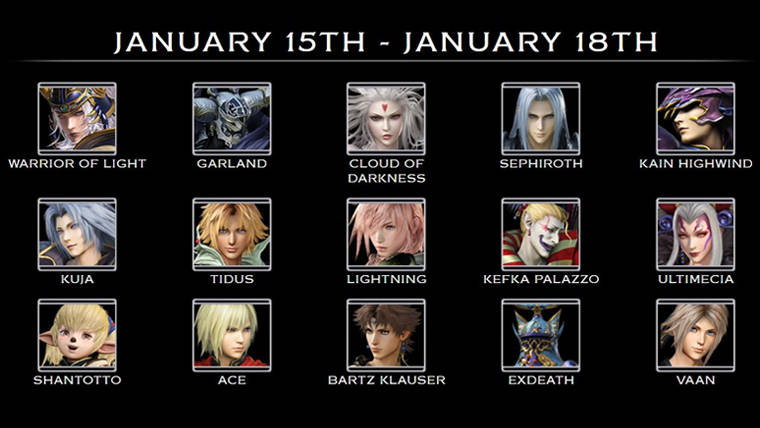 Since last Friday, all PS4 owners can enjoy a beta version of the upcoming Dissidia: Final Fantasy NT for free. Over the course of ten days, the beta will update its content including its roster of characters, as a way to let players try the different fighting styles of each hero or villain. The update that will follow today’s maintenance will substitute the previous selection with many new heroes and villains, including some iconic figures like Sephiroth from FFVII, or Tidus from FFX. It will also be the first time that players can try the skills of Ace from Final Fantasy Type-0, one of the few characters who were not present in the previous games for PSP.

The official account of Final Fantasy on Twitter has unveiled the new lineup of fighters. While the new batch almost completely substitutes the ones present since Friday, some of them will stay available until the 18th, including Warrior of Light, Lightning, and Bartz. The rest of them will be new, including Garland (FFI), Cloud of Darkness (FFIII), Kain (FFIV), Exdeath (FFV), Kefka (FFVI), Ultimecia (FFVIII), Kuja (FFIX), Shantotto (FFXI), and Vaan (FFXII). This new list of characters keeps the balance between fighting classes, simply replacing characters with a specific fighting style like the Emperor with an equivalent like Ultimecia, even if each character possesses some unique attributes and skills.

The third and final update of the beta will be out on Thursday January 18, likely adding the rest of characters that haven’t been seen yet, like Noctis.